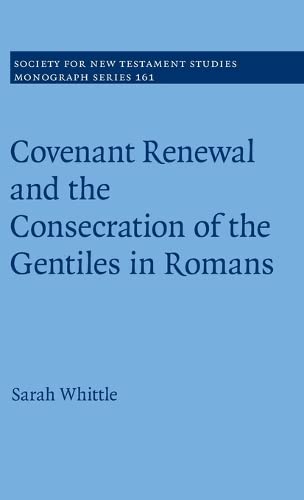 Covenant Renewal and the Consecration of the Gentiles in Romans

In this study Whittle explores “Paul’s engagement with the scriptural narrative of covenant making and renewal, and the inclusion of the Gentiles, in order to determine whether, or to what extent, his use of ἅγιοι is rooted in Sinai and its covenant-making tradition” (p. 2). Important for Whittle, however, here is the contention that it is Deuteronomy’s depiction of Sinai that offers a “literary paradigm for the creation of a people that was to influence Paul” (p. 9).

Given that Sinai functioned as the primary event that constituted the people of God—and that Deuteronomy retells this event in Moses’s farewell address—Paul may have drawn upon Deuteronomy (and other covenant renewal texts) in order to establish the Gentiles as members of this renewed covenant. Paul draws upon this eschatological covenant renewal narrative through explicit Scripture citations (Part I) and broader covenantal motifs (Part II).

In Part I (“Romans 9–11: Paul’s Covenant-Renewal Hermeneutics”) Whittle examines the use of Hosea in Rom 9:24–25 (ch. 2), Deuteronomy 30 in Romans 10:6–8 (ch. 3), and Isaiah 27 and 59 in Rom 11:26–27 (ch. 5). I confess that I found the argument difficult to follow. The reader expects that the influence of Deuteronomy will be given pride of place, but of course Romans 9:24–25 invokes Hosea in order to speak of God’s new act of making the Gentiles his own people. Whittle asserts: “Undoubtedly, Paul’s thought is shaped by the Deuteronomic story of sin, exile and restoration that anticipated a merciful act of God that would enable Israel’s faithfulness” (p. 43). Whittle is on safer ground in chapter 3 since here Paul does explicitly invoke Deuteronomy 30 (and 9) in Romans 10:6–8. Whittle argues that Paul interprets the covenant renewal and restoration of Deuteronomy 30 in terms of “a confession of faith in Christ, as τέλος of law (10:4)” that is inclusive of Gentile believers (p. 45). Paul assumes the broader context of Deuteronomy 30, for Paul presumes that “the Gentiles and the remnant are in Deuteronomy 30” those who experience Moses’ prophetic anticipation of obedience, circumcision of the heart, and the ability to fulfill the Torah (pp. 56–57). It is difficult to tell exactly what Whittle thinks about the function of the Isaiah citations in Romans 11:25–26 given that she largely attempts to reproduce and defend the interpretations of N. T. Wright. The broad point, I take it, is that Paul sees the sending of Israel’s Messiah and the salvation of the Gentiles as God’s faithfulness to his covenant which has been renewed. Whittle summarizes Part I by saying: “Wright’s claim that the ‘great renewal of covenant’, the climax of Israel’s hope, has been fulfilled in Christ is an important one” (p. 74). More specifically, “Paul sees the Gentiles and the remnant participating in the renewed covenant” (p. 75).

In Part II Whittle examines Romans 12–15, though here she selects texts “not because of their overt covenant-renewal citations but because they appear fruitful for following Paul’s theological narrative of covenant renewal and Gentile inclusion from 9–11, drawing this trajectory to the proposed climax: the Gentiles’ consecration (15:16)” (p. 23). Whittle claims that Paul’s use of cultic metaphors in 12:1–2 “is fulfillment language” (p. 80) and should be understood as the appropriate Gentile response to God’s act of covenant making (ch. 5). More explicitly, Whittle is able to discern that the specific sacrifice in view in 12:1–2 is the peace offering, and these peace offerings “are the appropriate response to God’s covenant mercy, carried out at times of covenant making and renewal” (p. 86). Turning to 13:8–10, Whittle suggests that the holy people of God, now inclusive of Gentiles, are able to fulfill the commandments of the Torah (epitomized in Lev 19:18), because God has made good on his promise to renew the covenant by sending the Spirit and enabling eschatological obedience (ch. 6). In ch. 7 Whittle argues that Paul’s vision of a Jewish and Gentile community praising God together with one voice is warranted by the fact that God has fulfilled the promises made to the fathers (Rom 15:8). And in ch. 8 Whittle argues that within 15:15–16 Paul ascribes to himself a priestly eschatological role that is reminiscent of Moses who was “Israel’s priestly covenant mediator at Israel’s consecration” (p. 189).

Whittle has demonstrated that Paul takes up Israel’s Scriptures, particularly certain passages pertaining to God’s covenant and its eschatological renewal with Israel, and reads them with respect to the salvation and inclusion of the Gentiles within the people of God. Her specific thesis, namely, that “Deuteronomy and the Deuteronomic narrative … provide a framework by which Paul is able to incorporate the Gentiles into Israel’s restoration and renewal” (p. 186) is certainly a possibility, but it is in need of further substantiation. The thesis might be bolstered by devoting more work to indicating what this Deuteronomic framework actually is, as well as how it was understood, appropriated, and/or critiqued by authors that are contemporaneous to Paul. Nevertheless, the book is rich with exegetical insights and makes an important contribution to Pauline hermeneutics.