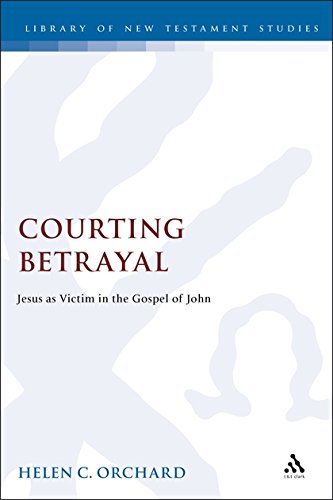 Courting Betrayal: Jesus as Victim in the Gospel of John (JSNTSS 161)

The book is based on a PhD thesis finished under the supervision of David Clines at the University of Sheffield. It consists of a narrative investigation of the character of Jesus as victim. It is therefore not a direct contribution to christology. It nevertheless both presupposes and reinforces a ‘low’ christology of John’s Gospel. This becomes clear in the first two chapters, in which Orchard presents the tension between ‘high’ and ‘low’ christology as the major problem of John’s presentation of Jesus. She locates her study in the context of liberation theology, referring to authors such as Jon Sobrino, Leonardo Boff, Sheila Collins, Rebecca Chopp and Georges Casalis, and agrees with them that theology and especially christology cannot be neutral: ‘Every Christology is partisan and committed’ (Boff). The motif of violence and Jesus as victim links this theological context both with the text of the Fourth Gospel, and with the historical context of the community behind this Gospel: the historical context of an ‘oppressed’ community in conflict with Judaism is described by summaries of the works by J.L. Martyn, R.E. Brown, D. Rensberger and M.W.G. Stibbe. There is an impressive list of textual references to various forms of violence against Jesus: fifteen instances of actual or intended severe physical violence, four instances of direct physical harassment, nine instances of direct verbal harassment, twenty instances of statements of indirect opposition and discrimination, seven instances of death threats against Jesus. Thus, the Fourth Gospel fits a pattern which Orchard infers from her reading of liberation theologians: ‘… victims commonly choose a messiah who is also a victim.… True liberation of the oppressed necessitates that the liberator too be oppressed’ (24). This perspective in turn influences Orchard’s view of the process that led to the Fourth Gospel’s presentation of Jesus: whereas e.g. Brown thinks that the community is rejected and persecuted by non-Christian Jews like Jesus was, Orchard reverses the direction of influence: ‘The Johannine Christians have created as their representative a Jesus who like them is rejected, persecuted and not of this world’ (63). Orchard opens up the possibility of reading John as a two-level drama. In the process the picture of Jesus is viewed by Orchard exclusively as a creation of the community and there is no reflection on the relationship between this and the reality which Jesus actually faced. I have to admit to being dissatisfied with what seems a rather one-sided approach.

The major part of the study (chs. 5–10) goes through the whole of the Gospel, focusing on every aspect of the text that contributes to the presentation of Jesus as victim. The exegesis Orchard presents can on the one hand be welcomed in that it confronts the reader with numerous aspects of suffering Jesus had to endure throughout his ministry. Thus the study provides much evidence to balance those approaches to John’s presentation of Jesus that overemphasise the victorious Jesus as a divine figure. On the other hand, the exegesis is at times too obviously driven by the desire to find the motif of violence and Jesus as victim everywhere—this leads to some unconvincing exegetical decisions (e.g. the treatment of the footwashing episode in ch. 8).

The most challenging part of the thesis consists of Orchard’s perception of Jesus’ self-cognisance as a victim. Utilising insights from victimology as an offshoot of criminology, she looks for evidence that shows Jesus’ participation in his own victimisation, finding it for instance in Jesus’ offensive behaviour in his encounter with Nicodemus or in John 6, which is structured by Orchard along the lines of Jesus’ (mis-)behaviour: he challenges (6:26–34), alienates (6:35–42), angers (6:43–52), repulses (6:53–60) and repels his listeners (6:61–66). Although Orchard is careful not simplistically to blame Jesus for his own fate, the thrust of her argumentation suggests that she might be sympathetic to this view. This perception of Jesus as someone who was ‘asking for it’ (265), who ‘appears to collude with his oppressors’ (264) opens up a lot of difficult questions that deserve to be tackled seriously. Thus Orchard’s study might stimulate someone to pick up and address these issues. That would have to include theological assessments of some questions which Orchard’s postmodern approach excludes: is there a relationship between Jesus’ behaviour and his absolute truth claims? If so, does this relationship render his behaviour even more suspect, or is there any justification for it? What are the consequences for liberation theology? Is a picture of a Jesus who ‘asked for it’ and who not only endured but embraced violence, emphatically to be rejected as a model for those who are already oppressed? Should they stand up to their oppressors? If not, what are the alternatives? Orchard’s study is provocative. She puts pressing questions on the agenda of those who refuse to do NT exegesis without an interest in contemporary relevance.