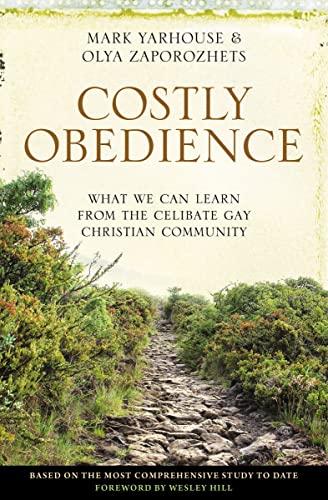 Costly Obedience: What We Can Learn from the Celibate Gay Christian Community

In Costly Obedience, psychologists Mark Yarhouse and Olya Zaporozhets present the most comprehensive study to date of the celibate gay Christian community—otherwise known as “Side B gay Christians” (p. 79). This community gained visibility in the Revoice and Spiritual Friendship conferences of 2018. Such believers confess a historic, biblical sexual ethic—confining sexual expression to a monogamous heterosexual marriage—but they neither “hold out the expectation of changing orientation or attraction, nor hold the belief that it is sin to experience same-sex attractions” (p. 28). Convinced that “same-sex sexual relationships are morally impermissible,” they either enter mixed-orientation marriages or remain celibate (pp. 79–80).

The authors clearly seek to support the celibate gay Christian community, declaring that “our hope in writing this book is that we might begin to see more constructive dialogue between fellow Christians of opposing viewpoints” (p. 223). While avoiding the current debates surrounding the utility and meaning of words such as “gay,” “identity,” and “attraction,” Yarhouse and Zaporozhets hope that this work will aid the inclusion of celibate gay Christians into the broader Christian community.

The authors also explore the current tensions between the church and the LGBTQ+ community. The first two chapters evaluate the relationship between the church, the LGBTQ+ community, and gay Christians. Yarhouse and Zaporozhets survey the various Christian “sides” of responses to same-sex attraction (Sides A, B, C, and X) and therapy movements such as Exodus International. This section analyzes different Christian approaches to understanding the nature of same-sex attraction. They note how negative interactions between Christians and the LGBTQ+ community have wounded the relationships between these two communities. Many Christians are unaware of historic injustices committed against the LGBTQ+ people, which were supported by some Christians in the past. For example, at the peak of the AIDS crisis, conservative Christians lobbied the Reagan administration against helping individuals who were dying of AIDS (p. 76). The effects of these events are still felt within the LGBTQ+ community today.

In chapters three and four, Yarhouse and Zaporozhets disclose the findings of their comprehensive empirical study of the celibate gay Christian community. They review charts, personal testimonies, and surveys drawn from the experiences of celibate gay Christians. They also investigate the beliefs of gay Christians concerning the permissibility, mutability, and causes of same-sex attraction, as well as their emotional well-being and various relationship attachment styles (especially anxiety and avoidance).

In chapter 4, the authors explore the stages of sexual identity development by tracking the various points at which same-sex attracted people reached significant milestones. These events include experiencing an awareness of same-sex attraction (294 participants), engaging in sexual behavior with the same sex—from kissing (117 participants) to orgasm (100 participants)—and publicly identifying as gay (128 participants; p. 117). It is important to note that the gay identity of those surveyed did not limit their sexual interactions with the opposite sex. The authors report that many were also sexually active with the opposite-sex during the development of their sexual identity (99 participants were fondled by opposite sex to orgasm; 70 participants engaged in sexual behavior with opposite sex; p. 129).

Nevertheless, while Yarhouse and Zaporozhets’s volume helps Christians understand the gay Christian community, its utility for future engagement is unclear. Empirical studies have natural limitations. While statistics and testimonies provide some level of evidence, all such research requires careful interpretation and application. Since the authors have stated their support of Revoice and the use of the term “gay” for a same-sex attracted Christian’s sexual identity, their study is far from neutral. They have clearly taken a “side.” Also, their reliance on psychological language and categories raises questions concerning the place, understanding, and authority of Scripture in these conversations.

Although this volume desires to study the experiences of the gay Christian community, it would benefit from a more thorough (and biblical) exploration of the nature of Christian identity. The label “Christian” is a theological label: it describes one who believes a certain set of truths (the gospel), within a certain community (the church), under submission to a certain authority (the Bible), having experienced certain spiritual events (conversion), and walking in a certain lifestyle (holiness). Because the authors rely upon participants’ self-identification and use empirical statistics of spiritual practices to determine Christian identity (pp. 87–88), it is not clear how “Christian” all of the participants are.

This concern is highlighted by the fact that a significant portion of the participants confess to having engaged in heterosexual and homosexual activity reaching orgasm outside of marriage. One wonders how the authors interpreted the fact that these participants claim to be Christians while engaging in sexual activity around the time of their sexual identity disclosure. This study would benefit from further investigation into the Christian background of these participants by analyzing their profession of faith, church membership, and evidences of conversion.

Many Christians are gaining more awareness of the need to think critically and carefully about the relationship between faith and homosexuality. Churches need to learn to minister compassionately and effectively to same-sex attracted Christians who are seeking to be faithful to Christ and Scripture in the expression of their sexuality. Yarhouse and Zaporozhets aid this process by revealing the current state of the celibate gay Christian community, and by encouraging us to pursue clarity and charity as we continue this conversation.