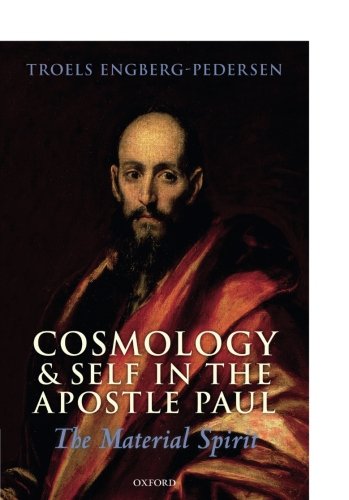 Cosmology and Self in the Apostle Paul: The Material Spirit

The central thesis of Troels Engberg-Pedersen’s book (a sequel to his Paul and the Stoics) is that many of the central concepts in Paul need to be read with a double perspective. In addition to the traditional metaphorical/cognitive readings, Engberg-Pedersen argues for a ‘non-metaphorical, concrete and basically physical’ reading, which he labels ‘cosmological’ (p. 1). Among other things, this involves understating pneumaas a physical entity in Paul’s letters. Chapter 1 argues that in 1 Cor 15, Paul understands ‘pneuma as a through and through material, bodily phenomenon’ (p. 3). Not only is Paul drawing from the widely accepted Stoic idea of corporeality but he also remains consistent with both the Hebrew Bible and ‘apocalyptic’ understandings of God. Engberg-Pedersen does point out, however, that a Platonist reading of pneuma in Paul is excluded. Chapter 2 applies this materialistic understanding of pneuma to the other (undisputed) Pauline letters in order to continue to build up a clearer view of Paul’s worldview. Chapter 3 seeks to show the further applicability of his approach to understanding Paul’s entire worldview. He concentrates on showing how the cognitive and physical explain both Paul’s anthropology and his understanding of different super-human entities (e.g., angels, demons, Satan). Chapter 4 reflects on the relationship of human beings to the ‘powers’ of the world (discussed in the previous chapter). Engberg-Pedersen employs Epictetus, whose analysis is not only ‘philosophically valid’ but also reflects Paul’s own handling of the issue. Paul and Stoicism both share the idea that divine agency enables human freedom. Chapter 5 begins the second half of the book and takes a different turn. Whereas the first four chapters seek to understand Paul’s worldview in its totality, the second half seeks to understand how those various features relate to themes that belong directly to the text itself. Engberg-Pedersen focuses on three themes: Paul’s account of his own conversion (including his reception of the pneuma); how he expects his own readers to ‘be structured both physically and mentally’ (p. 5); and how he brings about this change in his readers through his own letter-writing. Chapter 5 applies three (contested) modern philosophical concepts: ‘religious experience,’ ‘self,’ and ‘habitus.’ Finally, chapter 6 summaries the findings and brings them to their focus: ‘an elucidation of Paul’s bodily practice in the writing of his letters’ (p. 172).

This is a demanding book that assumes a fair bit of philosophical background. It is immensely stimulating and often provides very fresh readings of the Pauline text. So, when Phil 2:15 is read in the light of 1 Cor 15, Engberg-Pedersen argues that we are to understand that the latter text pictures those who are resurrected as no longer merely shining like stars but actually becoming stars (p. 43).

Volker Rabens’s book, however, challenges many of the central concerns of Engberg-Pedersen. (Rabens interacts with Engberg-Pedersen’s volume as well as his earlier articles.) Rabens’s study expands his PhD dissertation completed at London School of Theology. The central concern of the book is to determine Paul’s understanding of the role of the Spirit in the ethical life of the believer. In reviewing the last 140 years of scholarship in this question (extensively detailed in a fifty-page appendix), Rabens observes a spectrum. On one end, scholars stress the ‘pneumatological indicative’ whereby the Spirit actually drives the believer (e.g., Gunkel). The other end of the spectrum sees the Spirit making believers aware of their salvation by which they are enabled to realize the ethical imperative by their own power (e.g., Stadler). Within this spectrum, one major area of discussion has concerned the nature of the believer’s transformation accomplished by the Spirit. Recently (since Gunkel), the idea that the Spirit is a heavenly substance that transforms humans substantially(or ontologically) has dominated the discussion.

Part 1 examines that dominant view of transformation by the infusion of a material Spirit. Chapter 2 examines Paul’s context with respect to the idea of a physical concept of the Spirit and ethical change by infusion-transformation. Rabens surveys Graeco-Roman and Jewish literature. He concludes that while the Stoics did have a material concept of pneuma, this concept did not play a major role (if any) in their ethics. In discussing Jewish literature, Rabens concludes that apart from perhaps one strand in Philo (where pneuma is referred to as an σώματος οὐσία) there is evidence neither for any interest in the materiality/immateriality of the Spirit in Judaism nor for an infusion-transformation ethic. Chapter 3 turns to consider Paul’s own letters. The bulk of this chapter treats the ‘spiritual body’ of 1 Cor 15:44 and the possible infusion of the material Spirit through the sacraments (1 Cor 12:13; 6:11; 10:3–4). On the basis of extensive exegesis of 1 Cor 15:44, Rabens argues that the idea of a physical pneuma is not found here. However, Rabens is more cautious regarding the possibility of Paul having an ‘infusion-transformation’ concept of ethical enabling. He argues that Paul is ambiguous regarding the actual method of reception of the Spirit—i.e., the image of being made to drink of the Spirit (1 Cor 12:13) may have evoked an association with Stoic pneumatology in Paul’s audience. However, not only does the philosophic language of Stoicism fundamentally differ from Paul, it remains to be proven that Stoic pneumatology was understood by all the members of Paul’s churches (and not just the elite). As such, Rabens argues, it seems wiser to attempt to develop a model of the work of the Spirit in Paul’s ethics that is based on the actual effects that are attributed to the Spirit in Paul (and in Judaism).

Part 2 thus considers a new approach, namely ethical empowerment by the relational work of the Spirit. Rabens’s basic argument in this section is that ‘it is primarily through deeper knowledge of, and an intimate relationship with, God, Jesus Christ and with the community of faith that people are transformed and empowered by the Spirit for religious-ethical life’ (p. 123). Chapter 4 provides a prolegomena, including a definition of terms (e.g., ‘relationship,’ ‘empowerment’) and a general discussion of his relational model, particularly its dynamic nature in contrast to the static ‘infusion-transformation’ model. In the context of discussing his relational model, Rabens addresses the question of the personhood of the Spirit. He suggests that Paul at most appears to understand the Spirit having ‘personal traits’ rather than explicitly as a person (p. 145). He argues that it is methodologically unwise to argue for a particular ontology of the Spirit. Rather it is more fruitful to examine the effects of the Spirit. In the final two chapters, Rabens examines these effects in Hellenism, Judaism, and Paul. Chapter 5 seeks to show that there is adequate material in Paul’s religious and philosophical context against which his relational model of the ethically empowering work of the Spirit can be read (p. 146). Rabens does not extensively examine every aspect of ethical empowering in Graeco-Roman and early Jewish literature. Rather, he seeks to uncover traces of the idea of the Spirit empowering people for ethical living by ‘facilitating deeper knowledge of God and an intimate relationship with him and with the community of faith’ (p. 146). Chapter 6, the most extensive in the book, argues that the Spirit ‘continually transforms and empowers believers for ethical conduct by enlivening and even intensifying [their] intimate relationships’ with God, Christ, and the Christian community (p. 186). He deals first with how the Spirit transforms via deeper knowledge of God and Christ (2 Cor 3:18) and then with the idea that the Spirit’s work of adopting into God’s family is a transforming and empowering experience (mainly Rom 8:12–17).

Chapter 7 summarises his findings: though certain strands of Hellenism subscribe to a view of a material pneuma, this is not present in the Hebrew Bible, early Judaism, or Paul; nor do these sources operate with an idea of ethical empowerment or transformation through the infusion of a material Spirit. In contrast, Rabens argues that Paul operates with a relational understanding of the ethical work of the Spirit. In terms of Pauline pneumatology more generally, Rabens argues that Paul is relatively unconcerned with ontological questions concerning the Spirit (p. 249). He agrees with Engberg-Pederson that Paul’s pneumatology cannot simply be reduced to either ‘Hellenistic-materialistic’ or ‘Jewish-immaterialistic’. However, he argues that it is also a false dichotomy to reduce Paul’s understanding of pneuma to either a Stoic or a Platonic one as Engberg-Pederson does. Rather, Paul may have been uninterested in the philosophical agendas of these schools and in the ontology of the Spirit. The closest he comes, argues Rabens, is in his discussion of the resurrection body in 1 Cor 15:35–54, but here the focus is on the nature of the resurrection body, not the Spirit. As such, this text cannot be made the starting point for understanding Paul’s pneumatology (pace Engberg-Pederson, who argues that how we understand the σῶμα πνευματικόν has ‘huge consequences for everything else we should say about Paul’ [p. 14]).

Both of these works seriously treat aspects of Pauline pneumatology and ethics and the interaction between the two. In summary, Engberg-Pedersen argues that Paul is operating with a physical concept of the Spirit and an essentially physical ethical transformation. In contrast, Rabens argues that Paul operates with neither a material view of the Spirit nor a materialist view of ethical transformation. Rather, he sees the Spirit working relationally. On balance, Rabens is more convincing since he more thoroughly compares Stoic and Pauline thought and highlights the obvious differences that Engberg-Pedersen disregards. Rabens’s book is a model of thorough research, lucid argument, and careful exegesis. Engberg-Pedersen’s volume is also carefully argued, intensely stimulating, and an important study, but, ultimately, on a number of key points it remains unconvincing.