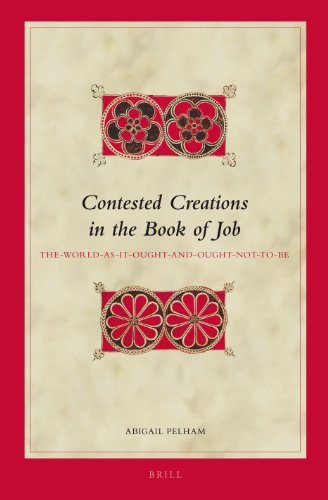 Contested Creations in the Book of Job

“[T]he book that follows both is and is not a blank page” (p. 1). With this assertion the author, an adjunct lecturer at Luther Seminary in St. Paul, introduces a work written with wit and verve in a resoundingly postmodern key. The book, of course, includes no blank pages, but very effectively raises questions about how texts are read, used, and perhaps effaced.

The introductory chapter situates the study methodologically and theoretically. While admitting that meaning is located in the text (p. 8), Pelham argues that reading involves more than finding meaning. Not only does the text’s meaning exceed the author’s meaning (p. 12), but Pelham urges that readers could (and ultimately should) use a text rather than simply reading it. She wants to be as free an agent in the reader-author dialogue as is the author. Thus speaking of the reading process, Pelham asserts that “the scholar writes her own text” (p. 15). Further, Pelham favors a multiplicity of meanings rather than a fixed one for theoretical as well as pragmatic reasons: “a Bible that can mean anything has the potential to mean everything. It is in the generation and exploration of new ideas that progress is made, not merely in the explanation of the text” (p. 16).

It seems that a significant portion of Pelham’s theory of reading is derived from her experience of reading Job. As her opening words show, she has written, effaced, and re-written a number of attempts to interpret/use the book of Job. The precise location of hermeneutical indeterminacy remains vague, however: her own experience shows it to be true (for her), and she infers from the variety of interpretations of Job that “their sheer volume points to their arbitrariness” (p. 21).

These thoughts lead Pelham to treat the Book of Job as a space in which to think, and she does so using the categories of relationships (Chapter Two), time (Chapter Three), and space (Chapter Four). A final chapter examines the epilogue of Job, and a short epilogue closes the work. Pelham uses a binary world-as-it-ought-and-ought-not-to-be polarity to grasp the various perspectives in the Book of Job. While there are many helpful insights sprinkled through these chapters, this binary optic nearly obscures the message of the book. On the one hand, the human characters use this optic to view the binary classes of wicked and righteous: “The righteous are those who live in the world-as-it-ought-to-be and who benefit from the blessings intrinsic in it. . . . [But] although wicked people may be technically present in the world-as-it-ought-to-be, they do not really live there. Instead, the wicked live in a kind of anti-world—the world-as-it-ought-not-to-be—which, nevertheless, is where they belong” (p. 43). The prose is rather thick, but the point seems to be that the ideal world (“ought”) is free of either wicked persons or of the non-blessing which they typically receive.

On the other hand, God does not recognize this bifurcation: “For God, there is only the world, which is his world, and this is the world he describes to Job in chapters 38–41” (p. 73). Quite right—but in the following chapter Pelham tries to undo this affirmation. Her argument against it is based in large part on the possibility that God does not control Leviathan, behind which runs the idea that if some agents in the universe have volitional capacity, then God cannot be in ultimate control (pp. 123, 237). “If the life of . . . Leviathan. . . is not in [God’s] hand, perhaps the life of every human being is not under God’s thumb. . . . If this is the case, God is not the agent of change in the world, Job included. God’s creation, then, is a world over which he has relinquished control, over which he is not king. . . .” (p. 137).

Pelham finds equally strong reasons in the epilogue to deny to the book a fixed overall message. In her opinion, the epilogue refutes God’s assertion that his world, with all its moral complexity, is the only one (p. 188) because “Although God tells Job that the world works in one way, for Job, in the epilogue, it turns out to work in a completely different way” (p. 236). That is, Job’s restoration is the contrary of the world that God presented in Job 38–41 because in Job’s restoration we see “the righteous man . . . reaping reward for his righteousness” (p. 237).

At this point critique seems unavoidable. Does not this interpretation of the epilogue overlook the fact that God is the sole agent (i.e., verbal subject) in Job’s restoration (42:10)? And while God’s speeches do include the thought that “the righteous are not rewarded as a matter of course” (p. 237), does not the qualification “as a matter of course” prevent us from seeing God (cf. the first critique) as the creator of a world other than the one God described? Conclusions like these seem to be part of a larger pattern in which Pelham misunderstands some key aspects of the book, or at least pays no heed to genuine ambiguity. Some examples: “God knows he ought not to have caused Job to suffer for no reason” (p. 54), a statement which need not, many commentators have argued, imply God’s guilt; God might “not abase the proud and tread down the wicked” and his power instead “sets free” (p. 91), overlooking the progressive nature of the realization of God’s righteousness (cf. N. Habel’s treatment of 38:12–14 [Job, John Knox, 1985], p. 540); Leviathan is not subject to God’s control (p. 137), a conclusion that seems impossible to sustain in light of the nature of the rhetorical interrogation to which God subjects Job, in which the answer is always something like “I can’t, only you can;” and so on.

One might suggest that Pelham’s interpretation of Job is simply one more disharmonious voice in the crowd of Joban interpreters, and therefore is arbitrary and bears no further examination (cf. p. 21). But this approach to reading is immoral and nihilistic, since it un-creates the author’s text by ignoring it. Instead, I want to take Pelham’s words seriously in recognition of the value of verbal communication.

It seems that Pelham has created more ambiguity in her reading of Job than exists in Job, and that in a number of cases she does so without exploring contrary interpretations. The short bibliography, which contains only one non-English work, is evidence of a selectivity that is difficulty to justify: not only recent works like T. Krüger et al. (eds.) Das Buch Hiob und seine Interpretationen: Beiträge zum Hiob-Symposium auf dem Monta Verità vom 14.-19. August 2005 (Zurich: Theologischer Verlag, 2007) but nearly the entire sea of Joban literature that has accumulated over the past two millennia play no constructive role in Pelham’s study. She has clearly generated new ideas in her study of the text, but their distance from the textually-based, linguistically-grounded interpretations offered by generations of scholars makes it difficult to judge much of the work to be substantial or convincing.

In her opening discussion of theory, Pelham suggests that biblical texts in dialogue with other biblical texts, but also with the reader, “can be made to say things that, on their own, they would not say” (p. 17). Pelham offers a number of “conclusive” statements (something she forbids to Job’s author, p. 40), but despite posing some helpful questions for less-authoritative interpreters, it seems clear that she has written not about Job, but about a book of her own creation.