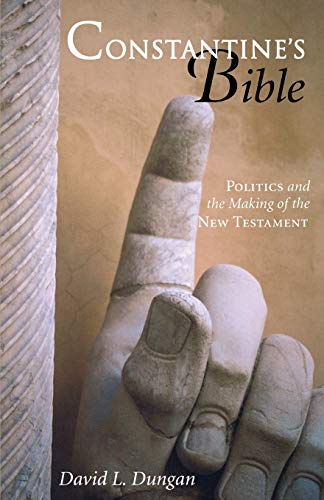 CONSTANTINE’S BIBLE: POLITICS AND THE MAKING OF THE NEW TESTAMENT

David L. Dungan is Professor of Religion at the University of Tennessee (Knoxville), and this book is the culmination of a course that he has been teaching for thirty-five years entitled, “The Making of the New Testament.” His vast knowledge of, and years of reflecting on, early Christianity shines through on every page of this thought-provoking little book.

Dungan’s basic argument is laid out in the opening chapter and reiterated throughout the book: “I will demonstrate that the legal imposition of a kanōn … upon Christian scripture along with a kanōn of the correct summary of doctrine (the creed), and the enforcement of both with the full power of the Roman government, was a phenomenon unique to fourth- and fifth-century Christianity” (8). His focus, therefore, as reflected in the subtitle of the work, is on the political atmosphere in which the canon of the New Testament was formed and affirmed. The scripture as a canon that Christians today possess is very different from the way scripture functions in other religions. The canonization of scripture reflects the political and philosophical ideology of the early Christian church as it was shaped in the wake of Constantine’s conversion in the early fourth-Century. The book is very engaging and provocative. Moreover, it is written in an accessible style, allowing it to be read by a wide range of students interested in the formation of the New Testament canon.

The book is short, only 139 pages of actual text (notes not included) over six chapters and an epilogue. The first chapter (“What a ‘Canon’ of Scripture Is—and Is Not”) clarifies how we should distinguish between the terms “scripture” (“a slowly evolving conglomeration of sacred texts,” 2) and “canon” (the imposition of strict boundaries around certain scriptures, 3). A canonization of scripture (as in Judaism and Christianity) is a relatively rare phenomenon in the history of religion.

Chapters two (“The Greek Polis and the Demand for Accuracy”) and three (“Greek Polis Ideology within Second Temple Judaism and Christianity”) give an astute historical background to the formation of the New Testament canon. Dungan illustrates how the term kanōn was originally used in the political arena prior to and contemporaneous with early Judaism and Christianity. It was not until the fourth century when the term kanōn would be used of Christian scripture, though the term was in use before then to refer to the “canon of truth,” the “canon of holy tradition,” etc. (29).

Chapter four discusses “The Influence of Greek Philosophy upon Early Christianity,” providing a good overview of events and movements (second- and third-century) leading up the canonization of the New Testament in the fourth-century. Dungan shows that the interest in authentic versus spurious writings reflects the concerns of Greek philosophy and not that of early Judaism.

Chapter five (“Against Pagans and Heretics: Eusebius’s Strategy in Defense of the Catholic Scriptures”) is fundamental to the book. Dungan examines in great detail Eusebius’s discussions in his Ecclesiastical History on the criteria used to select which books were to be considered the church’s scripture (which in turn led to the canonization of this scripture). The chapter reads almost as a brief commentary on Eusebius’s statements in this regard, unpacking key terms and clarifying misunderstood phrases. Eusebius gave us a “minimalist collection of scriptures” where “all regional agendas have been intentionally ignored; all personal preferences of prominent theologians and bishops set aside; every possible evidence of pressure politics and manipulation of the process rigorously suppressed” (92). No official canon was declared, yet the foundation was laid.

Chapter six (“An Emperor Intervenes: Constantine Reshapes Catholic Christianity and Its Scriptures”) comprises a well-written and exciting account of Constantine’s conversion and the subsequent effects it had on Christianity and the formation of the New Testament canon (this was my favorite chapter!). The influence that Constantine had on Christianity cannot be underestimated—and this is well known. But Dungan shows that this influence trickled down to the formation of the canon: “When the Roman government, in the person of the emperor, powerfully intruded into the church’s activities, it irrevocably skewed the whole debate by transplanting it into the state’s legal framework, where coercive enforcement of the outcome was routine … what nonorthodox Christian would dare publicly to use a non-accepted writing or attack the orthodox collection and propose an alternative selection of scripture” (120–21). Dungan concludes with an Epilogue, which examines how the canon was looked upon by various individuals from the late fourth-century to the Reformation.

The book is highly engaging and well worth the short time it will take to read. Dungan’s wealth of knowledge and critical evaluation of early Christianity and politics is admirable. A personal charge is added to the Epilogue, which gives a bit more insight into where Dungan is coming from. Upon reflecting on the formation of the atmosphere surrounding the formation of the canon, Dungan writes: “I would propose this correction to our modern rejection of the scriptural canon: freedom from having a canon, i.e., from restriction to a specific set of writings compelled by the use of force, need not and should not extend to jettisoning, at the same time, the valuable results of the original orthodox Christian scripture selection process as described by Eusebius in his Ecclesiastical History” (138–39).