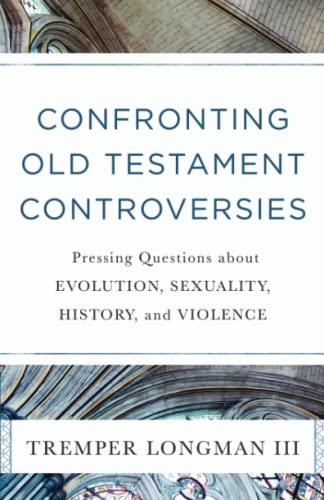 The subtitle of this work is enough to catch one’s attention: Pressing Questions about Evolution, Sexuality, History, and Violence. Tremper Longman III thoroughly addresses each question from his vast experience in the classroom and the church. He writes in a conversational style, complete with occasional anecdotes (e.g., pp. 204–5) related to various seasons of his life. Longman graciously engages the leading scholars of each question by finding common ground where possible, expressing appreciation for their contribution, fairly representing their position, and then clearly articulating his viewpoint.

The outline of the book is straightforward: a chapter per question. Longman includes one to three excursuses with each question to address related texts or topics more specifically. Three out of the four chapters incorporate hermeneutical insights that provide the “cognitive environment” related to the issues (p. 16). Longman attributes this phrase to John Walton (Lost World of the Flood [Downers Grove, IL: IVP Academic, 2018], 6–10). Longman repeatedly affirms his commitment to the authority and inerrancy of the Scripture (p. 11).

For those familiar with the works of Longman, there are no surprises regarding his conclusions. He wrote this manuscript to bring relief to Christians who struggle with the teaching of the Old Testament and the four topics (p. xi). The book’s value is the compilation of topics in one volume, presented in a user-friendly manner by a seasoned scholar.

In chapter 1, Longman approaches the question of evolution and creation as an evolutionary creationist. He rejects evolutionism and advocates a divine providence-guided means of evolution (p. 60). A plain and reasonably argued pathway guides the reader through all the details. The foundational layer identifies the genre of Genesis 1–3 and, more accurately, Genesis 1–11 as theological history of actual events recounted with figurative language (pp. 26–28, 77). He carefully locates the presence and function of this language in its cognitive environment (pp. 16, 49, 150).

The tensions associated with Longman’s presentation of evolutionary creationism revolve around the discussion of Adam, sin, and death. Based on the “overwhelming” evidence of evolution, Longman argues that Adam and Eve are literary representatives of the first humans who had the status of God’s image and likeness (p. 69). Longman does believe in a historical reality behind these literary figures and the historicity behind the original act of disobedience. He argues that analogies between the literary Adam and the historical Christ do not subdue the theology of sin and death. He then contends that Augustine’s mistranslation of Romans 5:12 does not demand an inheritance model of sin that would necessitate a connection with Adam. Instead, the books of science and faith allow for an imitation model of sin. According to Longman, science offers us a better reading of Romans 5:12 (p. 72).

Longman’s presentation in chapter 1 has much to offer Christians troubled by the questions of evolution. The chapter could, however, be improved in a few ways. First, more methodological guidance regarding an interpretation based on science and the Bible. If one does not trump the other, does one lead the other? The exposition of Romans 5:12 and the discussion about the origin of humans are illustrative of this lack of precedence. Second, the interpretation of Romans 5:12 needs more contextual discussion than choosing how to translate a phrase to disqualify the inheritance model of sin. Finally, since many readers will not share Longman’s optimism about the evidence for evolution, perhaps more specific documentation for his view would be useful (pp. 58–59, 73, 76).

The question of history dominates the second chapter. More specifically, “Did the Exodus and Conquest Happen, and Does it Matter?” Longman addressed this issue in his 1994 Introduction to the Old Testament (co-authored with Raymond Dillard). In this 2019 Controversies publication, his pressing concern is to write for a Christian audience wrestling with the historical reliability of the Bible’s recorded events. His approach involves defining the controversy, addressing genre and history, and explicitly addressing matters related to the exodus and conquest (pp. 80–82).

Longman engages the publications of Kenton Sparks, Peter Enns, Megan Bishop Moore, and Brad Kelle (pp. 83–89). These four scholars express some degree of doubt about the historicity of the exodus and conquest. Despite their shades of doubt, Longman rightfully acknowledges their full embrace of the theological message associated with these historical events (p. 102).

Longman approaches the question of genre and history with two concerns (pp. 90–91). First, to correct mistaken evangelical views regarding inerrancy and apologetics tend to overhistoricize the Bible. If a biblical text or a canonical book does not intend to communicate a historical story, it is a mistake to historicize it. Consider, for example, the intention of Job and Christ’s use of parables. Second, to explain how genres grounded in history portray the past needs understanding.

The core concepts of chapter 3 are a summary of Longman’s 1995 publication, God is a Warrior (co-authored with Daniel G. Reid). The chapter is, however, fresh and current (pp. 172–76). Longman devotes considerable attention to recent scholarly endeavors to silence and snuff out divine violence from the biblical text (pp. 144–72). The attempts include reconsidering the nature of the Bible, the nature of God, and the nature of sin and sinners (pp. 146–54). In addition, he addresses attempts to deny or uniquely interpret historical accounts of divine violence (cf. pp. 155–68).

Longman ends chapter 3 with two thoughts that remind us of our humanity and finiteness in the interpretative process (pp. 203–5). First, many divine violence questions leave us uneasy and without answers. He cites God’s dealings with the family of Achan and Job as examples. Second, the Divine Warrior theme raises questions concerning hell and eternal punishment. Longman responds with a personal testimony of how the divine judgment message worked to bring about his relationship with the Lord.

The final chapter tackles the delicate topic of sexuality and the Bible’s teaching on homosexuality. Although Longman indicates concern about writing on this topic, he demonstrates confidence in the Bible’s clear teaching and the church’s broad-based agreement on sexuality (pp. 207–8). He courageously writes with a desire to help the church understand difficult biblical texts (p. 210). Longman’s methodology is consistent with his approaches to the other controversies. He makes a valuable contribution to the topic of sexuality with his investigation of Sodom and Gomorrah (Gen 18:16–19:26), the behavior of the Levite with his concubine (Judg 19), and the relationship of David with Jonathan (2 Sam 1:26).

Overall, Confronting Old Testament Controversies helps Christians accomplish two objectives. First, it offers believers an interpretative model of how to read Scripture, especially the problematic portions. Second, it provides reasonable answers to the delicate and challenging questions within the framework of a biblical worldview. One may not agree with the conclusions of every chapter, but the book is a model of engaged biblical scholarship for the good of the church.