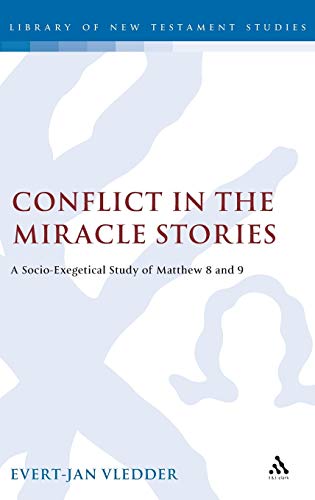 Conflict in the Miracle Stories. A Socio-Exegetical Study of Matthew 8 and 9, JSNTSup 152

This work is revised version of a dissertation accepted by the University of Pretoria in 1994. The author intends to investigate the conflict between Jesus and the Jewish leaders in Matthew 8 and 9 and its relevance for the whole Gospel. The book contains five chapters.

Chapter 1 deals with inadequate explanations of conflict in the miracle stories. Three different types of scholarly interpretation are distinguished. The first group stresses the christological function of the miracle cycle, the second the ecclesiological and the third takes up the aspect of conflict. Vledder criticises former interpretations of the Matthean miracle cycle for their insufficient understanding of conflict and develops his own model, adapting conflict theory and socio-exegetical methods for his own purpose.

In chapter 2 Vledder attempts to synthesise the conflict theories according to R. Dahrendorf and R.A. Coser because of their emphasis on the dynamic structures of society and the permanent presence of conflict (60–63). The author asks for the definition, the causes, the units and the functions of conflict. Vledder defines conflict as the ‘permanent presence of antagonism …, opposition and incompatibility between two or more persons or groups’ (67). Actually, only two groups are involved in one particular conflict.

Causes for conflict are incompatible interests between classes because of issues like survival, the pursuit of own interests, inequality, scarcity of resources, control over resources, power and distribution of power, authority, privilege, status and prestige. The struggle for power and authority are the most important factors in social conflict. Classes are qualified especially by authoritative relations and have contradicting interests with other classes.

Vledder modifies the model originally developed for industrial societies by using G. Lenski’s stratification model of so-called ‘advanced agrarian societies’. The rulers, the governing class and the retainer class constitute the upper classes, the merchant, peasant, artisan, unclean or degraded and the expendable the lower classes.

The function of conflict is to establish and maintain the identity of groups and their boundaries against the surrounding world (103). Conflict can go through different stages with increasing intensity. Because the solution of one conflict can introduce another, Vledder speaks of an ‘ever-ongoing spiral’ of conflict.

Chapter 4 is the exegetical part of Vledder’s work. He begins his observations with Matthew 7:29, where the crowd as the audience of the Sermon on the Mount accepts Jesus’ authority and not that of the scribes. There is an ‘assumed’ conflict between Jesus and the leaders, although they do not appear before 9:3. The crowd is the ‘potential follower’ of Jesus as well as the Jewish leaders. The healing of ritually unclean and their reintegration into society intensify the tensions with the leaders. Jesus breaks through the traditional rules and values acting mercifully on behalf of the marginalised. Vledder shows other lines of conflict In Matthew 8 and 9: with scribes regarding discipleship and forgiveness of sins, with Pharisees regarding uncleanness. But the acts of the Matthean Jesus are the touchstone for the relation with the leaders, because the Pharisees regard ‘mercy’ as their own ‘core value’. They are the dominant group within Judaism and the counterpart of Matthew’s community after 70 CE trying to replace the lost institution of the temple. Vledder’s fundamental assumption is that the narrative of Matthew, though telling a story about Jesus’ life, is transparent to the situation of Matthew’s community.

Vledder’s book is very helpful to think once more about the underlying conflicts of Matthew’s Gospel. His discussion of conflict theory and his summary about the social location of Matthew’s Gospel are stimulating. However, there are deficiencies as regards form and content. Although the book is structured in sections and subsections, the headings are not numbered. The abundance of different material and the arrangement of arguments are sometimes confusing and make the reading process difficult. There remains doubt about the prominence of social conflict in both chapters of Matthew. The concluding remark of the Pharisees in Matthew 9:34 that Jesus acted as an agent of evil may serve as one example. One wishes a more intense application of conflict theory to exegetical work.