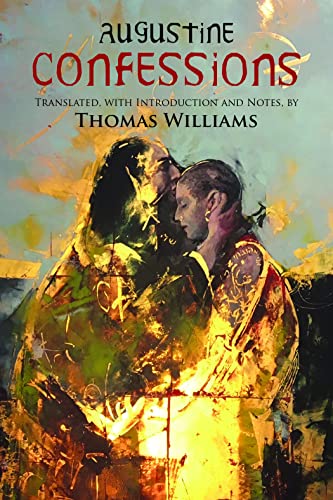 Confessions is considered to be one of the great works by Augustine of Hippo (354–430). While Augustine wrote many more influential treatises, sermons, and even letters, it is Confessions that is most associated with the North African theologian. It is one of his most studied works and continues to captivate readers of all stripes and dispositions. This newest translation of Confessions by Thomas Williams is a masterful work that beautifully captures Augustine’s thought and heart. Williams seeks to convey the philosophical nuance of Augustine’s thought, but in doing so, provides a translation that can be confidently used by students of any field, including the casual reader. Augustine’s autobiography is unique in that it reveals more about him than any other figure from antiquity that we possess. His story, however, is not the common biography akin to biographies found on display in airport bookstores. It is not an exclusive “tell-all” that provides every juicy detail of a wayward son turned saint. Confessions is, first and foremost, a prayer, a conversation between creature and Creator, wherein the author intentionally weaves the fabric of grace into the tapestry of his early life. In his journey to explore the deep recesses of the soul, Augustine set the course for much of Western theological and philosophical thought. Not bad for an extended life-story wrapped in the language of devotion and prayer!

Williams provides a helpful introduction to the life and thought of Augustine as it arises within the Confessions. This section is a welcomed discussion on intertextuality and a note on the essential passages of Scripture woven throughout the text. As Williams conveys, his translation speaks to the philosophical notions of Augustine, yet with the desire “to be as musical as possible” (p. xxx). Williams’s introductory remarks, however, remain brief as the goal of the text is to immerse readers in the Confessions. The text, likely composed around 395, may have been a defense against Donatist detractors who claimed that Augustine remained tied to his Manichean roots. Still, it is more likely that it was an exposition on the role of divine grace using himself as the subject. It possible that the text served multiple purposes in the mind of Augustine. Whatever the rationale, the mysterious and glorious working of God’s grace in the life of Augustine remains a consistent theme. It is the story of a soul coming alive to the truth and beauty of God and finding its true rest and satisfaction in knowing God, and God knowing him.

Williams’s translation does not diminish the value of other modern translations. Evaluating a new translation of a pivotal text such as Confessions should shed light on the previous offerings. The multivolume work of James J. O’Donnell (Oxford: Oxford University Press, 1992) is matchless in many ways, both in helping understand the background and context of Confessions but also in providing guideposts for subsequent translations. The translation by Maria Boulding (Hyde Park, NY: New City Press, 1997) is great for new readers of Confessions. While the translation from F. J. Sheed (Indianapolis: Hackett, 2006 [2nd ed.]) retains its value, Williams brings modern language to bear on the text. The “Thou shalts” of previous translations are smoothed away and replaced with modern vernacular. That said, some renderings, especially in translating the biblical references, are a bit too loose. This is a similar situation to Garry Wills’s translation (New York: Penguin, 2008), which renders Augustine and the Scriptures with an acute eye to prose. R. S. Pine-Coffin (New York: Penguin, 1961) and Henry Chadwick (Oxford: Oxford University Press, 1991) retain value for a much more straight-forward translation, but Williams combines a straight-forward approach with some more modern nuance in a readable form. Last, a 2014 addition to the Loeb Classical Library with a fresh translation of Confessions by Carolyn J. B. Hammond provides a useful diglot containing the Latin text. Hammond’s translation renders a readable text that is smooth while also closely maintaining adherence to the Latin original. With these considerations, Williams gives readers a good mix of prose, modern language, and attention to the contours of Augustine’s thought. The abundance of good translations of Confessions shouldn’t confuse the reader, but rather confirm to the reader the importance of this essential text of Christian spirituality and theology.

What comes alive in this translation is not only solid English prose but the voice of the theologian who found his rest in God. Although this translation is geared more towards a philosophical understanding of Augustine, it captures the thought and life that has continued to impact Christian theology and spirituality for generations. It is a worthy translation for any use, be it in a classroom or personal reading. It will become my go-to translation for the Confessions for years to come. This does not negate the value of other excellent translations put forward in recent history, notably Chadwick (Oxford), Boulding (New City Press), or Hammond (Harvard University Press), among others. Williams does well to capture the thought of Augustine, knowing that it is multi-faceted. I am thankful for this new translation and commend it to both seasoned and amateur readers of Augustine.