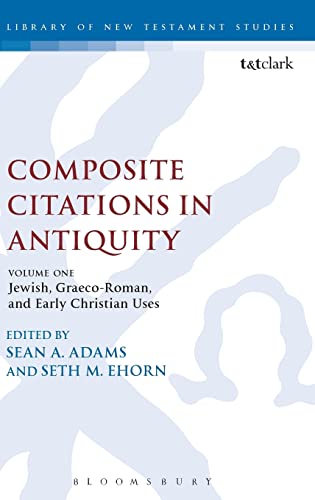 This volume is the first of two collections of essays dedicated to exploring the literary phenomenon of composite citations in writings from antiquity. Composite citations are defined as a clearly marked citation “when literary borrowing occurs in a manner that includes two or more passages (from same or different authors) fused together and conveyed as though they were only one” (p. 4). As noted by the editors, Sean Adams and Seth Ehorn, there are very few studies in composite citations and limited in detail, lacking in clarity of definition, and assumed to be either the result of faulty memory or deriving from a testimonia source (pp. 7–8). This book is a welcome scholarly contribution to the study of composite citations, which not only challenges earlier presuppositions but also investigates methodology, form, and function of composite citations across a wide spectrum of literature from antiquity.

The scope of this first volume includes works from 350 BCE to 150 CE written by authors across Graeco-Roman, Jewish, and early Christian backgrounds (excluding the authors of the New Testament). This provides a social and religious dynamic to the overall inquiry where previous studies have been exclusively textually based. It has previously been assumed that composite citations were a Jewish or early Christian practice; however, chapters written by Adams, Ehorn, and Margret Williams on the use of Homer, citations in Plutarch, and letters of Cicero, Seneca, and Pliny respectively, demonstrate that composite citations also occurred in Graeco-Roman writings, although less frequently than in their Jewish counterparts. Furthermore, these chapters demonstrate that composite citations are “intentional literary constructions” (p. 33). They exhibit functions of thematically and linguistically condensing large portions of text, uniting multiple texts into a single referent, and omitting, adding, and replacing words within a citation for literary effect. Adams investigates how Graeco-Roman writers were educated in the practice of formulating and reading composite citations. Although the evidence that composite citations were taught in schools is inconclusive, Adams is persuaded that students would have encountered composite citation practices as they advanced in their scholarly education (p. 34). Similarly, Williams highlights that it was only elite males who practiced composite citations in Roman epistolary writings and attributes the use of such complex techniques to the author’s need to feel superior and clever (p. 58). It was deemed inappropriate for women or commoners to receive “citation-enriched discourse” as it was not expected they would understand (ibid.).

The question of whether an audience would have recognised the texts fused into a composite citation is also relevant to Jewish texts. Johnathan Norton, in his chapter on “Composite Quotations in the Damascus Document,” proposes that composite citations should be placed closer to what is commonly called “allusion” (p. 92). An introduction to a citation is not usually indicative of its source; nor does it mean that the citation has borrowed from elsewhere. Therefore, it requires an audience to identify those texts and contexts. Norton demonstrates that this task is not straightforward and that even modern scholars have misidentified citation sources and compositions (pp. 98–99). In the case of the Damascus Document, Norton envisages that it was written by scribes for scribes and that the composite citations would have been appreciated (p. 118). Garrick Allen, in his chapter on pseudepigraphical literature, argues that readers in antiquity may not have cared to engage with the original contexts of the various components of the composite citation to “reverse-engineer” them (p. 155). Allen notes that this is a modern conception and that ancient readers view Scripture as “polysemic divine utterances that can and ought to be reformulated and reworked” (ibid.).

There are two chapters that investigate composite citations in early Christianity. The first, by Philippe Bobichon, focuses on citations in the works of Justin Martyr. Composite citations appear much more frequently in early Christian literature compared to Graeco-Roman and Jewish writings. Some interesting features occur in Justin Martyr’s citations, such as his use of New Testament text forms amalgamated with the Old Testament text form (pp. 175–76). Bobichon writes, “In many cases, Justin’s scriptural citations are composite only in terms of their deviances from textual traditions of the Old and New Testaments” (p. 181). Bobichon also notes that Justin used “second hand” citations (for example, from a Christian testimonia collection). Martin Albl’s chapter exclusively deals with the testimonia hypothesis and composite citations in early Christian literature. Albl assess earlier testimonia hypotheses and criteria in the works of C. H. Dodd and J. Rendel Harris, before presenting a test case from the Epistle of Barnabas. Albl then identifies a common core of quotations in Clement and Irenaeus, which indicates a common source, and argues (1) that this source was in written form and (2) that the context of the compilation of citations was polemic and apologetic (pp. 200–1). Early Christian writings also exhibited variations in the way that common quotations were combined, indicating that a testimonia source is not the exclusive reason for a composite citation, but rather that the writers had exercised discretion in combining texts to suit their discourse. Albl provides a list of criteria that will equip scholars to distinguish inherited sources from authorial construction in future research.

This volume concludes with Christopher Stanley’s chapter, “Composite Citations: Retrospect and Prospects.” Stanley summarizes some of the common features highlighted throughout the book with the view to provide a framework of questions for the second volume on composite citations in the New Testament. These questions explore the frequency, types, origins, sources, formations, adaptations, purposes, and audiences of the citations. Stanley also highlights two distinct modes of engagement composite citations have with their source(s); combined (where two or more texts are joined back to back within a single citation) and conflated (the insertion of a word or phrase from a subsidiary text in to a citation of a primary text), and challenges future scholarship to inquire whether the difference in construction indicates differing rhetorical purposes (pp. 204–5). The observations and questions proposed by Stanley will aid further scholarship in composite citations.

This first volume is a valuable resource for students and scholars engaging with citation practices from antiquity, and for future research in how ancient readers interpreted and valued inherited texts. Adams and Ehorn have amassed a rigorously structured and unified collection of essays that have revigorated a frequently neglected field of study, offering inspiration to both classical and New Testament scholars.