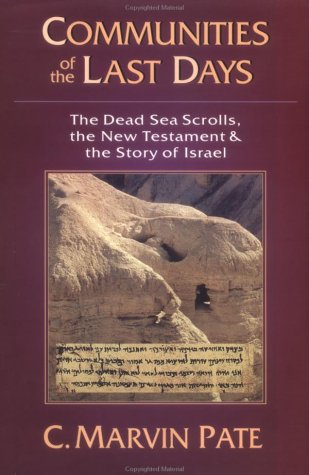 COMMUNITIES OF THE LAST DAYS, THE DEAD SEA SCROLLS, THE NEW TESTAMENT AND THE STORY OF ISRAEL

In Communities of the Last Days, Marvin Pate explores the thesis that the Dead Sea Scrolls and the NT share many features because both were produced by communities which were essentially apocalyptic. Conversely, crucial differences in their apocalyptic viewpoints, notably their eschatology, serve to explain the differences between the two bodies of material. In arguing his case, Pate begins by outlining the history of the Dead Sea Scrolls (DSS) and the Qumran group, discussing the various proposals for the relationship between the DSS and Qumran and the controversies over who the Qumran group actually were. He then explores the similarities and differences between the two bodies of material, allowing the NT to function as the frame of reference. This is helpful: rather than simply tracing parallels randomly, he works through the Matthean corpus, then the Lukan corpus, etc. As he does so, he examines areas such as the theology of restoration, messianism, the role of symbol and praxis, angelology, the relationship of covenant and eschatology and, crucially, the location of all these themes within the context of a sense of continued exile.

As an introduction to the DSS and the questions that still surround them, the book is useful to any student. One caveat, however, is that the discussion of the debates surrounding the identification of the authors of the DSS (54–78) is rather convoluted and students may find it helpful to supplement Pate by reading the appropriate sections of E.P. Sanders’, Judaism: Practice and Belief 63 bce–63 ce, (London: SCM, 1992; 342–66) or of the excellent introduction in F. Garcia Martinez, The Dead Sea Scrolls Translated: the Qumran Texts in English (Leiden: Brill, 1996, 2nd edition).

The great value of this book lies in it comparison of the DSS and the NT. In tracing the similarities back to a common apocalypticism, Pate’s work has an important apologetic function against the accusations made by John M. Allegro and, more recently, Robert H. Eisenman that the NT simply plagiarised the DSS. In so far as such ideas still persist at a popular level, Pate’s argument is useful for any Christian to understand. Furthermore, by stressing the extent to which apocalypticism affects the trajectory of NT thought, Pate’s work contributes to the growing awareness in current NT studies that a proper understanding of Jewish apocalypticism is essential to understanding the NT as a whole.

The only criticism of note that may be brought against the work is that in drawing heavily on the work of NT. Wright, and in particular his emphasis on story-subversion, Pate may occasionally be charged with failing to note the subtlety of the NT use of OT and Jewish material. In subsuming everything under the heading ‘Subversion’, the issues of whether allusions are positive or negative, or whether some may simply be employed in order to resonate with a particular audience, are glossed over. This comment in no way detracts from the value of Pate’s work or conclusions; indeed, it may be an inevitable sacrifice in such a broad study. Rather, the comment is intended to say that there are subtleties still to be explored and work still to be done in this area. With that in mind we may return to praising Pate, for surely he has built a broad foundation upon which later research may be based.