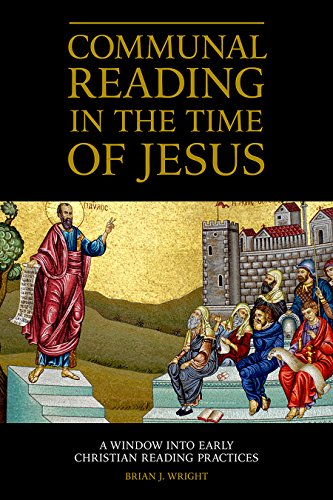 Communal Reading in the Time of Jesus: A Window into Early Christian Reading Practices

This book, the product of Wright’s doctoral studies at Ridley College, challenges the current scholarly consensus regarding how early Christians would have interacted with written texts in the first century CE—a consensus to which the author formerly subscribed. In contrast to the prevailing view that reading was an elite phenomenon and that 90% of the population was illiterate, Wright contends that communal reading events were geographically widespread in the Roman Empire and exhibited a staggering diversity of venues, occasions, genres, readers, and audience members. (By “communal,” he means involving two or more persons, whether in a public or private setting—in other words, Wright is not addressing silent or individual reading.) Furthermore, Wright asserts that the earliest Christians centered their communities on such reading events, creating a distinctly bookish culture in which Old Testament, apostolic, and other texts were read aloud, heard, and discussed.

In chapter 1, Wright declares that the “entire subject of communal reading events and their role in controlling literary traditions has been largely neglected in early Christian studies” (p. 4), which he then substantiates by surveying the relevant scholarly literature and the recent discussion of “quality controls” for the transmission of the earliest Jesus traditions. Chapter 2 lays out the limits of his study: Wright will examine literary evidence that can be reasonably dated to the first century, which may or may not include certain key Greek and Latin terms. Chapter 3 argues that economic and political conditions in the first century Roman Empire were favorable for communal reading events and that writing materials and manuscripts were not as cost-prohibitive as previously imagined. Likewise, increased travel and mobility would have fostered the distribution of written texts and their recitation in diverse locations. Chapter 4 describes the social dynamics at work within communal reading events, including audience participation, and claims that these events were “deeply embedded within the social fabric of society” (p. 45). This chapter also explains the Jewish background to early Christian reading practices, particularly the role of synagogues.

In the opinion of this reviewer, the preponderance of evidence Wright marshals in this book more than establishes his baseline contention that communal reading events were geographically widespread in the Roman Empire of the first century CE. Furthermore, although one might occasionally quibble with the NT evidence that Wright sets forth in chapter 6 and the conclusions drawn from it, it is hard to argue with his cumulative case: communal reading of various texts is well-attested among the earliest Christians throughout the Empire. However, the most interesting and potentially most significant parts of this book can be found around the edges of his central argument, when Wright hints at the implications of his findings for historical Jesus research, orality and literacy, New Testament textual transmission, early Christian social identity, and even canonicity. Throughout the book Wright makes provocative forays into these areas, but then quickly returns to his more limited and judicious focus on mapping the geographical distribution of reading events. (Wright’s published articles, reviews, and interviews have begun to fill out his broader perspective on these controversial matters.)

The largest contribution of this book is its careful culling and analysis of literary evidence illuminating a woefully neglected topic. Now that Wright has compiled all this data, the task remains to sort through and debate all the implications. It is a testament to the importance and brilliance of this book that one may wonder, as D. A. Carson does in his endorsement, “why these things have not been brought to light before.”