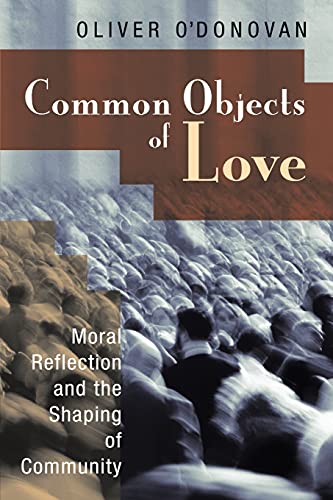 COMMON OBJECTS OF LOVE: MORAL REFLECTION AND THE SHAPING OF COMMUNITY

In this book, which started life as the 2001 Stob Lectures at Calvin College and Seminary, Oliver O’Donovan explores the communal nature of moral reasoning. He begins with Augustine’s assertion that we know only as we love. This means practical moral reasoning involves more than decision making (what we should do): it is grounded in what O’Donovan calls ‘moral reflection’ (how we should live). In other words, our posture towards the good and evil around us—recognising and affirming them as such—is the basis for our moral actions. So moral reasoning is a collective enterprise because it involves shared commitments. O’Donovan adopts Augustine’s definition of a people as a multitude united by ‘common objects of love’ (21)—that is the truths and ideals that a community chooses to affirm along with those it rejects.

In the remainder of the book O’Donovan explores the way in which societies communicate their common objects of love through ‘representative signification’. Societies unite around representative signs (objects, persons, ideals). These constitute the traditions that provide social continuity and cohesion. It is this that makes reflection on the past important: a community’s view of past actions affects the moral stances it takes in the present.

The encounter with the signs of other communities (pluralism) creates an urgency within communities to maintain their traditions, but this urgency itself betrays the recognition that the presence of other traditions relativises one’s own. Modernity, says O’Donovan, while born out of a rediscovery of the relativity of traditions, ‘concealed its own transmission of tradition by a tradition of scorn for tradition’ (38) The problem is not difference itself for the Bible ends with a vision of different peoples and nations united before the throne of God. The problem is that, without this eschatological vision, societies have no basis for self-restraint or patience. Instead they deify or absolutise their distinctives. True secularity requires us to accept that social identities are shifting and provisional.

The final chapter is a critique of modernity with a focus on its distinctive means of communicating representations, namely publicity. Publicity is a mode of communication in which representation becomes an end in itself. The iconoclastic controversies of the eighth and ninth centuries taught the church a disciplined use of images under the authority of the Word. Images could not replace reality—in particular the reality of Christ’s universal lordship. Western communications, however, are the latest manifestation of modernity’s colonial conquest. O’Donovan, speaking shortly after the events of September 11, 2001, argues that the rise of radical Islam is a reaction to these universalising ambitions. O’Donovan concludes with the book of Revelation. The response to the absolutisation of political representation is the worship of God for in worship we allow ‘the one representative image to rule all other images’ (71).

This is short book with a tremendous amount squeezed in. As so often with O’Donovan, you hope the next sentence will be a clarification the previous one, but instead it moves the argument on still further out of your grasp! But it repays careful reading. The book of Revelation offers an important source for a Christian response to the idolatries of our globalised, modern would and O’Donovan helps trace its pertinence.