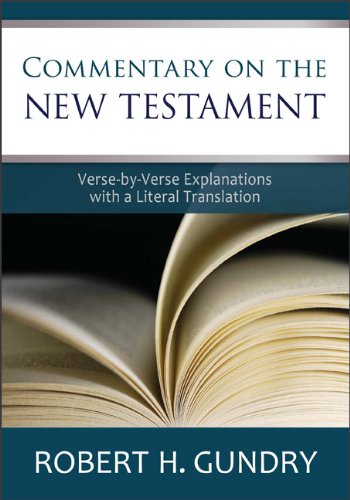 Commentary on the New Testament: Verse-by-Verse Explanations with a Literal Translation

In a day when biblical studies is marked by increasing specialization and swelling bibliography, it is refreshing to see a NT scholar at the zenith of his career venture a one-volume exposition of the NT. It is doubly refreshing to see such an effort designed to “serve Christian ministers, Bible study leaders, and serious-minded lay students” who lack the time or training to profit from the very kind of technical scholarship that has marked so much of Robert H. Gundry’s output (p. ix). Even so, Gundry’s aim is to be simple without being simplistic. His stated hope is that his academic peers “may discover in the comments many particulars not to be found elsewhere yet worthy of consideration” (p. ix). This is an ambitious undertaking indeed. Has Gundry succeeded in accomplishing what he has set out to do?

In some respects he has—and marvelously so. Gundry’s treatment of Rom 1:1–7 is clear and simple, and it disarmingly reflects extensive engagement with the secondary literature. His exposition of Gal 2:11–21 carefully and thoughtfully sifts recent discussion in Pauline scholarship concerning justification and the Mosaic Law—all without a single footnote. His comments on Matthew and Mark present the mass of his scholarship on these two books in concise and mature form. The connections, for example, that Gundry observes between the OT and Matthew’s accounts of Jesus’ birth and death will inform student and scholar alike.

Gundry’s expositions also have an eye to contemporary issues. His treatment of 1 Tim 2:11–14 expressly addresses the question whether women may preach when the church gathers for public worship. He not only concludes that Paul is forbidding women from teaching the assembled congregation, but also constructively responds to the objections that Paul’s statements “apply . . . only to a local condition in Ephesus” or to “a cultural condition prevalent throughout the first-century Roman Empire and to any like condition in other times and places” (pp. 836, 837).

Gundry’s commentary at points leaves the reader wanting more. Gundry has purposefully “omitted scholarly documentation and discussions of authorship, date, sources, historicity [and] harmonization, and similar topics and concentrated instead on what is likely to prove useful for expository preaching, teaching, group discussion, and private edification” (p. ix). Sometimes, however, focused discussion of certain interpretative questions would have helped the reader. Three examples come to mind.

First, nearly three decades ago, Gundry famously classified portions of Matthew’s Gospel as “midrashic.” This approach towards Matthew occasioned considerable discussion within evangelical biblical scholarship. Given the controversy surrounding Gundry’s earlier publications, one wishes that an explicit discussion of the genre of Matthew had been included in this commentary.

Second, one must discover Gundry’s overall approach towards Revelation inductively. The result is that the reader is left trying to discern whether Gundry’s exposition of Revelation is futurist, idealist, or preterist; premillennial, amillennial or postmillennial. More beneficial to his readership would have been an initial statement in which Gundry situated his exposition within the interpretative landscape of Revelation.

Third, in his comments on Rom 5:12–14Gundry observes that “the present repetition of [‘all have sinned,’ cf. Rom 3:23] points to everybody’s having sinned individually, for himself. It’s not that God counted Adam’s sin as everybody else’s too. Paul isn’t talking here about accounting. He’s talking here about invasion: Adam’s sin gave sin as a personified force entry into the world” (p. 587; cf. 589). The space constraints of a one-volume commentary have undoubtedly hindered Gundry from both interacting with the centuries of reflection on these verses and defending his reading of the apostle’s words. In light of the importance of this issue to NT theology, one wishes that Gundry had provided his readers with an acknowledgment of the range of views that the history of interpretation has bequeathed the modern church.

In all, Gundry’s Commentary on the New Testament is an exegetical achievement. It comprises a digest of the life-long labors of a careful and seasoned student of the NT. As such, it deserves a place on the shelves of serious students of the Scripture. In a day when many commentaries offer the reader parvum in multo (very little content in many words), it is refreshing to see a work that offers multum in parvo (much content in a few words). Provided that it is read with care and discernment, and alongside fuller commentaries of the books of the NT, Gundry’s Commentary will richly repay the reader.