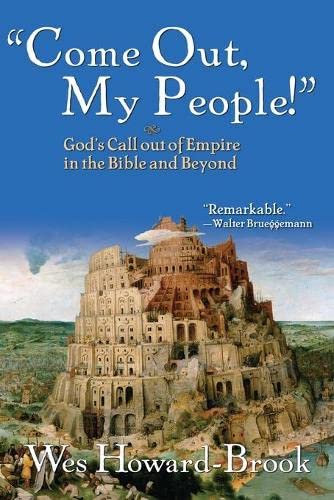 “Come Out, My People!”: God’s Call out of Empire in the Bible and Beyond

While current discussion in NT study approaches the question “What is Christianity?” by giving attention to canon, the relationship between early Judaism and the early Christian church, and so on, this work approaches the same question from a very different angle. Underlining Christianity’s often close relation to temporal power (and its frequent misuse) across the centuries, Howard-Brook sets himself the task of not only distinguishing, but separating Christianity from those entities that attempted to make themselves its master. A second volume on the relationship between Christianity and empire will develop his exploration (p. 473), while another will explore America’s relation to the two “religions” he outlines (p. 111n31). The book includes an extensive bibliography (J. G. McConville, God and Earthly Power: An Old Testament Political Theology: Genesis-Kings [LHBOTS 454; London: T&T Clark, 2006] is strangely absent) and a combined author/subject index; there is no Scripture index.

Howard-Brook’s analysis moves between two poles, one of which sees Christianity as a “religion of empire” and the other as a “religion of creation” (p. xiv). He is sensitive not only to the current (and frequently spirited) discussion of religion’s relation to the public sphere, but also to the frequency with which those who reject Christianity give as their reason for doing so its past and present foibles, especially its association with intolerance or violence. The book opens with a theoretical orientation before giving over 400 pages to a survey of its theme across much of the Christian Bible and a few non-canonical or deuterocanonical works like Enoch and the Psalms of Solomon.

The Bible, Howard-Brook suggests, “gathers together witnesses to a passionate, historical argument over what it means to be ‘God’s people’” (p. 4). He focuses on the horizontal and contrasting aspects of “religion” in the Bible, defining “religion” as “the attitudes, beliefs, and/or practices that bind individuals together as a ‘people,’” and contrasts the religions of creation and empire in the following categories (in the following parentheses, the religion of creation’s position is followed by that of empire (pp. 5–6]):

Power and its allocation thus figure largely in Howard-Brook’s treatment of his topic.

The following summaries exemplify how the author’s reading strategy understands the biblical material. Taking for granted Genesis’s origin during the Babylonian exile, Howard-Brook suggests that its function was to counter the Babylonian perspective, which typifies the religion of empire. He suggests that Eve’s punishment of “many childbirths” is “a warning about the consequences of surplus agriculture” (p. 26), and God’s warning to Cain (Gen 4:6–7) “evokes the lure of Babylon’s wealth and splendor, grounded in ‘redemptive’ violence [the Babylonian god Marduk’s killing of the primordial goddess Tiamat and his establishment of Babylon as his city as recounted by Enuma Elish] and surplus agriculture” (p. 34). Abram complies with the divine command in Gen 12 to leave behind all that by which “people can become captured by empire and its religion” (p. 53), while Joseph interprets events according to “an imperial sense of the ‘divine order’” that favors the Pharaoh and sees the Israelites settling “in a land of empire” (pp. 88–89). In the NT, Howard-Brook finds the Fourth Gospel to be as anti-imperial as the Synoptics (p. 435). While the world’s peace (and Rome’s in particular) is “maintained by the twin pillars of lies and violence,” Jesus’ promise of peace is the result of his having conquered the world as he “stands in God’s truth and embodies God’s love” (p. 444).

Much like the Gospel of John, Howard-Brook has written with a purpose: “we must not continue to allow the confusion between the ‘religion of creation’ and the ‘religion of empire’ to justify ‘Christian’ war, racism, exploitation, and other practices of domination and exclusion” (p. 474). While Christians should be in agreement with at least this general program, such is not always the case, and Howard-Brook’s work is thus timely and needed. While he sometimes advances novel interpretations, both his subject and his presentation of it make the work stimulating and provocative.

Although perhaps inevitable to some degree, it seems that the work’s focus on the theme of power has disrupted the varied yet coherent worldviews of the various biblical books. Despite his assertion that the first sin in Gen 3 was “the use of the human mind to respond to experiences and ‘needs’ that were not firmly grounded on God’s word alone” (p. 31), Howard-Brook seems to make the issue of power primary and to minimize the importance of the epistemological-soteriological focus of Gen 3. There is no mention of Gen 3:15 in that context, and throughout the volume little attention is paid to how one might move from empire-religion and enter creation-religion. Howard-Brook’s understanding of “eternal life” in John as “literally” (and therefore only) “life of the age” seems forced by his focus on the source of Jesus’ power and kingdom rather than its essence, and is paralleled by a pronounced de-emphasis on salvation from sin in favor of deliverance from “death threats” made by empires (p. 446). Indeed, it is perhaps the governing empire-creation polarity itself that effectively relegates soteriological concerns to the background, a subtle example of the interpreter’s power to mold what the text may say.

While Howard-Brook’s conceptualization of the Bible’s storyline may have transposed major and minor elements of the biblical plotline, it still merits attention as an extensive, if not comprehensive, treatment of its theme in dialogue with contemporary thought and biblical interpretation.