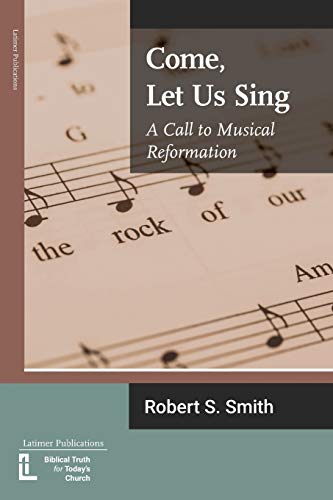 Come, Let Us Sing: A Call to Musical Reformation

Some activities are famously difficult to perform at the same time—patting your head and rubbing your stomach, chewing gum and walking. And for many people, this list of competing activities would include singing and thinking. Singing, after all, seems to emote from the heart and erupt from the body while thinking is the purview of nobler realm of the mind. And yet, at their best, Christian gatherings consider this seeming dichotomy of heart and head as a feature rather than a bug.

Here to help readers think about congregational singing (so that congregations can thoughtfully sing) is Rob Smith. Smith serves as a lecturer in theology, ethics, and music ministry at Sydney Missionary & Bible College. (In the interest of disclosure, it is only fair to note that Smith also serves as Themelios’s book review editor for Ethics and Pastoralia, though he did not commission this review.) His previous book (co-authored with Mike Raiter) primarily exegeted biblical songs in their context before drawing out implications for believers (Songs of the Saints: Enriching Our Singing by Learning from the Songs of Scripture [Sydney: Matthias Media, 2017]). In this new book, Smith draws together insights and implications from his studies to help believers thoughtfully navigate the sometimes less-than-thoughtful world of congregational song.

Smith begins his discussion of congregational singing by considering the reasons for the Christian gathering. After a discussion of terms, Smith considers the revolutionary transformation that Jesus Christ enacts in worship. Christ’s once-for-all sacrifice for believers has transformed them into priests, called to sacrifice spiritually in a new temple (p. 43). Smith writes, “when we come together as Christians, we clearly don’t come in order to start worshipping—our worship started the moment we came to (and became part of) the true temple, Jesus Christ! If anything, we come together to continue worshipping.… The distinctive thing is that we come to do this with one another and with a particular goal” (p. 46).

The particular goal Smith has in mind for the Christian gathering is edification. He is hardly alone in this conviction, but one of Smith’s contributions is his tying of the identity of believers (the temple) to the activity of the gathering (building up). The importance of the task of “building up” derives from the importance of the building. The task of edification takes on a richer sense when the edifice is properly understood.

Smith begins the meat of his book by discussing how congregational singing counts as praise to God, what he considers “arguably, the central purpose of singing in Scripture” (p. 70). He looks to the Psalms to find what he calls the “two faces of praise”—adoration and advertising (p. 75). Smith goes to admirable lengths to demonstrate the relationship between doxological praise and evangelistic proclamation, exhibiting the Scriptural foundation that other writers have assumed without making explicit. Smith argues that “our singing as God’s people is not a retreat from the world but a key part of our witness to the world” (p. 77). Come, Let Us Sing marvelously exhorts Christians not to be afraid of the world’s threats without becoming callous toward the world’s needs. The length of Smith’s book allows him unusual opportunity to wrestle through the paradoxes of congregational singing. Praise is both natural and difficult, celebratory and mournful, divinely appointed and demonically opposed. Smith encourages believers to persevere through these difficulties by remembering God’s worthiness, his commands, and his desire for our praise. From this vantage point, praise should be thankful, fervent, and encouraging to others.

Having considered the relationship between singing and praise, Smith next considers the rich relationship between singing and prayer. Here, Smith takes a restrictive (unnecessarily restrictive, from my perspective) view of prayer, arguing that prayer is best understood as petitionary. (“Confession is confession, thanksgiving is thanksgiving, but prayer is asking” [p. 115].) Smith highlights the ways that singing expresses and enriches unity a church’s prayers, though he wisely nuances Bonhoeffer’s insistence upon unison singing (p. 124). In addition to the unity, Smith argues that “the very activity of singing truth assists us to access and process the emotional reality of that truth” (p. 128). Since biblical prayer is often associated with posture and bodily gesture, biblical singing of prayer often benefits from such accompaniments. Smith evokes Luther’s quip: “Do not despise these things, because Scripture and Christ Himself praise them” (p. 154).

In this section and in others, Smith draws upon the Psalter as a help to “pray both in a truly human way and in divinely inspired words” (p. 132). Smith advocates for churches to have a much more immersive relationship in the Psalms, yet he does not advocate for exclusive psalmody, since “although the Psalms clearly testify of Christ (Luke 24:44), they do so obliquely, presenting Him ‘in the shadows’” (p. 140). In a delightful bon mot, Smith writes that Christian congregations must “always sing the truth of Scripture, whether or not we sing the actual text of Scripture” (p. 141).

The third section of the book discusses “Singing as Preaching.” From this reviewer’s perspective, this is an unfortunate designation. Perhaps my sensitivity reflects my North American context, but referring to singing as “preaching” may prohibit female involvement in corporate singing in many complementarian churches. While Smith explicitly says, “I am using the language of preaching in a fairly general sense to refer to the many and various ways that God’s people (individually and collectively) communicate God’s truth to each other and to the world” (p. 167 n. 3), this will not prevent people from other traditions hearing the term from a narrower, clerical/elder/pastoral perspective.

Smith argues that congregational singing ought to reflect the Psalms and their “clear and carefully crafted didactic purpose” (p. 176). Singing about God’s past faithfulness provides God’s people with perspective for their present circumstances and awakens hope for their future deliverance. Thus, “singing is one very powerful way in which God’s servants have (and therefore can) remember the living Word of the living God” (p. 185). In one of the strongest sections of the book, Smith illustrates this biblical reality with an in-depth study of Revelation’s songs.

Beyond the brief quibbles discussed earlier, Come, Let Us Sing is a profoundly sensible and wise book. Helpful to any member of the congregation, the depth (and length) of Smith’s biblical exegesis and theological discussion will particularly reward study by church leaders and aspiring ministers of music. This fall, I assigned it for a classroom of about twenty undergraduates and found it very useful for both surveying the biblical data and for starting fruitful classroom discussions.

I encourage all to read Come, Let us Sing. May it assist believers who endeavor to follow faithfully the Apostle Paul’s example to not only sing praise with their spirits, but to sing with their minds also (1 Cor 14:15).