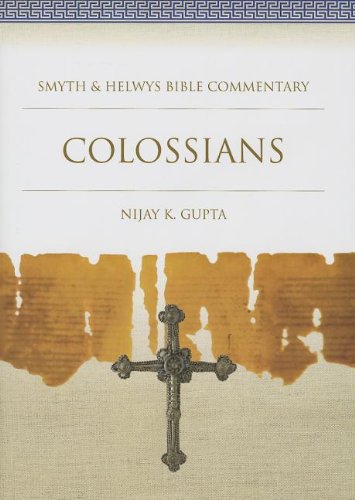 This new addition to the wealth of scholarly commentaries on the Epistle to the Colossians by Nijay Gupta (Assistant Professor of Biblical Theology and Exegesis at Northeastern Seminary on the campus of Roberts Wesleyan College) is brief but powerful. It is a useful and accessible commentary, well-written, well-researched, and exhibiting a refreshing catholicity of representative viewpoints from across Christian denominational and theological perspectives. From Chrysostom to Calvin to Wesley to Bonhoeffer, Gupta interacts with ancient patristic, reformational, Wesleyan, Calvinist, Roman Catholic, Neo-orthodox, and evangelical scholars, providing illuminating exegetical details in conversation with the Church through the ages and inspiring stories which illustrate particular points that he draws out of the text of Colossians. The result is a stimulating read and a scholarly, yet practically-applicable and approachable work which stands on its own in the current world of Colossians commentaries. I speak here as one who has read just about all of them during my time studying Colossians as the focus of my doctoral research at the University of St. Andrews in Scotland.

My initial expectation because of the marketing and structure of the commentary, which comes with a searchable CD-ROM and which is laid out in a textbook-esque manner, was that perhaps this commentary would be geared toward sermon preparation, and would thus be only mildly academic in nature. This is not the case at all. Gupta is both a gifted exegete and teacher. His presentation is instantly easy to follow and infectiously written. Thus, it is perfectly suited for readers of every level, and it is ideal for the discerning pastor and Bible student. Furthermore, Gupta’s own original exegesis, and his interaction with the exegesis of the other Colossian scholars is admirable and substantive in its own right, making a real contribution to the field and worthy of serious consideration and interaction both in the pulpit and in the guild. Of course, as with any work, there are strengths and weaknesses. Let us examine them both, beginning with a selection of a few strengths from the project.

First, Gupta opts for Pauline authorship for Colossians, on the basis that he considers the evidence against Pauline authorship to be insufficient to conclude that the epistle was written by someone else (cf. Col 1:1; 4:18). He is in good company here including: Irenaeus, Tertullian, Clement of Alexandria, Calvin, O’Brien, Moule, Wright, Percy, Kümmel, Guthrie, Aletti, Bruce, Barth/Blanke, and Moo, just to name a few. As the Knight of the Holy Grail in Indiana Jones and the Last Crusade would say: “You have chosen wisely.” But wise choices aside, Gupta’s entire section on authorship is helpful, representative, and balanced.

Second, his teaching expertise makes its way into the commentary through a number of helpful explanations. For example, his labeling of the Colossian problem as the “Transcendent Ascetic Philosophy” (p. 19) is an effective literary teaching tool which assists the reader in keeping the nature of the problem (according to Gupta, and I agree) in view. It is repeated throughout the commentary in the manner of a Big Idea, and is, in my view, accurate and beneficial. Likewise, when he refers to the central theme of Col 3:10 as the process of being “reset by the pattern of the new Adam” (p. 25), I find this to be both clever and ready to preach. It strikes me as a fresh and original contribution to the unpacking of the text in ways that translate immediately into application for one’s own life and walk, and in one’s teaching and preaching.

In manifold examples too numerous to list here, but woven throughout the commentary, Gupta frequently picks up on typically ignored elements of the text, shedding new light on important themes like “thankfulness” in Col 3:15. Within the theological weightiness and wonder of Colossians 3, “thankfulness” often gets glossed over (with the exception of O’Brien and Pao), while the focus is placed on other profound elements in the surrounding verses. Yet, Gupta’s (in my view) prophetic and exegetically-sensitive hermeneutical eye brings out something truly profound from the idea, namely, that to be thankful “is an act of faith” which “dares to establish a counter-reality over and against the bleak and dark world” (p. 27). I find this to be profoundly human and inspiring. This type of pastoral exegesis ministers to the reader while also engaging the reader in robust theological inquiries.

Lastly, in regard to the strengths, the emphasis on the church, rather than simply individual salvation is exemplary and a much needed corrective in commentaries on all of Paul’s epistles, and in Colossians in particular. It is often argued that Ephesians is the ecclesiological epistle, while Colossians is focused on Christology. However, Gupta shatters this myth by frequently reminding the reader that salvation and “spirituality” are “not about the individual in isolation but about the community and its proper health and vitality” (p. 25). Gupta picks up on and brings out the ecclesiologically-rich and central element of the Church in Colossians. While there are dozens of other exemplary points which could be noted it is, perhaps, necessary to move on to a few minor critiques before wrapping up this review.

The first and most extensive critique I have of the commentary is Gupta’s view that in Col 1:15–20 the thrones, powers, dominions, and authorities refer to specifically “heavenly” powers. This claim is made on the basis of the fact that the word “invisible” stands just before the list which suggests to Gupta that the authorities are likely referring to spiritual powers in particular. He notes, furthermore, that the στοιχεῖα “probably” refer to “elemental spirits” (p. 56). I have two issues with this. First, many rightly view the rulers and authorities of 1:16 as including far more than simply “heavenly” powers. They should include also earthly outward manifestations of the inward or heavenly powers. Second, the idea that the placement of the word “invisible” just before the list somehow renders the following words as “heavenly” is an exegetically questionable move to me. The grammar does not require or even suggest what Gupta is claiming here. When we consider that the text which immediately precedes the talk of the thrones and powers specifically indicates that a broader scope of phenomena are in view, that is to say, things on heaven and on earth, visible and invisible, Gupta’s position becomes even less likely. In addition, while I agree that there is a component of metaphysical anxiety which the Colossian philosophy is attempting to ease, Gupta insufficiently deals with other scholarly perspectives on this matter such as the view championed by James Dunn that the στοιχεῖα refer, not to demonic forces, but to the basic principles, the basic building blocks, and the particularly former religious elements of the world. Gupta’s general acceptance of the “cosmic forces” line of thinking with regard to the στοιχεῖα is also strikingly non-committal, and thus not sufficiently convincing. He notes that “it is possible that the Colossians were fearful of demonic and cosmic powers” (p. 16), that this “might” be the case (p. 16) and that “perhaps” (p. 63) the Colossians feared evil spirits. More convincing would be a sustained argument for this hypothesis and a more determinative choice of language to display his own confidence in this interpretation against other exegetical options. Lastly on this point, the lack of interaction with the work of Walter Wink on the powers is a noticeable ‘history of research’ lacunae in Gupta’s treatment of these verses.

A second point of critique would be concerning Gupta’s statement that the “forgiveness of sins” in Col 1:12–14 is not forensic but rather focused on the “power and hegemony of sin.” He doesn’t sufficiently prove that sin as a power, rather than sin as guilt or that which renders one subject to punishment is in view here by Paul, or that this distinction ought even to be made. His emphasis on the ‘power’ of sin makes sense, given his emphasis on the στοιχεῖα as cosmic forces. However, a better reading of 1:12–14 would center on the idea of transfer from a sphere with a corresponding ‘power’ or ‘way of life,’ rather than on power itself. Paul talks about a transfer (μεθίστημι) from “the dominion (ἐξουσία) of darkness” to another sphere, namely, the kingdom (βασιλεία) of the son which is characterized by his love. Indeed, each realm, so to speak, has its corresponding “power,” and ἐξουσία can of course be translated ‘power’ or ‘authority,’ but the focus in this set of verses is on the sphere, not the metaphysics of the power associated with the sphere.

Lastly, in his exegesis of the household code (Col 3:18–4:1), Gupta argues that middle voice of the verb ὑποτάσσω indicates that the “action is carried out by the person on himself or herself.” Thus, he is arguing for a direct or reflexive middle (See Wallace, Greek Grammar Beyond the Basics, 416). This is indeed possible, but in my view, not probable in this instance. As grammarian Daniel Wallace notes, the reflexive usage of the middle is, in fact, quite rare in the Koine period. Therefore, while Gupta’s main point that women initiate this submissiveness on their own is certainly not harmed and, in fact true, the grammar itself (apart from the fact that the wife is the subject of the verb and hence the one doing the action) doesn’t add anything to his exegetical point. What the middle more likely would add or indicate, however, is that the submission of the wife to the husband would have some benefit or positive effect on the wife achieved through the act itself. In this “indirect” or “benefactive” middle (Wallace, 419) the object of the verb receives the action of the verb, yet the subject, the one doing the action, also receives some benefit or effect from the performance of the action. The sense would be the following: “Wives be submissive to your husbands such that the act of submitting has some (presumably positive) effect on you as well.” Furthermore, it is possible that if this is the sense of the middle in the verse, then the universality and timelessness of the verse may take on a new, abiding ethical significance and prescriptive force.

These small exegetical issues aside, Gupta’s commentary is really top notch. It should most definitely be on the shelf of any scholar, pastor-scholar, or bible student interested in receiving a very fair, extremely representative, and exegetically-sensitive, sharp and fresh reading of the epistle. In fact, this commentary would be one of my top-five Colossian commentaries alongside those of Douglas Moo, N. T. Wright, Marcus Barth/Helmut Blanke, and Peter O’Brien. It is a work of exemplary scholarship, practical significance, pastoral sensitivity and imagination, and theological breadth.