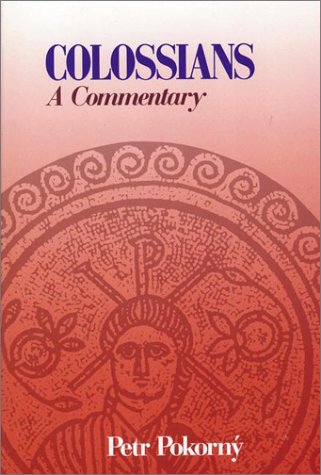 This is a clear and workmanlike translation of Pokorný’s commentary, Der Brief des Paulus an die Kolosser, published in 1987 in the Theologischer Handkommentar zum Neuen Testament series. The translator and the publishers are to be highly commended for making this commentary more widely available, not only to scholars but to theological students of all kinds.

The commentary is traditional in its format, and fairly conservative in its findings. The relatively full introduction outlines Pokorný’s approach. He discusses the text and language, the question of authorship and literary genre, the place of Colossians in the Corpus Paulinum, the deuteropauline character of Colossians, the structure of the commentary and the structure of the theological argument. Pokorný does not consider Colossians to be authentically Pauline. Regarding language, he considers the author to display basic training in Greek rhetoric. The author draws upon Paul, but a number of grammatical phenomena differ from those of the Pauline Hauptbriefe. The content indicates to Pokorný that Colossians cannot be placed close to any of the undisputed letters, including the Corinthian correspondence and even Philippians, to which it is most closely related. Instead, Colossians is related to Ephesians and the Pastorals, although not in a direct line from one to the other. Pokorný’s argument depends upon Ephesians and the Pastorals not being authentically Pauline, a question still genuinely debated in some circles. Pokorný’s recognition of the complexity of the relation among the epistles is to be commended, but it also introduces a slippage that makes it difficult to grasp how and why Colossians came about in relation to the other epistles.

Colossians is, then, according to Pokorný, in the Pauline tradition, written about 70 ce, probably from Ephesus, a centre of the Pauline school. The epistle assumes that Paul serves a normative role in view of threats of heresy. Establishing this on the basis of the use of pasttense verbs, as Pokorný does, is highly dubious. A traditional time-based rather than aspectually based view of the verb tenses predominates throughout the commentary, a position needing serious reassessment in the light of recent work on Greek verb structure.

It is regarding pseudonymous authorship that Pokorný shows serious weaknesses in his argumentation. He contends that ‘Everything that causes us to doubt the authenticity of Colossians does not at all change the fact that we must interpret it as a text that seeks to link up with the thought of the main letters of Paul and that, in this sense, automatically renders the apostolic witness’ (p. 13). This must be argued, not assumed. Pokorný discusses the various reasons for writing pseudepigrapha, acknowledging that by modern criteria they may well be considered forgeries and in that sense deceptive. He asserts that their canonical status gives them validity: ‘Calling into question their authenticity poses a new problem with which we can come to terms only by appealing to the grace of God’ (p. 16). This is an unfortunate failure to come to terms with the implications of his position.

Pokorný uses the rhetorical handbooks to structure his analysis of the argument of the epistle. He takes seriously various kinds and levels of material that have found their way into the epistle, and he attempts to differentiate these strata in the commentary, within the framework of the rhetorical structure. The use of rhetorical categories is a common device in many recent commentaries. Unfortunately, their use is undefended here (and elsewhere). There may be a case for rhetoric informing epistolary writing in the ancient world (although to this point it has not been convincingly made), but several more important questions are left unanswered. For example, what is the relation of an epistle to a speech, since speeches were the medium of rhetoric? Did the ancients ever use rhetorical categories to analyse other genres? It is probably safe to use rhetorical categories for descriptive purposes, but not safe to assume that this is something the ancients would have recognized.

Within the commentary itself, Pokorný carries on an extended discussion of the relation of the epistle to the heresy that the author confronts. He sees the epistle as making a direct response to a syncretistic movement that may well have been pre-Gnostic in orientation, as well as showing signs of Stoicism and other philosophical movements. It is not fair to give a detailed list of Pokorný’s positions on crucial passages, since his exegesis demands fuller attention, but some of his opinions are worth recording. On the reconciliation language, Pokorný emphasizes the theological characteristics, noting its relation to justification as well as rightly seeing its cosmic dimensions. On 1:24, regarding what is still ‘lacking’, Pokorný says that it is ‘the appropriation of the already complete salvation’ (pp. 99–100). On 2:14–15, he takes the verb translated ‘disarmed’ as active in meaning, rather than middle, a view with a long history but one that downplays the significance of the middle voice. On the household code (3:19–4:1), Pokorný thinks that the author accommodates his teaching to the cultural environment, but without going over the boundary of what may constitute Christian behaviour. The teaching is seen as contrasting Christian life with life in the world.

Throughout, there are useful excurses on many topics. The book closes with a chapter on the history of interpretation of Colossians. He concludes with a paragraph on its contemporary significance, in which he reminds his readers that the contemporary message of Colossians, like that of all biblical books, must be ‘rediscovered through interpretation’ (p. 205). This is a timely reminder, and Pokorný has produced a very worthwhile book to help in the task.