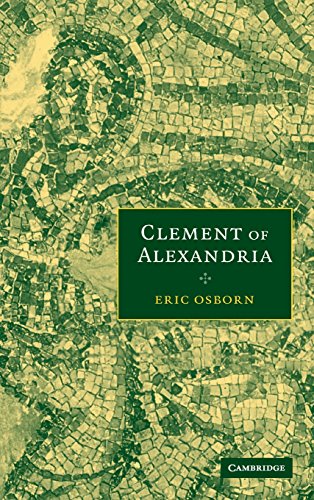 With this splendid monograph Eric Osborn returns to Clement of Alexandria, the subject of the first monograph that he published in 1957. In between have been six other books (similar studies on each of Justin, Irenaeus and Tertullian, as well as treatments of Christian philosophy, theology and ethics) and many articles, an output that has established their author as one of the leading authorities on the development of Christianity in the second and early third centuries.

Clement, suggests Osborn, is someone who appears complex, but turns out to have clear concepts. Although saturated in the Greek philosophy of his day, he was nevertheless a biblical theologian with a clear grasp of divine love as the core of the Christian gospel—a gospel recorded in Scripture, the written expression of truth and the bedrock of his work, but which required to be explained in the philosophical idiom of the culture in which he lived.

Osborn’s presentation of Clement’s thought is authoritative, clear, learned and sympathetic, but detailed and technical. His monograph is therefore more likely to be of more use to other scholars and postgraduate students than to most undergraduates, many of whom may not encounter Clement in their studies. Those who do should certainly read at least his introduction and conclusion. The passion that the author feels for his subject is infectious, and his sympathetic engagement with Clement’s use of Scripture in a context very different from our own raises wider questions about how Christians in different cultures may best interpret Scripture so as to make its claims intelligible and relevant to those around them.