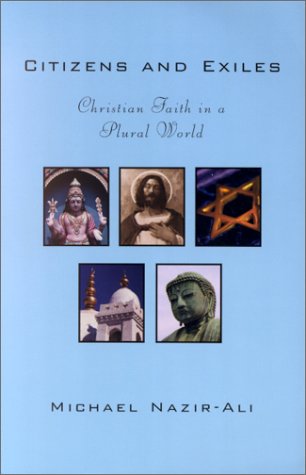 Citizens and Exiles: Christian Faith in a Plural World

Readers who have appreciated the Bishop of Rochester’s previous books on mission, interfaith dialogue and Islam will welcome this successor to his 1995 book Mission and Dialogue. This interesting, thought-provoking and wide-ranging volume explores Christian systematic and applied theological themes with reference to the cultural pluralism of particularly the West. His aim is to open Christian eyes to God’s reconciling activity in the world and to suggest ways in which Christians can get involved in this work, whether through interfaith dialogue; through the building of local and global community; through advocacy on behalf of the poor and oppressed; or through the reduction of conflict in society.

Part One of the volume, ‘What Christians Believe About God’, begins with a brief overview of some concerns raised by religious pluralism. With reference to the impact of Christianity upon, for example, Neo-Platonism, Sufism, and the Hinduism of Ram Mohan Roy, Rabindranath Tagore and Gandhi, Nazir-Ali demonstrates that ideas cross cultural boundaries; there is a process of influence and change as faith communities encounter each other. ‘In my view … there is intelligibility and translatability between religious traditions so that at least some of the beliefs and values of the one can be explained to the other. This is the basis both of dialogue and of mutual accountability. I believe, moreover, that interaction between religious traditions results in change, not only for individual adherents, but often for the tradition as a whole’ (13). It is on the basis of this important presupposition that the following chapters are argued.

The following chapters in Part One explore a variety of issues including the notion that there an underlying unity of religions, the significance of the belief in a supreme being (even monotheism) in primal religions, and theologies of religions based on the idea that Christ is the fulfilment of all that is best in other faiths—a thesis to which he is clearly sympathetic and to which returns several times throughout the book. Furthermore, arguing that the basis for interfaith dialogue must be Trinitarian, much of Part One is devoted to discussions of the doctrines of God, Christ, salvation and the Holy Spirit in the light of religious plurality. For example, concerning God, making much of the universal awareness of ‘the divine’ and sympathetic to natural theology, he draws on the doctrine of general revelation to argue that Scripture and our experience provide support for the view that ‘God is working in the cultures and histories of all people’ (133).

Although Part One had necessarily touched upon Christian belief about humanity and the world. Part Two, ‘What Christians Believe About the World’, provides more focused discussions of human nature, culture, society and ethics. Again, he provides some interesting and valuable comments on a variety of issues from interfaith dialogue to the sale of church buildings, and from fundamentalism to Christian attitudes to poverty and injustice.

Nazir-Ali has provided an honest and stimulating book from which Christians will benefit. Although some Themelios readers will be unhappy with aspects of his thought, generally speaking he provides a theologically conservative, open-minded and creative understanding of Christian belief which makes use of such diverse thinkers as Teilhard de Chardin, Gerhard von Rad, J. V. Taylor and Kenneth Cragg. Certainly those interested in exploring theologies of religions and models of interfaith dialogue will find it a thought provoking read. Whilst in a longer review I would want to take issue with some of his conclusions, on the whole I found what he had to say refreshing and positive. Indeed, my main frustration with the book was that he left many of his arguments in an embryonic form and didn’t develop them further. That is to say, he tends to point at ideas and begins to take the reader down what appears to be a promising path only to abandon him or her and follow another path. Sometimes it is clear where he is leading the reader, whilst at other times it is much less clear and one wishes he was in the next room discuss the matter further. Of course, looking on the positive side, this has the effect of stimulating the reader’s own thinking in areas of unparalleled importance for the Church at the end of the twentieth century.