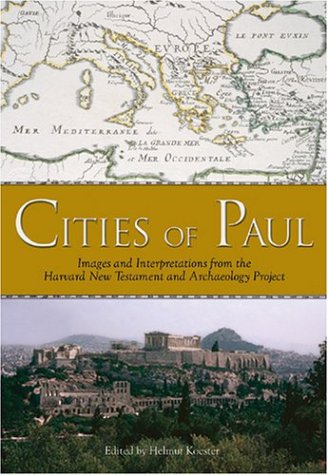 CITIES OF PAUL: IMAGES AND INTERPRETATIONS FROM THE HARVARD NEW TESTAMENT ARCHAEOLOGY PROJECT

This CD ROM, prepared by the Harvard New Testament Archaeology Project, focuses on archaeological evidence from the Greece and Asia Minor sites of Athens, Corinth, Isthmia, Olympia, Delphi, Thessalonica, Philippi, Ephesus and Pergamum. It consists of about 900 images (including maps, plans, models, coins, inscriptions, architecture, artefacts and sculptures) all of which are accompanied by commentary, compiled by specialist scholars. The photographs are generally well-produced, whereas the maps often lack detail. The commentary is a particular strength. Rather than merely brief captions, it often amounts to as much as a couple of paragraphs per image, and includes relevant additional bibliography. This offers sufficient detail for a general audience, but inevitably is insufficient for the detailed researcher. The focus is clearly on the Pauline period, but material from slightly earlier and later periods is also occasionally included.

The images and commentary are accessible by means of dedicated, but basic, presentation software. This allows the user to select from the wide database of images and commentary, and compile a presentation, ordering the material at will. This can then be previewed and presented (potentially using an attached data projector) by the software, alternatively, the images can be inserted into more sophisticated presentation software (e.g. PowerPoint). The commentary associated with the selected images can be ‘published’, that is downloaded to an rtf file, at which point the images (jpg) can be manually inserted. This is unexpectedly laborious, and reflects a general feel that the software is neither as intuitive nor as smooth as could be, and nor does it take to advantage of the computer interface. For example, there is minimal use of hyperlinks, and, where they do exist, they permit very limited guided navigation across the database. The images are ordered principally by ‘city’, although it is possible also to use indexes of sub-categories (e.g. maps, sculptures, coins) unfortunately, a number of images stray from their correct index (e.g. photographs appear among the ‘maps’, and an inscription is categorised within the index of ‘coins’); furthermore, the ‘titles’ of the images are not always self-explanatory when viewed from within an index (e.g. an image entitled ‘city plan’ doesn’t clearly reveal which ‘city’).

While the images and commentary may be a valuable reference tool for any student of the Pauline period, the associated software and the retail price clearly demonstrate that the product is particularly designed for the presenter, whether that be a lecturer or pastor. To this end, there is sufficient flexibility for the user to add his or her own commentary suited to a given audience.

The minimum System Requirements are declared to be:

I have been able to use the CD ROM and its associated software successfully on both platforms. A major disappointment and oversight, however, is that, although released by Fortress in 2005, on the Macintosh platform the software only runs under System 9. This is despite the fact that Mac OS X was released nearly 4 years earlier. The software therefore has to run under emulation, with its associated speed penalties and complications for the presenter or researcher needing to integrate various pieces of software in his research or presentation environment.