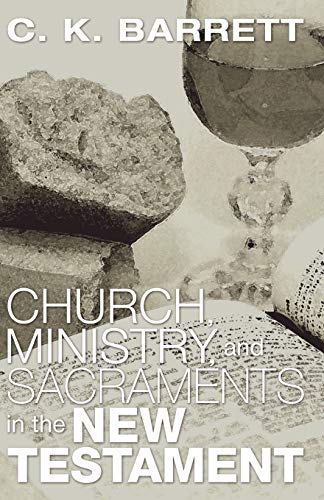 Church, Ministry and Sacraments in the New Testament

This is a racy survey of the teaching about the three themes named in the title which is to be found in the various part of the book. The author is the renowned former Professor of New Testament at Durham, and he first delivered the material in this volume at the Didsbury Lectures at the British Isles Nazarene College, Manchester. If he does not say anything very new, he at least has an ample right to his opinions on a NT topic.

Those opinions are of a Protestant and cautiously liberal sort. He takes various of the NT books to be pseudonymous. He holds that Jesus made mistakes. He is not particularly concerned to find agreement between the NT writers. Yet he leaves the reader in no doubt of his veneration for Jesus, and indeed for Paul.

The subjects which Prof. Barrett has chosen to treat here are controversial ones, and it may be recalled that, as a Methodist, he took a prominent part in the controversy over the way these matters were handled in the Anglican-Methodist Union scheme of the 1960s—a scheme which he opposed on the grounds that it was contrary to the NT. Although his exposition here does not dwell on these old battles, in which evangelicals fought at his side, it is perhaps the fullest account he has given of the reasons for his stand. They come out particularly clearly in the last chapter, where (rather in the vein of T. F. Torrance’s The Doctrine of Grace in the Apostolic Fathers) he contrasts NT teaching with that found in the sub-apostolic literature. As he says, with equal moderation and perception, there is between the two ‘a subtle difference, not easy to define but, I think, impossible not to sense. Some things that at first seemed essential lose their point; others that seemed superfluous gain in importance’ (p. 99). These latter things are largely found in the area of church, ministry and sacraments, and the importance that they aquired in the sub-apostolic period has adhered to them in many later forms of Christianity.