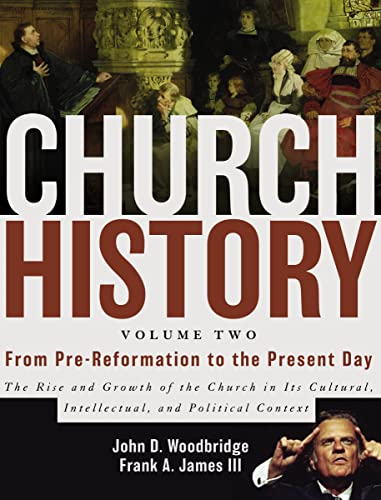 Church History, Volume 2: From Pre-Reformation to the Present Day

John Woodbridge and Frank James’s Church History: From Pre-Reformation to the Present Day brings to an end the nearly decade long wait for Zondervan’s companion edition to Everett Ferguson’s earlier volume from 2005 (now offered in a 2013 second edition). Woodbridge and James’s newest offering outlines the past five hundred plus years of the history of the Christian church, with objectivity as their stated, overarching goal. Like Ferguson’s preceding work, this volume represents history as a narrative in which “God works through sinners to accomplish his good purposes” (p. 29). Thus, the work intends to offer a truthful, unfettered account of the history of Christianity, warts and all.

Woodbridge and James’s work spans twenty-two chapters in total, beginning with the early fourteenth century and the precipice of reformation and culminating with the twenty-first century. Here, Church History: From Pre-Reformation to the Present Day follows the traditional outline of most church history survey texts, but offers two noteworthy contributions. First, unlike many of its predecessors, this text attempts to take a much less Western/Euro-centric route by engaging the history of Christianity in places like Africa, China, India, and Latin America. Second, the book’s ambitious reach into the twenty-first century distinguishes it from many other parallel attempts that avoid such efforts for fear of losing some historical distance and perspective.

Each of Woodbridge and James’s twenty-two chapters is engaging, covering not only those major people, events, and controversies one might assume to see in a survey church history text, but also lesser-known contributions to the church’s story. This balanced approach helps to paint a clearer and more authentic picture of the church since the early modern period. Here, drawing on the most recent historiography, the authors avoid romanticizing the people and/or actions of the Christian church. For instance, the presentation of Martin Luther in chapter three does not eschew the reformer’s harsh dealings with the German peasants, the consequences of his ideas untethered from ecclesiastical order, or his anti-Semitic rants later in life (pp. 130–35, 144–45). These events are placed alongside Luther’s better-known contributions to Protestantism in a holistic presentation of a very complex figure from the church’s history.

The shared authorship of this work helps clarify difficult or seemingly obscure topics by providing the perspectives of two world-class scholars with different strengths. Woodbridge and James remain confined more closely with their own personal fields of expertise. This approach permits both authors to draw from the wealth of their academic experience when handling the detailed philosophical and theological concepts requisite for any responsible portrayal of the Christian church’s history. Here, Woodbridge and James treat their subjects with lucidity and nuance, rendering the text accessible to people on a variety of academic and intellectual levels. The “for further study” sections at the close of each chapter helpfully point the reader toward more specialized, thematic, and biographical studies.

Some of the very strengths of Church History: From Pre-Reformation to the Present Day, however, also may serve as some of its most glaring weaknesses as well. The voluminous eight hundred sixty-two pages, while providing the authors ample room to navigate the period in question, are problematic on two fronts. First and oddly enough, this leaves the book strikingly disjointed with its earlier companion volume; Ferguson’s earlier volume covers twice as much time in almost half the length. Reading both volumes in tandem highlights this stark dissonance. It may also present logistical challenges for those wishing to implement this two volume series in a classroom setting. This contrast may even unintentionally suggest to some that the events of the church’s past five hundred years are worthy of more consideration than the earlier fifteen hundred. Second, although written in a clear style and prose that makes this book accessible to most Christians, theologically trained or not, the sheer volume of the text may present this work a daunting read to some, inevitably making it less approachable.

Similarly, Woodbridge and James’s reach into the twenty-first century provides some very insightful and helpful discussions on such relevant contemporary issues as the relationship between Christianity and Islam, minority and female participation in the modern church, and the Christian faith’s engagement with culture and politics. Yet, at times the promise of objectivity for the book, which was purported as a pillar of the methodology for this historical endeavor in the preface, can be lost on issues still presently being debated in the church. For instance, one can perceive some level of authorial judgment on discussions regarding the highly controversial egalitarian-complementarian debate outlined in chapter twenty-one (pp. 818–19). Moreover, while the portrayal of the Christian faith in places outside of the more traditional Western/Euro-centric model are applauded, these studies are largely confined to the modern era. This lack of expansion, beyond the scope of the Western church during the presentation of all eight centuries covered in this volume, may leave the reader wondering what global Christianity looked like prior to the twentieth and twenty-first centuries.

Ultimately, Woodbridge and James’s Church History: From Pre-Reformation to the Present Day stands as a useful survey book on the history of Christianity. It is pitched at a level most conducive to the college or graduate level, but does not stand so intellectually elevated as to be inaccessible to laypersons interested in knowing the narrative of the Christian faith. Minor weaknesses notwithstanding, this is a useful history book. There have only been a handful of church history survey texts written by evangelicals the past decade and Woodbridge and James’s work rivals any of these as far as content, readability, and faithfulness to the historic documents.