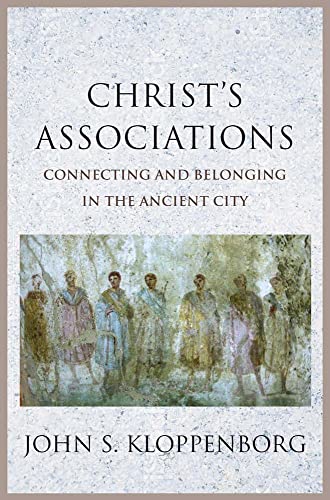 Christ’s Associations: Connecting and Belonging in the Ancient City

John Kloppenborg has been engaged for some years in studying ancient associations—groups of people bound together by a common concern. In this substantial and important book, he directs his studies toward the earliest Christian communities in order to see what we might learn about them from studying ancient associations. Professor Kloppenborg has already put us in his debt in this area through a number of articles, an edited book, and another co-edited collection of translated ancient sources on associations (Richard S. Ascough, Philip A. Harland and John S. Kloppenborg, eds. Associations in the Greco-Roman World: A Sourcebook [Waco, TX: Baylor University Press, 2012]).

Professor Kloppenborg rightly states that our modern term “religion” is anachronistic if used for the ancient world. He prefers “cultic” for “practices which are associated with devotion to a deity” (p. 10) and highlights that ancient “religion” is less about a person’s “inner life” or beliefs and vastly more a matter of social praxis, a manifestation of ancient Mediterranean cultural collectivism. Specifically, “faith” was a term of social relationships, denoting loyalty and trustworthiness (p. 15). Arising from this discussion, Professor Kloppenborg rejects the view that the Christ assemblies’ origins should be seen exclusively in the Jewish (he prefers “Judean”) synagogues, or that the Christ assemblies might best be compared to “religious” associations. Rather, at any point of comparison, it is worthwhile to study a wide range of ancient associations in conversation with our knowledge of the Christ assemblies. The following chapters then paint a picture of the ancient associations in comparison with the Christ assemblies.

Chapter 1 outlines key features of the associations. These groups were distinct from the civic bodies of Graeco-Roman cities and very varied. They could be: ethnic, drawing a group of immigrants together (such as synagogues); trade-based; cultic, united by devotion to a particular god or hero; including slaves alongside citizens; for people living in a particular neighbourhood; or the members of one extended household. We know of these associations from their bylaws, foundation documents, membership and contribution lists, accounts, decrees to honor members or patrons, dedicatory inscriptions, endowments provided by members or patrons, subscription lists, funerary monuments, and some publicly-held document registers. These are a mixture of papyri and inscriptions. For a given association, our sources may be fragmentary, but the wide range of these sources enables us to build up a picture of association life.

Chapter 2 addresses how to model the Christ assemblies. A key characteristic of ancient associations was that they gave connectivity with others. Professor Kloppenborg studies six associations which each compare with Christ assemblies, drawing particularly on membership lists (alba) and records of meetings. Among other things, he draws on network visualisations (e.g. pp. 61, 67) to see how social connectivity worked. He relates his findings to the Philippian, Corinthian, and Thessalonian Christ assemblies thoughtfully (en route, he is rather skeptical about the evidence of Acts, generally doubting its information can be trusted—this features throughout the book). Some may doubt his claim that the Thessalonian assembly was entirely male (including this reviewer), but he makes a case. He then turns to consider the significant social capital which could accrue to an association member by being connected to others through the association. That connectivity generated trust among members. This social capital is more significant, he argues, in assessing social standing than income.

The following chapter considers the physical spaces in which associations met (ch. 3), inter alia arguing that the numbers of members of associations imply that Christ assemblies would be relatively small (up to thirty—see his valuable table of association sizes, pp. 124–30) and would meet (as Eddie Adams has suggested) in dining and meeting spaces and perhaps workshops, as associations did.

“Belonging” is the focus of chapter 4, considering ways in which belonging to an association was seen and expressed. A key difference with the Christ assemblies is that we lack membership rosters, which we have for many associations. Otherwise, many “belonging” features carry over to the Christ assemblies: meals, rules, expected attendance—and baptism is a distinctive membership rite.

The urban economy was central to the ancient world. Chapter 5 reviews debate over the socio-economic status of believers, coming down close to the “new consensus” that there were some sub-elite people in the Christ assemblies (but no true elite members), and drawing out the implications for the nature of those groups. Chapter 6 reviews the social level of Christ assemblies, assessing evidence from the (undisputed) Pauline letters. Particularly helpful is his discussion of different kinds of connectivity which confer status on a group: vertical (with those of higher social status), horizontal (with other similar groups in the same or other cities), and internal (among the members). On the latter, he shows that familial language (e.g. brother, sister) was used in associations and was not exclusive to Christ assemblies.

Three helpful chapters then study features of the life of associations (and of Christ assemblies): meals (ch. 7), Paul’s collection (ch. 8), and funerals (ch. 9). Professor Kloppenborg then studies the relation of the associations to the city (ch. 10), noting ambivalence towards the polis in 1 Peter and Hermas. The believers’ use of “fictive citizenship” language is striking here, for it portrays them as members of an alternative polis (e.g., Phil 3:20). A final chapter considers how and why people joined and left associations and Christ assemblies (ch. 11). A brief conclusion and a helpful glossary of key terms are followed by 86 pages of endnotes (how I long for footnotes!) and a 41-page bibliography, plus the usual indexes.

This is a very substantial contribution to study of the early churches in their social contexts, full of valuable primary research into the ancient associations. Professor Kloppenborg is clear that he is not arguing that the associations were like the Christ assemblies in every respect—in places he notes contrast rather than kinship. He demonstrates that we have much to learn by considering the Christ assemblies in conversation with our (in many ways, fuller) knowledge of ancient associations: I have only been able to scratch the surface of the riches in this volume. It is also good to see a hardback so reasonably priced! It is indispensable (I choose the term with care) to future researchers considering the nature of the early Christian communities realistically within their ancient setting.