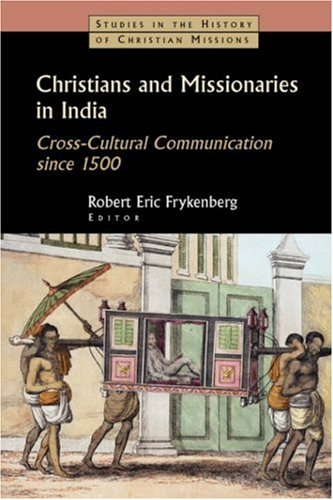 CHRISTIANS AND MISSIONARIES IN INDIA—CROSS-CULTURAL COMMUNICATION SINCE 1500

What place does the history of mission have in theological studies? Only a cautionary one? Wasn’t the whole ‘missionary’ enterprise of the last 400 years hopelessly compromised by its absorption into the colonial project? (The field of post-colonial studies is growing and includes volumes on the Bible from that perspective). Wasn’t the Christianity that was exported a colonial and cultural imposition?

The truth is much more interesting—though also sometimes infuriating. When the gospel came to Europe (from Asia), it underwent profound and successful contextualisation, over a period of 1000 years. We are now trying to unravel the gospel, in order to communicate in today’s very different cultures. (In North America the inter-twining still seems close and harder to disentangle.) In this delicate process, looking at the gospel’s encounter with other cultures is invaluable.

This book addresses aspects of ‘cultural cross-contact and communication with special reference to Christians in India’. Its thesis is that over the centuries of contact there has been vigorous and positive engagement, resulting in all kinds of unexpected changes, for missionaries from abroad, for India’s social and religious leaders, and above all for Indian Christians, who have been active participants throughout: ‘there never was any major movement of conversion … in which the primary impetus was not Indian’ (61).

The contributors are historians, anthropologists, linguists and other professionals in South Asian studies.*

In the introduction the editor, Robert Frykenberg, clarifies the fog around four key words—Christian/ity, colonialism, caste and conversion—arising from ‘complex forms of dual identity’ (2). Caste has always been problematic—more complex, diverse and subtle than other forms of social classification, like class and tribe. The issues are as alive as ever in India today.

In the second chapter he surveys the complex origins of India’s Christians, from the first centuries of the Christian era. These first two chapters will be of interest and value to anybody wanting insight into the breadth and complexity of the Christian movement around the world.

The rest of the book illustrates the argument with detailed case studies. Some look at particular areas of engagement, such as grammar, science, education and literature, with fascinating outcomes. When the DMK government came to power in Tamilnadu, south India, in 1967, it erected statues to the heroes of Tamil development. Three of the eight figures were missionaries. On the other hand, what was the impact of missionaries on the construction of ‘Hinduism’ as a unified concept?

Other chapters examine regions or people groups, such as Kerala, the leather workers of a southern district, Muslim converts in the north, Santal tribals, or a middle class family.

Kerala is particularly interesting, as Christians had been there for centuries and were well integrated into local society and culture (so well integrated that they lost their impact?). What brought change and dislocation was not only the coming of the European powers (Portuguese, Dutch, British) but also the conversion of people from very different castes.

Each study in this book illustrates the complex and unexpected results of any intervention in another culture, whether from the bearers of faith, colonial powers, commercial interests, technology or new means of communication. India has experienced, and responded vigorously, to all these and more. The process continues and accelerates today, and it is not all one way.

We can no longer presume that … Indian society was a product of an ‘imposition’ … changed significations are the … dialogic production of all members of any historical situation, though not always in equal measure (84).

There are lessons for all of us there.