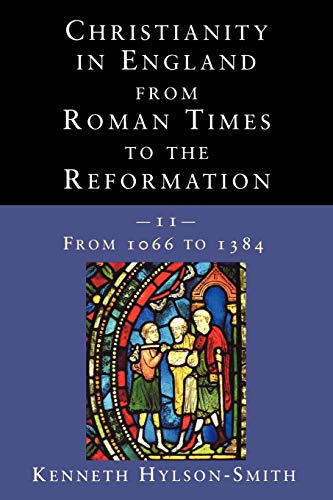 Christianity in England from Roman Times to the Reformation, Volume II: From 1066 to 1384

After successfully completing a trilogy of the history of English Christianity from Elizabeth I to Elizabeth II, Kenneth Hylson-Smith is now completing the story by writing another trilogy which goes back to the origins of Christianity in Roman Britain and traces its development up to 1559. He makes no claim to be a scholar doing original research, but it is clear that he has read widely in the scholarly literature and his conclusions are generally fair in their representation of this. Moreover, Mr Hylson-Smith is writing from a distinctly evangelical standpoint, which makes these earlier volumes specially interesting. No-one would claim that the medieval church is a favourite topic among evangelicals, and it is greatly to Mr Hylson-Smith’s credit that he has tackled the subject in such a balanced and comprehensive way, without falling prey to the lure of a pseudo-medievalism.

This second volume of the trilogy opens with the Norman Conquest and ends with the death of John Wyclif, who (in some sense at least) was the forerunner of the Protestant reformation. During this period the kingdom of England formed two provinces (Canterbury and York) of the western church, which in theory was centred on Rome but which in practice derived much of its spiritual and intellectual life from France. The Norman Conquest opened England up to French influence on a massive scale, and so England was able to participate directly in the finest achievements of medieval civilisation. This included the building of the great cathedrals, not to mention innumerable parish churches, the establishment of the universities, the development of legal norms in church and state and the production of great theology. It also involved the crusades, the spread of the monastic life and later on, the appearance of mysticism. In all of these events, English men and women played a notable part and made lasting contributions to European culture as a whole.

Mr Hylson-Smith brings all this out in a well-written narrative which pauses long enough to inform the reader of the necessary background, but which never overstays its welcome in any particular place. The far-reaching reforms introduced by the Normans are explained in their wider European context, and the important role of the monarchy throughout the period is stressed. This is important, because the later actions of Henry VIII cannot be properly evaluated unless it is understood that he was relying on centuries-old traditions that he thought supported his behaviour. The fact that he was able to persuade a significant body of opinion that he was right about that cannot be ignored, and this volume gives us the framework for understanding the later reformation debates.

Above all, Mr Hylson-Smith does his best to avoid judging the medieval church by what happened later. He recognises that the thirteenth century was a time of great achievements on every front, and portrays the fourteenth century as a time of disasters which did much to undermine them. The hundred years war and the black death undoubtedly had serious and largely negative effects, and it is true that England was still recovering from them two hundred years later. It is also true that the papacy underwent a series of crises which greatly diminished its prestige and made its relative efficiency in such matters as tax-collecting appear in a bad light. In all of this, it is the provincial nature of the medieval English church that comes through most clearly of all.

Even John Wyclif was a European, rather than an English reformer, as the subsequent fate of his ideas makes plain. His theses were taken up in Bohemia and from there found their way into the thinking of Martin Luther, whose English disciples brought them back to the mother country. Lollardy, the popular preaching movement which disseminated Wyclif’s teaching, had managed to survive in some places, but it was moribund and seems to have given way completely to the Lutheran reformation. Neither of the two versions of the Lollard Bible, for example, appeared in print before 1850, when they were published as much for their curiosity value as anything else.

Mr Hylson-Smith’s book is an excellent read, and provides just the right amount of information students and other interested lay people will want. Its evangelical tendencies will be especially welcome to many, and make his book one of its kind. For those wanting to pursue matters further, there is an extensive bibliography along with some very helpful endnotes, as well as a glossary of unfamiliar terms. The author has set himself a high standard for the third and final volume, dealing with the reformation itself, which will undoubtedly be the most controversial in the whole series. Yet that event is incomprehensible without the background which this volume contains, it is to be hoped that readers will absorb its lessons before proceeding to the more familiar but also more complex events which were to follow the medieval period.