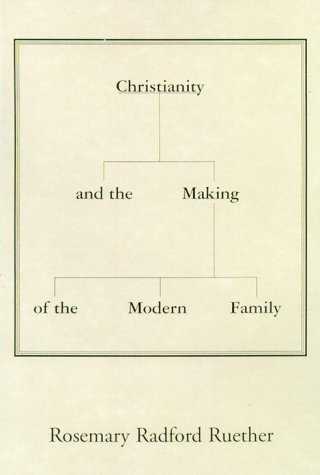 Christianity and the Making of the Modern Family

This is a strongly feminist interpretation of the history of the family. Ruether begins with an analysis of the anti-family family strands in the New Testament, then looks at the Patristic era, the Middle Ages, the Reformation, the Victorian era and the twentieth century. The 1960s—viewed with horror by the religious right as the opening of a flood tide of permissiveness—she sees rather as the decade of ‘boundless hope’ as the old oppressions of capitalism, patriarchy and hierarchy were challenged (155). Finally, she re-imagines family policies, arguing for the recognition of all sorts of family patterns including cohabiting couples and gay families. Liturgical rites should legitimate teenage couples sleeping together before they are ready for permanent commitment, and should recognise divorce. Ruether wants a sexual ethic based on care and friendship. ‘Sexual morality and immorality thus cease to be a question of a fixed institutional boundary between marriage and non-marriage, and become, rather, a process of growth towards relationality and away from exploitative use’ (219–20). A truly caring live-in teenage relationship or gay relationship would be more valid than traditional marriage where there is a differentiation of gender roles, as hierarchy is inherently demeaning.

The family in historical discussion becomes a nose of wax to be shaped according to the author’s prior conviction. Ruether is opposed to the ‘traditional’ family. Her use of history is extraordinarily selective, purely theoretical, and, unsurprisingly, matches her case exactly. A more balanced historical treatment, dealing with real people and taking account of recent historical research would provide a more nuanced story. Even a fairly basic trawl through primary sources shows that Ruether has only given one (dark, oppressive and misogynistic) side of history. To read the extant love letters between many Puritan couples proves that passionate love, mutuality, and companionship are not at all incompatible with a ‘hierarchical’ understanding of marriage. And Amanda Vickery’s recent fine work (The Gentleman’s Daughter: Women’s Lives in Georgian England, 1998) analyses the correspondence and journals of six Georgian families to give a heartening picture of mutual affection and esteem alongside a ‘traditional’ pattern of gender roles—as well as a far less restricted view of women’s roles than had previously been presented.

Feminists have for years said that the nuclear family is a recent innovation. There are aspects of the so-called traditional family which crystallised during the last one hundred and fifty years. But the nuclear family is universal (George Murdock in Social Structures analysed 250 different societies, and found it to be the basic grouping). Although the nuclear family is often represented as modern, and extended families as old fashioned, recent historical scholarship shows this to be a myth. (Beatrice Gottlieb, The Family in the Western World From the Black Death to the Industrial Age: Peter Laslett, The World we have lost—further explored, 1983, 91ff). The myth is even repeated by evangelical writers such as Rodney Clapp (Families at the Crossroads: Beyond Traditional and Modern Options, IVP, 1993).

Certainly Jesus placed the Kingdom as a higher priority than the biological family. Jesus is Lord—not parents, nor husband. If they forbid allegiance to him they must be ‘hated’ in comparison to him. But to jettison the creational pattern of a man leaving his parents and being united to his wife is blatantly selective use of the biblical evidence, which ignores God’s plan for the family enshrined in the fifth and seventh commands, which indicate that the basic building block of society is mother and father, in a covenant relationship, with the responsibility of bringing up their children.