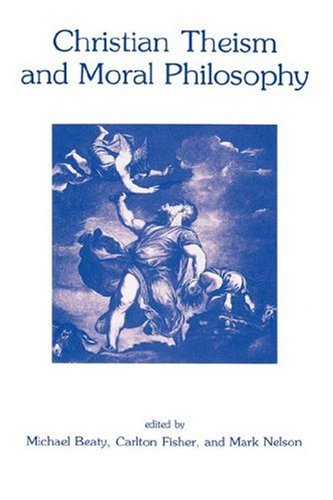 A collected volume of essays should only be judged a successful publication on judicious expedition of the editorial role. In this, a case of three editors, it is not an injustice to the contributors to select the excellent introductory essay for special commendation. The programme of the book is outlined thus: ‘three generalisations can safely be made: Christians are moral realists; they deny moral scepticism; and they affirm the centrality of the biblical mandate to love one another’. The volume is accordingly divided into three sections of four (mostly newly commissioned) essays each dealing with these respective facets of the Christian understanding of ethics: The Metaphysics of Morals; The Epistemology of Ethics; and The Ethics of Love are lucid in their justification for this approach, helpfully setting each essayist’s contribution into the context of inquiry in the broader field of moral philosophy. Contributors include Robert M. Adams, Marilyn McCord Adams, John Howard Yoder, Philip Quinn, Stanley Hauerwas and Charles Pinches.

The editors note that the division of the material is artificial to the extent that essays inevitably overlap in their treatments into the other areas. This is a strength; for the student, under the guidance of the editors’ introductory essay, is equipped to observe a number of philosophical and theological commitments operating in different ways for each of the essayists.

We do, however, catch academics in mid-research and the novice to the field might feel intimidated by the weight of the philosophical jargon. But the volume deserves careful consideration for at least two reasons: (i) the crossover between academic philosophy and theology in the field of Christian ethics cannot be shirked; (ii) students must develop their own evaluation of the editors’ claim that ‘the complexity involved in these issues warrants an appeal to philosophical expertise. Conceptual mapping and identification of logical implications and inconsistencies are some of the specific skills of the philosopher. Thus integrating theology and ethics into a coherent whole is a philosophical task’. An evaluative task which is all the more pressing for readers once they have digested Yoder’s ‘anti-essay’: ‘Walk and Word: the alternative to methodologism’; wherein Yoder attacks the very grounds for tidy analytic-philosophical contributions to the field. His thesis is broadly that the efforts of the philosopher more often straightjacket an understanding of ethics that poorly reflects traditional and biblical pluralism. In his view ‘pluralism as epistemological method is not a counsel of despair but part of the Good News’.

Yoder’s caution is apt inasmuch as the student must beware allowing theology to be moulded on philosophical presuppositions rather than vice versa. Indeed, the diversity of approaches taken by the essayists indicates that owning Christian theism does not inevitably produce agreement, methodologically or normatively. This is probably a helpful caveat for any student of Christian ethics who would presume to reach easy answers and prescriptions from selective Biblical warrant without engaging with serious thought on the level of a Christian worldview. The aptly chosen cover illustration for the volume (Titian’s ‘The Sacrifice of Isaac’) serves as a reminder of the dangers of that route. If ever a Bible story has inspired energy and angst amongst ethicists it is this one—not always to illuminating effect.

If the philosophers can teach us anything it will be, in the words of Alvin Plantinga that inspired the editors, to tackle problems in moral philosophy with ‘integrity, independence, and Christian boldness’. As Beaty and the others state in their introduction ‘one person’s insurmountable difficulty can be the central part of another’s belief system’. Being able to articulate one’s primary commitments as a Christian studying ethics is vital and these essays demonstrate ways in which this is being done.