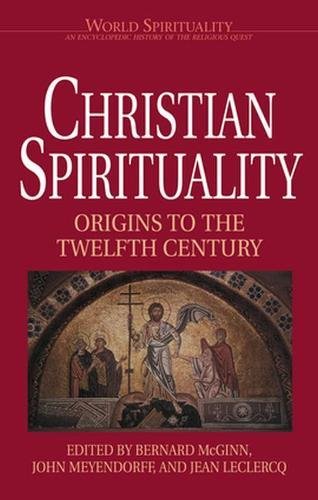 This volume is the sixteenth in a twenty-five volume series entitled ‘World Spirituality’, where each volume in the series can be read independently of the others. The series starts with primitive religious traditions, and works its way up to, and through, the higher religions, giving a detailed and authoritative picture of the types of spirituality which are characteristic of each of them. The presentation aims to be as objective as possible.

On the whole, it can be said that this aim has been achieved in this volume, which consists of nineteen different chapters, each of them written by a specialist in the field. Americans predominate, but there is a considerable input from France as well. This gives the reader the benefit of much research which is little-known in the English-speaking world, and students will find the articles on lesser-known writers and themes especially useful.

The book is divided into two distinct, and roughly equal, sections, the first dealing with people and movements, the second with themes and ideas. In the first section we are given brief but informative studies of the early Christians, of Gnosticism, of the main Fathers of the church, of monasticism, of the Pseudo-Dionysius, of the Gregorian reforms and of the religious situation in the twelfth century, which is the closing date for the volume as a whole. There is also a chapter on off-beat types of Christianity, notably the Syriac and the Celtic traditions, which are usefully summarized here.

The second section takes up various themes, particularly the main doctrines of the Trinity, Christology, Man and Grace, which shaped so much of the church’s thinking in these centuries. There are also useful chapters on icons, prayer, virginity and the role of the laity, which is a subject too often ignored in works of this kind. Each chapter and sub-chapter is complete with notes and a good bibliography, pointing the reader to further studies of the theme in question. At the end of the volume there is both a subject index and an index of names, which are indispensable for making links across the different chapters.

A book of this kind must of necessity be selective, and there is undoubtedly a bias in favour of the Eastern Orthodox tradition in this volume. No doubt that can be justified on the ground that it is a subject too little studied in the West, so that a book like this redresses the balance to some extent. However, the great casualty of this approach is Augustine, who is given fairly cursory treatment, in spite of his enormous influence. In particular, it seems incredible that there is no extended discussion of either his Confessions or of The City of God, when those two works have had more influence on Western spirituality than the whole of the Eastern tradition. Given the vast amount which has been written on Augustine in recent years, this is perhaps understandable, since information is readily available elsewhere, but it makes the omission even more regrettable in a work which tries to be comprehensive.

At the end of the day, it is hard not to think that Augustine figures less prominently than he ought because the editors of the volume (of the series?) are basically out of sympathy with his approach. Spirituality, understood as the human quest for the numinous, does not sit well with a radical doctrine of grace, in which God can only be known by self-revelation, and in which there is only one way to salvation. Nor does it agree with an approach which is rooted in experience rather than doctrine. In Christian faith, the two cannot be separated from each other, and the Augustinian tradition has always emphasized the primacy of the latter over the former. In this context, it is interesting to note that at the end of the chapter on Grace, the contributor remarks that although Augustine’s philosophical theories about human nature faded from view later on, his radical understanding of St Paul’s teaching imposed itself on the church as a whole.

Nevertheless, this book represents a great achievement of scholarship, which will be especially valuable for those who need to know something about areas of early Christianity which are not often in the mainstream of undergraduate courses. For this reason, this volume will establish its usefulness and hopefully lead to new avenues of exploration and research.

Responding to the God of history

Intertestamental Judaism, its literature and its significance

Faith and philosophy in the early church

Faith or Fear: A Reader in Pastoral Counselling

How Karl Barth Changed My Mind

Reviewed by Tony Lane
Religious Studies
VIEW ALL VIEW ALL