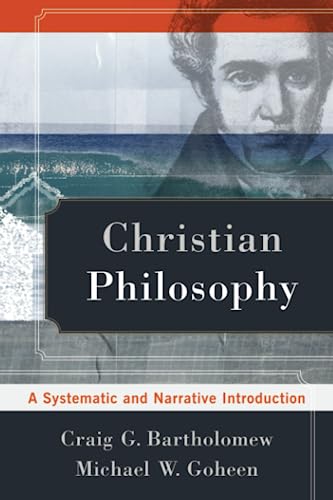 In this introduction to Christian philosophy, Bartholomew and Goheen (hereafter BG) offer stimulating analyses of the relationship of philosophy to faith. Anyone interested in that topic should take account of this book. I have not read an introductory book equal to this in clarity as well as breadth and that also is able to negotiate some of the central topics of tension and interest with respect to the history of—and a Christian approach to—philosophy.

In a rare move for literature of this sort, BG give due (and warranted!) credit to Plantinga and his philosophical colleagues (especially Nicholas Wolterstorff) for the resurgence of Christian philosophy in the latter part of the twentieth century. Not only so, but they give a very useful and adequate summary of those aspects of Plantinga’s (and Wolterstorff’s) epistemology that seek to include, affirm, defend, and incorporate some of the basic truths of Christianity. BG’s sympathies, with respect to a Christian approach to philosophy, have their focus, however, in the so-called “Reformational” philosophy pioneered by Herman Dooyeweerd and D. H. Th. Vollenhoven (more of which below).

The book begins by laying out the relationship of faith and philosophy: “Philosophy is thus never approached neutrally . . . . Broadly speaking, we work in the Augustinian tradition of Abraham Kuyper and his followers. Central to this tradition is the view that redemption involves the recovery of God’s purposes for all of creation and that no area of life, including philosophy, is neutral and exempt from religious presuppositions” (p. 24). This is a welcome note on which to begin a book on philosophy, and is all too rare in philosophical, even Christian philosophical, literature.

The authors then move to the “Narrative” introductory material, in which they survey some of the main ideas and proponents in the history of western philosophy. This survey takes its cue from Dooyeweerd, in that it shows that every philosophy has some kind of faith foundation, and that any philosophy that is not Christian is inexorably tied to a dialectic, at root, in which there can be no real reconciliation. Thus, philosophy that is not Christian is rooted in an irresolvable tension, a tension that shows itself within the philosophy itself. As a survey, BG have done a masterful job of highlighting some of the most important “systems” of philosophy without bogging down in minutiae. As with Dooyeweerd’s own work, the analysis of the history of philosophy penetrates more deeply than almost any others.

It is when BG begin their more positive construction of Christian philosophy that problems surface. For example—and there are a few of these that space will not allow—in their discussion of Wolterstorff’s critique of foundationalism, they note: “Wolterstorff is adamant that the Bible cannot save foundationalism. Scripture, as he rightly points out, does not provide us with a set of ‘indubitably known propositions’ that can function as a foundation for our theorizing” (p. 218).

This view—that the Bible does not provide us with a set of indubitably known propositions—cannot be reconciled with the best of what the Reformation affirmed. As a matter of fact, with all of their good and necessary references to Christ and to Christian, and not just theistic, philosophy, it is not easy to tell exactly how they might know of this Christ, or of what it means to be Christian. Not only so, but, as Richard Muller points out, it was the very problem of epistemology that was the “single most important contribution of the early Reformed writers” to the area of prolegomena (see his Post-Reformation Reformed Dogmatics. Volume 1: Prolegemona to Theology [Baker Books, 2003], 108). This was the case because of the recovery, during the Reformation, of the central and determining place of God’s revelation for all of knowledge. If that is true, and I think it is, then it seems any “Reformational” philosophy worthy of the name must take its starting point—not simply in an “Origin” (as in Dooyeweerd), nor in “Christ,” but in the inscripturated Word of God, which alone is able to tell us who this Christ is. Without an infallible and authoritative, self-attesting Word, any attempt at Christian philosophy will itself be fraught with dialectical tension.

A final thought or two: I wonder why BG did not even mention the efforts of Hendrik Stoker or Cornelius Van Til, both of whom were instrumental, with Dooyeweerd and Vollenhoven, in these early developments of a “Reformational” Christian philosophy. In my view, Stoker’s essay in Jerusalem and Athens would go a long way toward an appropriate structure for Christian philosophy, especially as that philosophy must relate itself to God’s revelation (see his “Reconnoitering the Theory of Knowledge of Professor Dr. Cornelius Van Til,” in Jerusalem and Athens: Critical Discussions on the Philosophy and Apologetics of Cornelius Van Til, ed. E. R. Geehan [Presbyterian and Reformed, 1977], 25–70). As Stoker argues, a philosophy that properly accounts for God’s revelation (as, he argues, Van Til’s does) is able to move to a height and depth that Dooyeweerd’s own philosophy never could; this was the case, no doubt, because of Dooyeweerd’s own deficient view of Scripture.

Second, and less central, any philosophy that purports to be Reformational should give adequate account of Calvin’s notion of the sensus divinitatis, in that such an account is necessary properly to interpret who man is and why he thinks as he does. There is mention of this in their analysis of Plantinga, but it does not seem to occur to them that the sensus is not simply an anthropological mechanism (thereby important for “proper function”), but the actual knowledge of God that all men have by virtue of God’s ever-present and dynamic revelation of himself.