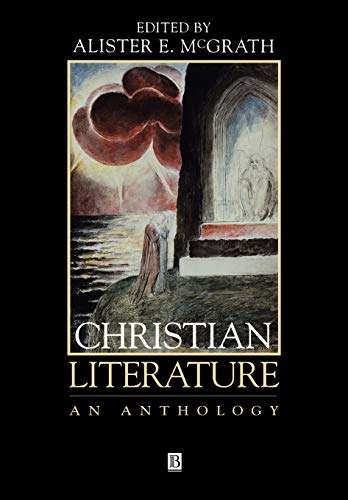 This is another big book in a series of anthologies issued by Blackwell. It contains a very wide selection of Christian texts and texts about Christianity, from the patristic period to the present. There is a concentration on English-language texts, but non-English texts include Greek, Latin, Irish, German, French, Italian and Russian in translation. Each is introduced by a brief essay, and many have panels with details of the author’s output and related critical studies. Following each is a set of questions focusing on the issues arising from the text.

The texts here are broadly well-chosen, with some fine literature being presented. I was struck by the power of Cyril’s Catechetical Lectures; the passage from Piers Plowman is a fine choice, capturing the imagistic quality of the writing; the contemporary selections generally are incisive, ironical and witty. One might carp at the selection. Why a tedious and very short passage of Dante? Why a bit of The Waste Landwhen Eliot’s Four Quartets meet the criteria of selection so much better? Still more might one question the choice of translations: Hamer’s version of Cædmon’s Hymn obscures the triadic structure of the first and last lines, which has been interpreted as having Trinitarian significance. Underhill’s translation of The Cloud of Unknowing begins, ‘That a very contemplative list not to meddle him with active life’ and becomes less comprehensible. There are numerous transcription mistakes, too: page 15 ont for not, page 28 steins?, page 57 froth for from, page 73 rues?, page 84 And do think not?, page 130 after for deter, and so on and on. The questions struggle to find the right level: some are too simple, whereas others demand both knowledge and sophistication.

Sadly, readers tend to give more weight to the editorial material than to the texts themselves. In this material we have inconsistency: a text about ‘Antony’ of Egypt, and questions about ‘Anthony’ (74); ‘Queen Rhadegunde’ on page 115, and ‘St. Radegunde’ on the next page; some Latin titles are capitalised and translated and others are not; The Dream of the Rood is in inverted commas and (for example) Beowulf is italicised. We have spoonerisms: catechumenates for catechumens, page 82, hermetical for eremitical, page 88. We have aimless repetition: the same, and only, footnote is repeated on pages 52, 63, 81 and 88. We have misleading information: Bernard of Clairvaux was not the first abbot of Cîteaux (194); the translation of the Vexilla regis of Fortunatus is not from J.M. Neale’s 1851 collection (116) but from Hymns A&M Revised,from which the earlier work differs considerably. I do not understand the assertion that Ancrene Wisse has ‘verbal illustrations’ (206), or that The Exeter Book Riddles are written in ‘a standard indeterminate form of Saxon verse’ (151).

The introductions to the English and Irish sources 600–1050 contain some garish howlers. The Anglo-Saxon invasion is placed a century or more late (123). Cædmon, who was illiterate, ‘is known to have written extensively’ (126). Cædmon’s Hymn is given in ‘the’ Northumbrian version (126) when there are five such versions, all different. The description of Old English verse as ‘accentual-syllabic’, and half-lines as ‘hemistichs’ (127) is unhelpful. Bede did not ‘pen’ the Death Song (133). The most reliable text’ (137) of The Dream of the Rood is the only text, and there are no grounds for dating it to 750. There is nothing ‘Nordic’ about it (141).

The Junius Codex, dated ‘ca. 870’, was also apparently written ‘in the late tenth or early eleventh century’ (142). The ‘commentaries’ on Genesis, Exodus and Daniel (142), are actually poems. The ‘very literal’ translation of one of the Exeter Book riddles (151–52) makes several unnecessary changes. The introduction to Ælfric’s Passion of St Edmund contradicts the text: we are told Ivar and Ubbi were spending the winter in Norfolk when the text tells us Ubbi stayed in Northumbria; we are told Edmund was captured in a battle when the text tells us that he never fought one (161–62). Wulfstan’s Sermo Lupi is consistently referred to as Lupi Sermo (167), and we are told Ethelred did not return as king after Swegn’s death when he did (167–68).

Most of these texts do not have references to ‘major studies’, which means that the writer has not bothered to look. But the introductions to Ælfric and Wulfstan do, citing as one of two books Interactions of Thought and Language in Old English Poetry. This raises the question whether the writer was aware that Ælfric and Wulfstan wrote in prose. But the book is hardly a ‘major study’: it has two references to the Edmund story (320–22 and 422), and five very brief references to the Sermo Lupi (51, 165, 307n, 312, 389n).

Excellent texts. But if the editorial material had been theology, it would have gone straight into the editor’s bin. The book’s indifference to accuracy and literary scholarship will not help students, and it will give scholars good reason for dismissing a Christian perspective in this area.