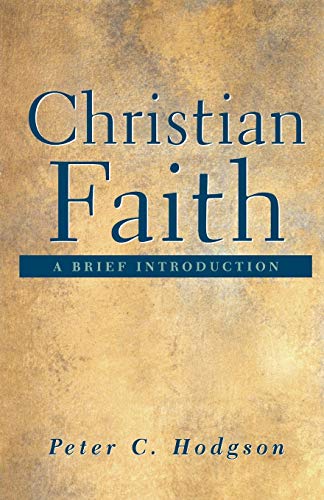 According to the story, Protestant liberal theology in its classical form was struck a fatal blow last century as a result of the horrors of the Great War. In its place sprung a ‘Neo-Orthodoxy’ of theologies which have evolved through succeeding generations of thinkers until the present time. However the older, ‘Modernist’ theology never entirely went away. While associated mostly with the realm of Biblical studies, it can also be observed in systematic theology, and that is what Hodgson’s book is—a theology in the Protestant liberal tradition. It is different from ones like Schleiermacher’s only in the period of its formal principle: the contemporary intellectual climate.

From an evangelical perspective, the principle usefulness of this book comes in its illustrating for the student what liberal systematics may look like: what shape it is, what the main themes are, which sources are employed, and how it compares to a conservative construction. As far as the first is concerned, for the most part Hodgson is content to classify his material under the traditional loci of classic systematics. The three main themes with which Hodgson concerns himself are ecological and cosmological awareness, the struggle for justice, and cultural and religious pluralism. This is not only a highly revealing selection of key topics, but also important in indicating for evangelicals where the present focal points of contemporary debate are. In choosing such themes, Hodgson is surely close to the mark; these matters must be dealt with in contemporary systematics. But the question remains as to our standard of reference in facing them. Hodgson is content to quote Cobb, Hick, Ricoeur and Tillich as his authoritative sources; the Bible has an illustrative rather than normative or even directive function, and then only as one among many.

The result of all this is a systematics with a material content in sharp relief to an evangelical counterpart … or is it? The problem of the first theme is solved by means of a panentheistic doctrine of God which differs from that of evangelical ‘openness of God’ theologians only in degree. The second theme focuses upon the cause of ‘liberation’ and equality for various minority groups, particularly in the realm of the sexual. Hodgson’s passionate pleas on behalf of homosexuals and lesbians employ analogous texts and arguments as those evangelicals who seek to justify their advocacy of various species of feminism. The third theme has already split evangelicals down the middle in matters socio-political as far as ‘principled pluralism’ is concerned, and is set to do the same in the area of soteriology regarding the salvation of those outside the sound of the gospel.

Regarding the quality of the work, I found the lack thereof a comforting omission as an evangelical. Despite the praise heaped upon it in the various reviews on the back cover, Hodgson’s book qua book is poor. The style is piece-meal, almost arbitrary, while the groups of words chosen are clichéd and repetitive, and the quotations are unfootnoted and accepted uncritically (when the quote is from a modern or contemporary author at any rate). Hodgson seems to see the theological project as consisting in some sort of artistic response to contemporary issues through the medium of Christian language; a sprinkle of ‘dynamic versus static’ here, a smattering of ‘holistic verses dualistic’ there, and a little ‘spiralling versus linear’ for final dramatic effect. Consequently, the book is not very ‘systematic’, and reads more like a series of sketches on Hodgson’s favourite post-modernist ideas and religious authors that are held loosely together on a traditional canvas which Hodgson employs for mere convenience.