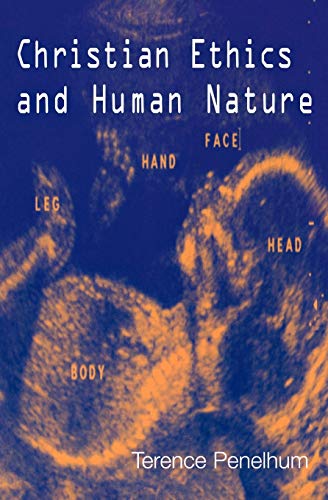 This short book, based on a lecture series, is a professional philosopher’s stab at defining Christian ethics and its more interesting tasks for the contemporary pluralist world. The heartbeat of Penelhum’s definition of human nature seems to be a modern psychology of individual desire based around Joseph Butler’s ‘conscience’: a remarkable coincidence, in fact, with modern individual ethical autonomy (7). Concern with the fact of religious pluralism (ch. 3) is uncomfortably coupled with a recognition that we, that is all humans, of any faith or none, are part of ‘Nature’ and so the problem of anthropocentrism and the environment gets an airing (ch. 4).

Given the demands of the Christian Ethic (ch. 1) do we actually have the capability to fulfil these? (ch. 2). It seems, following a reading of Pauline anthropology from Romans 7 that the human problem is not doing what we know is right. This is something that other religions share to a greater or lesser extent. Penelhum finds pluralism extremely attractive but ultimately incoherent, so (reluctantly?) settles for a fairly broad Christian inclusivism (against the clear but uncharitable exclusivism).

What then can we do with the embarrassment of choices in the pluralist world? The answer is to disambiguate using the common fund of scientific knowledge that we have available to us. Scientific education and ethical awareness of the environment mean we must re-assess the contribution that a solely Christian diagnosis of the problem of humanity gives. Hence chapter four, which takes in rejection of a traditional doctrine of the Fall in favour of some sort of existentialist notion of anxiety (91), and becoming the image of God in our capabilities (89). All this is in deference to evolutionary theory. The author posits the need for preservationist rather than conservationist attitudes. This is all very well but we should be careful before adopting a highly ‘question-begging’ thing called ‘Nature’ that must be preserved from human contamination. Just where does scientific knowledge and evolutionary theory get the positive data to talk of ‘Nature’, still less of ‘natural order’? (92). Enlightenment rationality is calling the shots here and leading to a poor ‘pick and mix’ ethic. Does this need to be the inevitable outcome for a lecture series founded by the legacy of a John Albert Hall ‘to stimulate harmony between the Christian religion and contemporary thought’ (v)?

The transposition of a lecture series to book form can be a hit and miss affair stylistically. It hits as we are drawn into a conversation in progress through the book, it misses in that, without the sympathy of being the live audience. Our conversation partner leaves us a little sold short on value for money, as an interesting question-raiser, with argumentation chiefly deployed for the ear and not the eye. Something a little less would be a fairer price in this case. As it is the book is a lacklustre affair which fits loosely together in a such a way that makes for less than compelling reading. It could have done with more disambiguating.