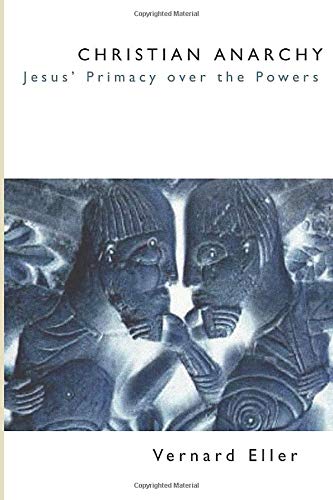 This book has one major theme, a fairly specific context and an overriding thesis. The theme is the Christian’s responsibility in the face of political power. The context is the alleged claim by most Christians who become involved in political action (whether from a right-wing or left-wing perspective, but mainly the latter) that they could operate power in society more righteously than those who currently do so. The thesis is that Christians ought to shun the exercise of political power, thereby avoiding the temptation to cast themselves in the role of messianic liberators.

The thesis is argued with all the fervour of a recent convert—he claims to have found for the first time his true Christian identity. As witnesses for his position he calls to the box Jacques Ellul, Karl Barth, Kierkegaard, the Blumhards (father and son) and, to a lesser extent, Bonhoeffer. He believes that from the Bible one may conclude that Jeremiah, Jesus and Paul were perfect examples of ‘Christian’ anarchy (though such a phrase applied to them might be thought an anachronism).

First, Eller spells out what he means by Christian anarchy. It is a consistent refusal to play the game of power-politics, in however righteous a cause it may be thought necessary. He cites, from the NT, Jesus’ and Paul’s studied refusal to condone the non-payment of taxes. From the sphere of contemporary (US) politics he takes the issue of civil disobedience in support of an anti-nuclear political strategy. He maintains that all attempts to oppose particular manifestations of power take on the nature and strategies of the powers to be defeated. Thus, to be involved in the call to change political programmes and ideologies for different ones (deemed to be more effective in bringing nearer God’s kingdom of shalom) means to accept the rules of the game as defined by the world that refuses to acknowledge God. This way there can be no experience of a truly new human society, for that can only arise out of God’s wholly free acts of grace bringing about resurrection from the dead.

It is impossible to do full justice to the arguments and evidence which are marshalled in support of the thesis. Pride of place is given to a long and detailed examination (more than one fifth of the book) of Barth’s theological pilgrimage which, Eller believes, in all its phases except one champions the cause of Christian anarchy. The final two chapters, including a moving account of the trial of his son for refusing conscription, give some indication of what might happen in human societies if grace prevailed over (self-) righteousness.

Vernard Eller intends a serious theological contribution to the ancient, controversial and long-debated issue of how Christians should relate their double citizenship. However, his arguments are greatly weakened, in my judgment, by three unfortunate factors. First, perhaps not the most important, but highly irritating nevertheless, is the question of language and style. Again and again he employs unnecessary jargon and uses words invented by himself, which either do not communicate or else have to be explained. On one page, for example, I came across ‘arkydom’, ‘unaddable’ and ‘glom’. Moreover, the discussion is tediously long. The book could probably be reduced by at least one half.

Secondly, Eller tends to caricature positions he needs to discover, in order that he may make the maximum contrast possible between them and his own. Thus, he assumes that all liberation theology (for he unashamedly generalizes) is guilty of promoting class consciousness with the expectation that class struggle, when instructed by a revolutionary faith, will issue in a class-free utopia. He might be interested to know that most liberation theologians take the evil bias of power in a fallen world just as seriously as he does, though they draw quite different conclusions from his.

Thirdly, and this is the nub of my controversy with his thesis (I am not convinced that all the theologians and biblical scholars he claims as allies do hold the same position), he demonstrates a clear theological dualism which leads him, in my opinion, into a number of contradictory positions. He appears to accept a radical distinction between nature and grace, which leaves him with no alternative but to reject all use of political power (arche) in the human sphere as having nothing to do with the reality of God’s kingdom. Many unfortunate consequences flow from this radical disassociation; I will mention two. The first is that he has little theological advice to offer ordinary Christian people seeking to bear a faithful testimony to Jesus Christ in the cut and thrust of political life; ‘when doing theology one must speak of God; when doing politics one must notspeak of God’ (p. 183). The second is that he succumbs to the illusion that anyone (particularly a Christian) is able to abstract themselves from responsibility for the kind of power being exercised in a given place at a given time. A world-denying creed (which is what he explicitly claims for Christ in his encounter with Pilate) cannot pretend to be neutral between different ways of holding political power. It is, by definition, reactionary. Of course, by no means all political activity engaged in by Christians is truly liberating. But I would strongly maintain that we can distinguish, on the basis of some continuity between the kingdoms of this world and the kingdom of the Messiah, what is more or less liberating in terms of human beings living together in community. Eller, too, seems to believe that relative distinctions can and should be made. However, though his theology of Christian anarchy warns against the dangers and pitfalls of confusing political crusades with the one and only cause of God, it does not help us to discern how concretely God’s good gifts may be exercised faithfully in the real world of power. Could it be that Eller confuses anarchy (the rejection of manipulative power) with nihilism (the rejection of political authority as such)?

Andrew Kirk is Dean and Head of the Department of Mission in the Selly Oak Colleges, Birmingham UK.