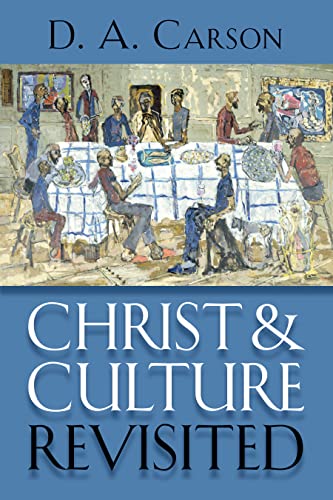 Written by D. A. Carson Reviewed By Ted Newell
Mission and Culture

The author or editor of more than fifty commentaries, books on hermeneutics, or exegesis and theological studies, D. A. Carson here critiques H. Richard Niebuhr’s 1953 Christ and Culture, in print and still cited after more than fifty years. Niebuhr listed five paradigms or traditions of Christian approaches to culture. Carson suggests a fuller approach.

Christ and Culture Revisited’s first two chapters are from presentations at a conference at Vaux sur Seine, France; Chapter 3 is in question-and-answer format, expanding or clarifying those foundational chapters. Carson deflates the idea that Christianity’s relation to culture can be reduced to a choice among five scriptural-doctrinal-historical complexes: Christ against culture, Christ of culture, Christ above culture, Christ and culture in paradox, or Christ transforming culture. Niebuhr’s problem is, first, definitional: he makes an either-or dualism, “Christ” and all other “authority divested of Christ.” But Christ cannot be separated from culture, a state of affairs most clear in the ultimate type where Christ is able to transform culture. Carson says, “If we do not recognize … the polarities that Niebuhr sets up … his elegant discussion … becomes incoherent” (p. 12). Secondly, not all of the types are genuinely Christian. Niebuhr’s second type, “Christ of culture,” credits expressions of Christianity that were once influential but are discredited; for example, while he excludes groups with their own special revelations claiming to be Christian, he includes Gnostics and liberals. Carson notes that Gnosticism was never genuine Christianity, and the same applies to liberalism. Since neither can be said to be biblically supported, the second type is invalid (pp. 10, 16–19, 33–35). Thirdly, Niebuhr’s exegesis is partial: for example, he uses John’s Gospel to support his Transforming type as universalistic but neglects the gospel’s particularism (pp. 36–39). Fourthly, Niebuhr thinks the canon includes dissonant theologies, but a strong case can be made that Scripture read sympathetically is harmonious (pp. 40–43). Fifthly, Niebuhr uses historical figures to exemplify each type, but often these figures could be also placed under another type. His handling of history is excessively stylized and unpersuasive (pp. 39–49, 61). Carson does not accept Niebuhr’s (muted) relativism and disavows the legitimacy of the types. The types are aspects of the whole truth: “Is it possible that a merging of patterns sometimes brings greater fidelity to the biblical revelation than adopting any of the patterns in its purest form?” (pp. 40, 60). Carson believes that there is a narrower range of biblically sustainable options, and though he does not say so specifically, he likely thinks that the fundamentalist Christ against culture mistakes the fullness of the biblical witness, as does the Lutheran Christ and culture in paradox. Not a typology but biblical theology and its “great turning points” must govern a Christian response to culture.

Chapter 3 ends with a fifteen-page response to J. K. A. Smith’s criticism of Carson’s Becoming Conversant with the Emerging Church. The section shows the intricacy of a Christian engagement with (the cultural phenomenon of) postmodernism. Carson reiterates his appreciation for a soft postmodernism or perspectivalism that apprehends the possibility of Truth. The argument is careful and generous at points, and Carson prefaces the pages by saying that “those uninterested in debates over epistemology, postmodernism, and faith may safely skip to the next chapter” (p. 99). However, he is trenchant enough that the impression of a grudge match is unavoidable.

Chapter 4 turns to the possible goods and evils of secularism, democracy, freedom and power. Chapter 5 is a synoptic view of church and state, commencing with careful definition of terms. As Carson notes later, “debates about church and state are subsets of more comprehensive debates about Christ and culture (p. 145). The two chapters show that cultural analysis is much more than the choice of a Niebuhrian type. But reductionism is also possible in a redrawn set of types: Carson exposes Craig Carter’s revised typology in Rethinking Christ and Culture (2007) as pivoted on the single axis of pacifism (pp. 218–22). Chapter 6 summarizes the book.

Christ and Culture Revisited is not a comprehensive treatise. It seems right that biblical theology “tends to safeguard Christians against the most egregious reductionisms” (82). It is not true that the author misses whole arenas of human activity or makes Christian cultural activity to be “churchy,” as J. K. A. Smith suggested in a review (J. K. A. Smith, “Thinking Biblically about Culture,” Perspectives: A Journal of Reformed Thought[February 2009]). Carson is concerned with social structures (pp. 48, 82, 218) under the biblical category of the Fall rather than Creation. He does not, however, show how the great biblical turning points may be used to instruct faithful Christians in a given area of culture. Albert Wolters, whose Creation Regained Carson cites, uses the turning points of Creation, Fall, and Redemption to outline a diagnostic scheme in which a creational structure, say, marriage, may be analyzed as moving in fallen or redemptive directions. The Christian task is discernment of creational good in either fallen or redemptive expression. Carson’s proposal needs to be developed.

Carson’s analyses of postmodernism, secularity, freedom, and the others go beyond biblical theology to draw on systematic theology. I noted use of doctrines of theological anthropology (p. 64), revelation (p. 86), epistemology (pp. 99–114), sin (p. 60), atonement (p. 55), eschatology (pp. 53–54), common grace (p. 61), and close by, a theology of religions (pp. 11–12). As Carson writes political and epistemological analyses, he is working from specific biblical and theological understandings, doing no more or less than Christians have done to relate their faith to the world since Paul at Mars Hill (Acts 17). Most broadly, any proposal to relate Christianity to culture is coherent within its biblical-systematic-historical-linguistic framework. As one picks up Carson, Craig Carter, D. Stephen Long (cf. the review of Long’s Theology and Culture in the previous Themelios issue), or any evangelical, mainstream, Catholic, or Orthodox proposals, one ought to look for the confessional commitments that sponsor it. Christ-and-culture reflection is not neutral or applicable across all schools of thought but arises from a matrix of biblical and systematic-theological commitments inevitably coloured, but not thereby negated, by the writer’s location in place and time. Carson’s significant advocacy in this book is that Christians must not accept relativizations or reductionisms but turn first to the biblical witness for a genuinely Christian response to culture.