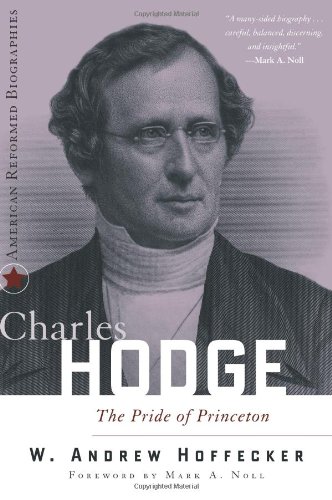 Charles Hodge: The Pride of Princeton

As recently as 2010, the reader who wished to know more than the basic outline of the life and influence of Charles Hodge (1797–1878), the Princeton theologian and author of the famed three-volume Systematic Theology, had few options. Of course, there was the massive Life of Charles Hodge (1881) produced by his son A. A. Hodge in the aftermath of his father’s passing. Nearer to us in time, two chapters in the anthology Reformed Theology in America (1989) focused upon “The Princeton Theology” and on “Charles Hodge,” respectively. Tremors, indicating an upsurge of more specialized academic interest, were spread by the more recent anthology volume Charles Hodge Revisited (2002). But I have alluded to 2010; since then two notable and sizeable biographies of Hodge have appeared: Paul Gutjahr’s in 2011 (reviewed in Themelios 36 [2011]: 525–26) and Hoffecker’s later in 2011.

One need not, however, think of this surge of research on Hodge—spread especially over the last decade—as constituting a glut. For on closer examination, the two recent biographies, while each the product of massive and extended research, occupy quite distinct ground. The Gutjahr volume might fairly be considered intellectual biography, focusing as it does upon Hodge as a man of his age and as a man of letters. Hodge’s theological views were not unimportant to Gutjahr, but were at the same time given a place not surpassing that of the Princeton theologian’s literary interactions with his counterparts in New England and in Germany. Hoffecker’s work, while not disinterested in the intellectual development of Hodge (indeed, it pays close attention to his early education, the father-mentor role of Archibald Alexander towards him, and the importance of his study in France and Germany) is supremely focused upon the growth of his theological thought and his posture towards the heated questions of his own age. In this latter respect, Hoffecker’s work rather more resembles the original biography of 1881, while in important respects moving beyond it.

Hoffecker adeptly shows (in chs. 8–13) that Hodge, already a lecturer in biblical languages and literature at Princeton from 1820, was motivated to go to Paris, Halle, and Berlin for further studies in biblical and European languages because of a sense that American theological education (and by extension his own preparation to teach) was not “at par” with European counterparts. This sojourn, lasting from October 1826 until summer 1828, had far-reaching effects for Hodge and for the seminary. Especially in his subsequent taking up the teaching of theology (he had begun in biblical languages and literature), Hodge was decidedly abreast of the “names” and currents in European theology—a facility on display in his eventual Systematic Theology. It is fair to say that the European sojourn gave to Hodge an ability to gauge European theological trends as they made their way (through publication and immigration) to America. Hodge’s ongoing correspondence with Continental friends made in the 1820s—both in France and Germany—would prove significant in connection with American missionary endeavor in Europe and for the sake of securing holdings for the Princeton library.

Hoffecker treats at length Hodge’s literary role in the heated contest between Old and New School Presbyterians, culminating in 1837 (chs. 14–21). We see Hodge in this setting as a moderating literary voice: he is concerned about the potential for harm in tendencies at work in the New School (the love for voluntary agencies, a perceived slackening of concern for theological orthodoxy), yet he is also concerned about the ferocity and readiness for desperate measures on the part of an “ultra” party of Old Schoolers as they worked to force the excision of their opponents. In this connection, Hoffecker offers an especially sensitive depiction of the partial estrangement that entered the relationship between Hodge and his now-elderly mentor, Archibald Alexander, as the release of the younger man’s Constitutional History of the Presbyterian Church (1851) served to vindicate the Old School party against their New School counterparts. Hodge achieved this literary purpose by depicting his Old School as the continuation of the emphases of the “Old Light” movement of the preceding century, a movement characterized by wariness towards the Great Awakening. It was Alexander’s view that Princeton stood so directly in the lineage of the “New Light” (Awakening-friendly) party of the preceding century, that Hodge’s depiction disappointed him. One is left to wonder, as Hoffecker skillfully untangles the threads of this period, how much Hodge’s desire to vindicate the current Old School party (which he had originally supported with some reluctance) did not move him to “tilt” his analysis of the Awakening period from what it might have yielded in more pacific times.

There are further, excellent examples of Hoffecker’s work as a historical theologian. Among these is his treatment of Hodge’s literary exchanges with Horace Bushnell of New Haven (ch. 17), carried on in the pages of the Princeton Review over the question of the nurture of the children of Christian believers; Bushnell had published his influential Christian Nurture in 1847. Hodge parted ways with Bushnell not over the importance of nurture for the children of believers, but over the question of whether the Holy Spirit’s work in regeneration was confined to it. Notable as well is the treatment (ch. 18) of Hodge’s gradual and almost imperceptible shift from holding that slavery was permissible but best gradually ended to holding that it was an evil thing for a Christian to perpetuate it since it involved the division of families, the denial of education, and the hindering of the evangelization of those subject to it.

Hoffecker is also in fine form in detailing (ch. 25) the controversial literary relationship that existed between Hodge and his onetime substitute (during his 1820s sojourn in Europe), John W. Nevin. Hoffecker is not afraid to show that Nevin, of Mercersburg Seminary, understood John Calvin’s sacramental theology better than did Hodge and that the latter, at times, unfairly disparaged Nevin’s position by attributing to him views that he did not in fact endorse. Here one observes that Hoffecker is certainly in no bondage to Hodge’s first biographer.

For this reviewer, there is a special sense of gratitude to Hoffecker for his chapter 33 in which the aged Charles Hodge is shown to have thrown his heart and soul into the cause of the Evangelical Alliance (founded 1846). When that Alliance convened in New York City in 1873 after earlier gatherings in five European cities, Hodge gave an impassioned address on “Christian Union,” in which he emphasized the spiritual unity—already in existence, yet under-recognized—of evangelical believers in all communions. If the reader should think (as did some who listened) that such notions seemed strange springing from the lips of one who seemed to epitomize Old School Presbyterianism and its theology, Hoffecker reminds us that Hodge had been writing with the evangelical family in view as early as his engaging manual of instruction for believers, The Way of Life (1841).

We should be grateful that 2011 brought us such a bumper crop on Hodge. Many of us will do well to read but one Hodge biography; if that must be, let it be Hoffecker’s Hodge: Pride of Princeton. Here is a man in whom were united deep piety and doctrinal conviction.