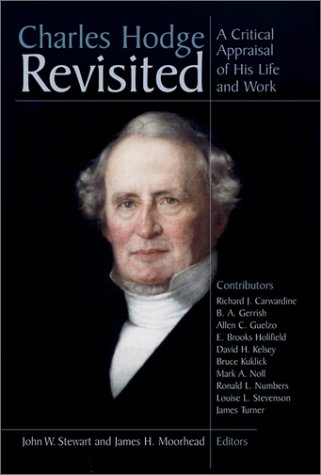 CHARLES HODGE REVISITED: A CRITICAL APPRAISAL OF HIS LIFE AND WORK

John Stewart points out in his introductory essay to this volume that, although there is a growing literature on the thought and work of Charles Hodge, there is nothing like the systematic treatment of his work that has been accorded to other nineteenth century figures of comparable intellectual stature, such as Ralph Emerson, Charles Finney or Horace Bushnell. And, to date, no critical biography either. For these reasons this symposium is a welcome addition to the work being done on Hodge. In this volume there are essays from leading historians of American history and thought which cover a range of important issues in the study of Hodge’s work. Bruce Kuklick writes on the place of Hodge in the history of ideas in America. Ronald Numbers deals with Hodge’s relation to the natural sciences and Darwinism. Mark Noll treats Hodge’s views on the spiritual life and David Kelsey tackles Hodge on Scripture and hermeneutics. These are just some of the highlights of a very readable and informative collection of essays.

Hodge emerges from these pages as a figure of considerable importance in the exposition of Princetonian Calvinism, and as a bulwark against the encroaching tides (as he saw it) of Darwinism and German romanticism in theology. His treatment of the philosophical influence of Scottish common sense realism on Hodge’s theology, derived for Thomas Reid and his disciples like James McCosh at Princeton College is also of interest. Hodge’s debt to this Scottish philosophy and the influence on him of his time in Germany are both dealt with critically, but sympathetically. Both issues are brought to bear on his doctrine of the inspiration of Scripture.

It could be said that Hodge was both a great systematiser of the faith and, towards the end of his life, a victim of his own success. His commitment to commonsense realism, the view that we simply know there is a world outside our minds which is real, meant that the philosophical roots of his dogmatics were vulnerable to changes in the intellectual climate at the end of the nineteenth century. His sojourn in Hallé and Berlin universities equipped him with theological and linguistic tools which made him the envy of other, comparable north American theologians of the period. Yet his interests in Germanic theology were, it is argued, largely (though not exclusively) in terms of finding theologians in sympathy with his own confessionalism.

Inevitably, with a figure whose life spanned the upheavals of the American Civil War, there are aspects of Hodge’s life and work that appear alien to modern ears, for instance, his defence of slavery as an institution. (Sadly, he was not alone in this advocacy amongst nineteenth century American Presbyterians.) On a different issue, Louise L. Stevenson’s essay on Hodge’s strong patriarchal view of the place of men and women in society makes sober reading. These essays invite greater reflection on how much of Hodges’s theological legacy betrays this particular historical context, and how much remains serviceable in our society today.

There is a large, although as yet incomplete, bibliography of Hodge’s works and key secondary material at the end of this book. This is a valuable resource for the scholar and interested reader. There is, however, no index, which is a great shame. Such a useful work would have been better served with a great facility for reference.