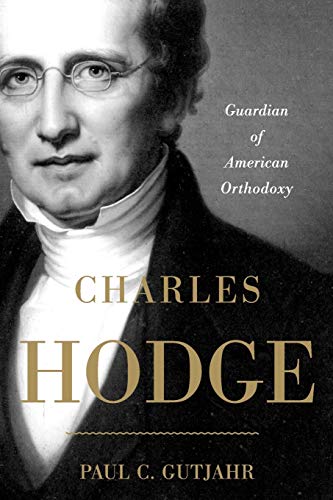 It has been fashionable for so long for modern writers to portray Charles Hodge (1797-1878) as an antediluvian in theology, hopelessly wedded to the Scottish Common Sense view of the world, tethered to the theology of the Genevan Francis Turretin (1623-1687), and source of the protestation that Princeton Seminary had never had a novel idea, that the prospect of a new Hodge biography raised for this reader the sense that this iconic theologian would now take even more “lumps.” But happily, such expectations were disappointed.

Gutjahr, associate professor of English and American Studies at Indiana University, spent a long decade with the writings, papers, and correspondence of Hodge, professor at Princeton Seminary from 1822 until his death. Gutjahr has given us a critical and yet deeply sympathetic biography that will finally displace the well-loved but dated Life of Charles Hodge produced in 1880 by his oldest son, A.A. Hodge. That biography has been kept constantly in print across recent decades (the latest reprint appeared in 2010).This fact, rather than discouraging Gutjahr, must surely have encouraged him to believe that there is a potential readership that would take up his attempt at a biography as they had and have that of Charles Hodge's oldest son.

I am certain that the earlier biographer understood the nuances of his father's theological position better than has his modern counterpart. Yet I am just as certain that Gutjahr has depicted the Princeton theologian in his nineteenth-century historical, social, and theological context in a way superior to that of A. A. Hodge's Life. It could hardly be otherwise. Hodge the younger was himself a theologian of renown and his father's successor at Princeton; as an “insider” he would have a privileged understanding of his father's theological thought not available to others. Yet the dust of the theological controversies and sectional tensions of the nineteenth century had not settled at the time of Hodge's passing in 1878, and thus his son, writing in the immediate aftermath of this bereavement, cannot have been expected to interpret the scene before him in a definitive way. The Old School-New School Presbyterian division of 1837 and eventual reunion of 1869, the pre-Civil War agitation over proposals for the abolition of slavery, the bloody Civil War era, and the rise of Darwinism were all issues still needing more time to yield their meaning at Hodge's 1878 passing. There was certainly more sifting to be done in due course.

And yet, having credited Hodge's first biographer with superior theological insight, it is necessary to say that the one who reads Gutjahr's account of Hodge's 1823-24 study at Paris, Halle, and Berlin (chs. 17-19) as laying the foundation of Hodge's subsequent masterful grasp of European theological trends, or his controversies with the New England Transcendentalists (ch. 36) or with the theologians of Yale and Andover (ch. 38) will understand and appreciate the skill that Gutjahr—considered an intellectual historian—has brought to his task. These chapters wonderfully illuminate aspects of Hodge's career that have required further explication.

In many respects, this new biography forces a change in perceptions of Hodge I had long held. It is widely known that Hodge could find no biblical prohibition against slave-owning; he kept domestic slaves himself in the pre-Civil War period. But Gutjahr shows that Hodge, a man who disliked change, gradually grew in an ability to distinguish between the kind of paternalistic domestic slavery he himself had practiced (he had after all encouraged literacy and church-going for his slaves) and the system of slavery practiced in the cotton states that positively oppressed slaves and positively hindered their preparation for eventual emancipation. Thus, Hodge overcame his earlier diffidence and supported Lincoln's Emancipation Proclamation in 1862. Again, it is widely known that Hodge disapproved of theological trends at work amongst New School Presbyterians in the years leading up to the 1837 expulsion of this body from the Presbyterian General Assembly. But Gutjahr shows us that Hodge not only opposed the methods used by the Old School to secure this expulsion, but forewarned Old School leaders that these methods would certainly lead to calamity (which they did). Finally, though we all know about the predictable conservativism of the Princetonians, we can stand amazed at the fact that a primary motive for the founding of a second Presbyterian seminary at Allegheny, Pennsylvaniawas the dissatisfaction of Old School conservatives with the peace-loving moderation of the Princetonians. Hodge called those to his theological right the “Ultras.” Gutjahr thus highlights the complexities of Hodge's career.

There are also surprises in Gutjahr's account. The primary reason for the long delay in the release of Hodge's three-volume Systematic Theology until 1872? The directors of the seminary had earlier feared that Hodge's lectures, if available in print, would take away a strong incentive for students to enroll at Princeton to hear Hodge lecture! He was the seminary's “marquee player.” Hodge's celebrated writings on Darwinism, far from being written in the immediate aftermath of the 1859 release of Darwin's Origin of Species were actually composed after the completion of the Systematic Theology, with Hodge in his mid-seventies. No resting on his oars for the aged Hodge!

In a concluding epilogue, Gutjahr explores the prickly subject of the Hodge legacy. He notes the Princeton tendency to rely on family dynasties (the Hodges were not alone in this respect; the Alexanders had earlier beaten the path). He notes that following the reunion of Old and New School Presbyterians in 1869, Hodge and Princeton had gradually grown estranged after well-intentioned efforts to co-publish a journal in tandem with Union Seminary, New York. He portrays Princeton at the “fin de siècle” as increasingly isolated in its theology—all the while still known for its very considerable rigor. As portrayed, the eventual division at Princeton Seminary in 1929 is the predictable outcome of a seminary that in resisting the theological trends of its age made itself vulnerable to forced reorganization by its parent denomination, which, in spite of Princeton, reflected those very trends.

Read Paul Gutjahr's portrait of Hodge! It is massively researched, yet stirring reading. It is empathetic towards its subject, yet never cloying. If not a theological history, it is an intellectual history. May it lead to fresh attention to this great theologian of the nineteenth century and his many writings, more of which should still be in print.