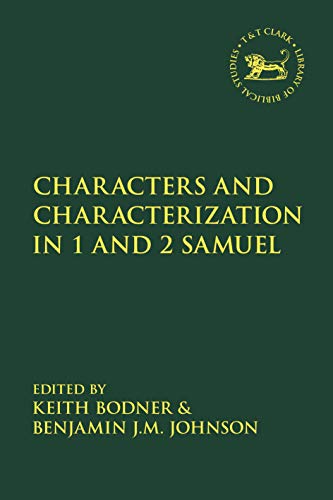 Characters and Characterization in the Book of Samuel

This book is a collection of recent studies on characters and characterization in the book of Samuel. Seventeen biblical scholars delve into mechanisms deployed by the biblical narrator to provide literary, theological, or sociological perspectives. Contributors cast light on individual characters in a variety of ways. Some read with the grain of the text and others against it, some intentionally narrow their focus on a particular episode or on a particular aspect relating to their character(s), while others try to incorporate every aspect and episode. Some survey various scholarly opinions while others present their analysis with minimum scholarly debate. All this confirms the experimental and heuristic atmosphere encouraged by the editors, who say in the preface that this book not only collates recent studies but also suggests “other ways that the study of character might move forward” (p. xii).

Benjamin J. M. Johnson sets the tone of the book by emphasizing the complexity and ambiguity of the characters in the book of Samuel (Chapter 1). His thesis that the assessment of a character is contingent on that of other characters is well argued through his exposition of two pericopes involving two-character triangles (David, Nabal, and Abigail in 1 Sam 25, and David, Joab, and Abner in 2 Sam 3). J. P. Fokkelman, also by way of general introduction, demonstrates the structural coherence of the Samuel composition in which all the characters live, move, and have their being (ch. 2). The first character dealt with in this book is God (ch. 3). It is understandable considering God’s unique place in the discussion of characters in the book of Samuel. According to Stephen B. Chapman, God is both like and unlike human characters. Although he functions as one character among others, he also shows himself in the narrator and through other human characters (double causality). Against Steussy’s characterization of God as “inscrutable and dangerous” (p. 30), Chapman sees God characterized as worthy of thanks and praise, because he is presented in Samuel as a deliverer of Israel, even willing to contradict himself in order “to adopt the best course of action for Israel’s well-being” (p. 40).

Subsequent articles discuss human characters in the order of their appearance in the book of Samuel. Jenni Williams warns of reading Hannah as merely a type, whether literary, theological, or sociological, and encourages paying close attention to the language of the text and reading “Hannah simply for Hannah” (ch. 4, p. 53). What emerges out of Williams’s discussion is a deeply troubled Hannah, victimized but refusing to remain so, and acting decisively with faith in the Lord. Eli, according to Marvin A. Sweeney, is characterized negatively as an incompetent father and priest as a way of justifying the removal of his family from the high priesthood at the time of Solomon (ch. 5). J. Richard Middleton discusses how Samuel is portrayed in his farewell speech in 1 Samuel 12. Samuel’s speech is couched in standard covenantal categories and has, Midddleton argues, an illocutionary effect of warning about monarchy. His speech also guarantees his continuing influence over the people (ch. 6). Paul S. Evans identifies one psychological factor that may account for both positive and negative aspects of Saul’s characterization—his low self-esteem. It initially makes him a humble and likable character but eventually leads to his insecurity and addiction to superstitious rituals, which results in his defiance of God’s word delivered through prophet Samuel (ch. 7). Keith Bodner and Benjamin J. M. Johnson survey various scholarly approaches to David’s characterization (ch. 8). They compare the biblical portrayal of David to a kaleidoscope that changes meaning depending on how the reader holds the hermeneutical lens. David means many things to different readers, from a wicked human being (modern historical critics) to an exemplar of repentance (post-exilic Jews). Diana Abernethy discerns in the positive characterization of Jonathan in 1 Samuel 13–14 the theology of divine election (ch. 9). David, not Jonathan, ends up succeeding Saul, she argues, because the Lord has rejected Saul and chosen David, not because David is a better person.

Jonathan Jacobs compares Jonathan and Michal in order to discern how they define each other, beyond just casting light on the main character, David (ch. 10). For all the similarities between the two character’s attitudes to endangered David, Jacobs argues, Michal’s undivided loyalty to David is distinguished from Jonathan’s double loyalty to David and to Saul. Philip F. Esler uses the ancient convention of “challenge and response” to describe Abigail as a wise and courageous woman who replaces her husband in the traditionally male role of meeting an outsider’s challenge (ch. 11). Barbara Green attempts to make sense of Joab’s inconsistent actions toward David (ch. 12). If one assumes that Joab had ambitions for the throne, the following pattern emerges: Joab works with David as a competent fighter and talker but whenever his own future is at stake, he jeopardizes and even abandons his obligations to David. David Shepherd narrows his focus on one aspect of Abner’s characterization: his knowledge (ch. 13). Whenever Abner claims his ignorance, Shepherd argues, he fakes it for a purpose. For instance, when he pretends not to know David’s identity (1 Sam 17:55), he intends to get Saul to engage with David directly. Michael Avioz uses the name of Ishbosheth “a man of shame” as an interpretive lens through which to analyze the king’s characterization as a worthless, ridiculed king (ch. 14). David G. Firth applies techniques of characterization deployed in classical sources to his analysis of three foreigners in David’s court (ch. 15). David’s interactions with Uriah, Ittai, and Hushai enable the reader to reach a deeper understanding of Israel’s king. While Uriah the Hittite is a reminder of the depth of David’s sin, the possibilities of his restoration are made clear through Ittai the Philistine and Hushai the Canaanite. Yairah Amit reads against the grain of the text and portrays Absalom not as someone who acts out of greed for power, but as someone who acts out of a passion for justice (ch. 16). James E. Patrick rearranges the episodes relating to Nathan in 2 Samuel 7–24 and 1 Kings 1–2 according to historical chronology before examining Nathan’s character (ch. 17).

One need not agree on every point made in this collection of articles to appreciate the depth and variety of the literary studies on characters and characterization in the book of Samuel. It is not only a feast for those readers interested in the literary artifice of the book of Samuel but also a substantial contribution to character studies in biblical literature.