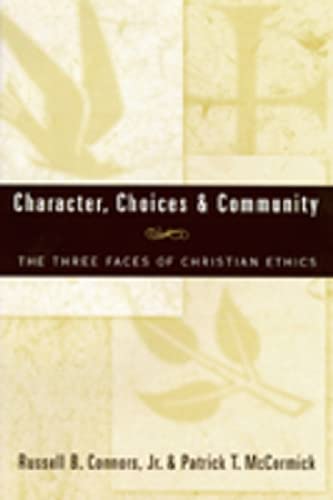 Character, Choices and Community. The Three Faces of Christian Ethics

The authors’ intention is to provide an introductory ‘overview of the fundamental elements and themes of the moral life generally and Christian morality specifically’.

Opening with a chapter entitled ‘Experience: Morality’s Starting Point’, this is an account of ethics that leads with the epistemological question. As a theological ethics one might want to start elsewhere but this approach does strike the reader as in line with intuitive feelings about moral learning. Coupled with the ‘case study’ examples that begin and run through each chapter and the closing ‘Questions for Discussion’ this makes for a beginner friendly book.

The next three chapters set out the shape of the moral life as the authors see it, viz., eponymously: Character, Choices for action and Community. This triadic conception pervades the ensuing discussions dealing with the oft-neglected subjects of conscience and conscience formation, as well as moral norms, moral reasoning, sin and morality, and Christian moral conversion.

Whilst eschewing philosophical jargon the authors nevertheless struggle, in the context, to set out the nuances of Roman Catholic understanding of the moral life, with such concepts as ‘pre-moral values’ and the teachings on ‘mortal’ and ‘venial’ sin. Whilst the integrity of their approach is not to be doubted the weightier close of the book does not sit so comfortably with the gentle yet helpful beginning.

The most striking omission in the authors’ approach to Christian ethics is instanced in their characterisation of eight Biblical themes of use for ethics: Creation, Sin, Covenant, Incarnation, Death and Resurrection, Love of Neighbour, Reign of God. Whilst it is encouraging to read a book on ethics which takes sin seriously, the authors find no room for Eschatology in their list, an omission impacting not least on their pervasive discussion of ‘social sin’ and their reference to ‘liberationist’ theologies. Is it more confusing than helpful to write of communities being ‘born again’? The evangelical basis for some good observations is not as clear as one would have hoped.

The book deserves consideration, not least in that it might cause some evangelical Protestant students to consider how and when it might be appropriate to engage their imaginations as they seek Christian responses to ethical questions under the ultimate authority of Scripture—without succumbing to Biblicism and proof-texting which the authors rightly criticise. If sometimes the terms of debate are uncomfortably alien, students would be rewarded by not dismissing talk of, say, tradition or co-operating with grace, too quickly, lest they belie their own blindness to the multifaceted formation of their conscience and character.

In presenting a current of Catholic thought influenced by the narrative school this book is useful; also for its treatment of the Bible and ethics, character and conscience and Catholic teaching on sin and imagination—although at times the emphasis seems skewed toward the subjective side of moral issues. Students who have come across ‘narrative theology’ will need to note and carefully evaluate the work done by this approach in the whole book, with central chapters on ‘Morality and Stories’ and ‘Christian Stories and Christian Morality’. Need we agree that it is a ‘fact that human experience is primarily narrative in character’? Frustrating for the student is the absence of an index or bibliography, and endnotes rather than footnotes—and not all will forgive the citing of ‘Amazing Grace’ as an ‘American folk spiritual’!