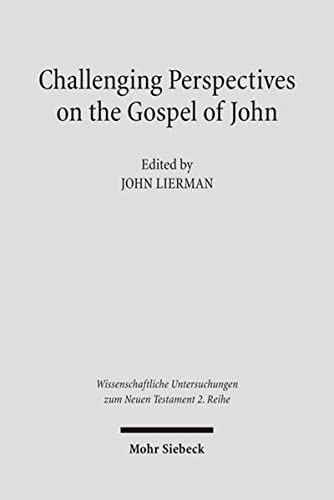 Challenging Perspectives on the Gospel of John

This book is a collection of twelve essays on the Gospel of John, originally presented as papers at the 2002 New Testament study group of the Tyndale Fellowship in Cambridge. Besides David Wenham’s introductory essay that refers to the questions related to the historical tradition in John and to the context in which John’s tradition originated, there are several particular contributions in the essays contained in this book. For example, they show the following:

Various issues emerge from the reading of this book:

An examination of Daniel 9:25, which refers to the coming of ‘an anointed one, a prince’ (Dan 9:25 lxx), would have further supported Bauckham’s study of the belief on the Messiah in the pre-70 Judaism. Köstenberger’s study, which seeks to interpret John’s Gospel against the background of the Second Temple Judaism, has not probed into such key motifs as glory, sacrifice, seeing God, and communion with God—all integrally related to the Temple theme. The Merkabah mystical background of the Fourth Gospel and the implied polemic in John against the Jewish mystics of that time can hardly be ignored in a study on John and the Second Temple Judaism. The study of John Lierman also fails to identify the Merkabah mysticism practised in the first and late second centuries as the probable background against which Jesus’ kingship in John can better be understood.

The parallelism drawn by Andrew Gregory between Luke 24:12 and John 20:3–10 is not convincing enough to argue for Luke’s literary dependence on John. The limited parallels shown do not necessarily imply that one used the other. In this study, John 8:1–11, which contains several Lukan languages, goes unnoticed.

Gary Burge, in his essay, seems to read from the Spirit-Paraclete passages more than what the text itself says. In spite of the fact that the Spirit will declare what he hears from the Father and the Son from whom he proceeds and by taking what is Christ’s, Burge maintains that the Spirit will open up ‘new truths not seen before’. John does not seem to present the Spirit mainly as the aide who will bring clarity to incomprehension, but as the parakletos who will transform human life and who will lead the disciples by teaching and guiding. It is Jesus’ glorification on the cross, and not the ‘new comprehension’ by the Spirit, which is the focal point in John.

Gabi Renz’s study allows both the positive and negative readings of Nicodemus narrative in John with the note that both readings do ‘persuade the audience to become devoted disciples of Christ’. However, her study begs the questions: would John have left his audience to be so ambiguous that they could not grasp his mind correctly? Would this ambiguity not encourage a non-believing recipient to choose to be a mere sympathizer, rather than to become a devoted disciple, of Jesus and a believing recipient to be content with living in two worlds at the same time?

In sum, the book has drawn our attention to important themes that are in current research and has made an impressive contribution to Johannine study. But at the same time it raises several issues that certainly lead us to study further on the themes accommodated in this book.

is the Professor of New Testament at Union Biblical Seminary, Pune.