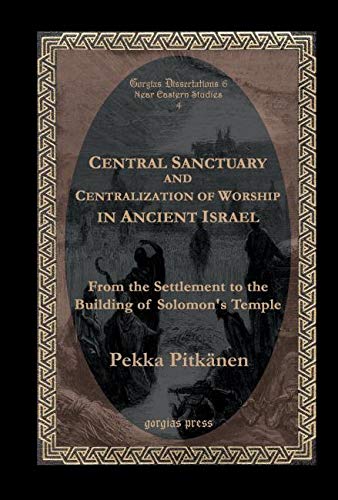 CENTRAL SANCTUARY AND CENTRALISATION OF WORSHIP IN ANCIENT ISRAEL: FROM THE SETTLEMENT TO THE BUILDING OF SOLOMON’S TEMPLE, GORGIAS DISSERTATIONS NEAR EASTERN STUDIES 5

In his revised dissertation, Pekka Pitkänen examines the issue of the centralisation of worship in Israelite experience and theology from the Levitical ideal through the era of the tribal league, concluding with statements regarding centralisation in the days of Solomon. His goal is to contribute to a new paradigm of interpretation for this critical topic.

In chapter one, Pitkänen addresses the motivation for his study: ‘previous approaches which have more or less challenged the Wellhausenian consensus … are few and far between and mostly limited in scope’ (12–13). In chapter two, Pitkänen reviews the ANE relationship between a deity, its image, and its temple, and proposes that in Israel’s analogous experience local sanctuaries might co-exist with the central sanctuary. In chapters three and four, he investigates biblical pericopes critical to the discussion through the lenses of literary analysis, historical criticism, biblical theology, and, at times, archeology. His chosen passages are quite substantial: Leviticus 17:1–15; Jeremiah 7:12–15 and 26:4–6, 9; Psalm 78:56–72; Deuteronomy 27:1–8; Joshua 8:30–35; 22:9–34 and Judges 17–21.

Pitkänen concludes that ‘the Priestly material’ demands centralisation in the wilderness, but not after (272); ‘Deuteronomy sees centralisation as an ideal, to be attained after settlement is complete and conditions are ideal’ (272); with the rejection of Shiloh, the old order of worship was abandoned (273); during the interlude between Shiloh and Solomon ‘there was no place where Yahweh’s name dwelt’ and although Solomon was commanded to centralise, he did not and ‘is explicitly criticised in this respect’ (275). Thus, ‘we may conclude that the history and theology of the centralisation of worship are compatible with each other … and this conclusion does not depend on the date and provenance of the biblical materials discussed’ (275). The author also concludes that Deuteronomy need not be dated to the seventh century bce, and advocates a pre-monarchic date (specifically, pre-Aphek [1 Samuel 4]) for Deuteronomy and Joshua and what he terms ‘the Priestly material’ from the Pentateuch.

Pitkänen has attempted a very ambitious project; a broad spectrum of topics are addressed and a great deal of research is represented. As might be anticipated by the scope of the study, however, many subjects are dealt with in a streamlined and uneven fashion. For example, Pitkänen’s outline of the ‘scholarly consensus’ regarding centralisation (1–24) substantively addresses only Wellhausen, allowing long quotations from Gordan Wenham to address the following one hundred years of scholarship. Moreover, his attempt to articulate a ‘general ancient Near Eastern conception of divine presence’ (25) is based upon a very selective review of ANE literature. His lack of engagement with the various reconstructions of the DH is evident throughout. Although marked by some compelling and creative insights, other lacuna such as a critical exegesis of Deuteronomy 12, a consistent treatment of the Deuteronomic idiom ‘the place I choose lesakkēn šemô šām’ (cf. 117–18, 123, 158, 258), and the presence of massēbôt in orthodox Israelite worship, detract from the volume’s persuasiveness.

The most difficult aspect of this book, however, is the author’s lack of clarity regarding whom he is in dialogue with and why. Although he states that he ‘will not assume Pentateuchal source division’ (16), he refers to and debates the delineation and dating of the Pentateuchal sources throughout the study. Although he often states that the historical provenance of his pericopes is inconsequential to his conclusions, much time is spent reporting and debating historical assessments of these same texts. Frequently the reader is told that the evidence just presented is ‘not all that important’ (109, 123). As a result, the reader is exposed to a great deal of unproductive discussion; convoluted argumentation and overly tentative conclusions leave the reader unsure of the author’s primary goals and confused as regards his developing thesis.

As regards his conclusions, a significant aspect of Pitkänen’s reassessment is his suggestion that centralised worship was not expected during ‘less than ideal conditions’ (i.e. times of military unrest or foreign oppression). This thesis prompts several difficult questions: what constitutes an era of foreign oppression, from which biblical book’s perspective might we define a period as such, and when and where was this ‘loop-hole’ communicated to the Israelites?

The central chapters are the strength of the book. In them Pitkänen discusses the biblical pericopes involving religious centralisation in ancient Israel. Here Central Sanctuary and Centralisation of Worship in Ancient Israel provides a very useful collection of primary and secondary literature regarding this important topic.