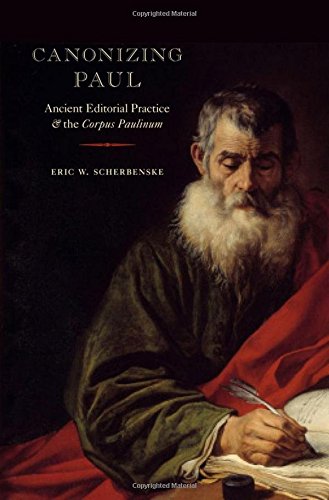 Once thought to be a dying discipline, NT textual criticism has experienced an unexpected revival in the last few decades. Into this lively atmosphere comes Eric Scherbenske’s published doctoral dissertation completed under the supervision of Bart Ehrman at the University of North Carolina at Chapel Hill.

Despite the title, the book has little to do with either the process or the results of canonization. The subtitle points to Scherbenske’s real interest which is to show that interpreting Paul’s letters and editing Paul’s letters were mutually influencing activities. For Scherbenske, “editing” includes everything from copying and correcting a text to the inclusion of introductory material, section headings, and even formatting. “Interpretation” includes both interpretations that influenced editors and interpretations that grow out of the resulting editions.

Scherbenske situates his work within two recent trends in the discipline: (1) the focus on variant readings as windows into the social world of Christianity and (2) the importance of the material aspects of manuscripts themselves (pp. 7–8). Unfortunately, the book never mentions the criticisms leveled against the first of these trends by Ulrich Schmid and others (see especially Textual Variation: Theological and Social Tendencies? ed. H. A. G. Houghton and D. C. Parker [Piscataway, NJ: Gorgias, 2008], pp. 3–8; 173–84). But, since most of the book covers the second of these trends (only ten points of variation are discussed in all), the effect is small.

After a brief introduction, the book unfolds in four chapters. Chapter one sets the discussion in the broader context of editing in antiquity. Scherbenske considers how the works of Homer and Hippocrates were edited and concludes that editors were comfortable with textual changes but within certain limits. He also explores how the unavoidable questions of authenticity were resolved and justified by editors who had to choose which books to include and exclude. The chapter concludes with discussions of “paratextual material” such as introductions, prefaces, section headings and the like.

The last three chapters comprise the meat of the book. Here we are given tours of three major editions of Paul’s letters: those of Marcion, Euthalius, and the Latin Vulgate. Marcion’s edition is the best known of these but also the least accessible, available only through patristic citations. We do know, however, that he placed Galatians first, excluded the Pastorals and Hebrews, wrote an accompanying tract (the Antitheses), and included his so-called prologues at the beginning of his Pauline corpus—all designed to lead the reader to Marcion’s interpretation.

Where the evidence for Marcion’s edition must often be pieced together from other sources, the Euthalian edition is extant in numerous Greek manuscripts. Scherbenske pays special attention to the earliest of these, the sixth century Codex Coislinianus (Gregory-Aland 015). Euthalius’s edition includes the typical 14 letters (the Pastorals and Hebrews included) and begins with Romans. It also includes a prologue, introductions to each letter, section headings, a list of citations, an account of Paul’s martyrdom, and a description of Paul’s travels. Most interesting is how the Euthalian material explains the order of Paul’s letters. Romans stands first, not because of length or theological depth, but rather because “it has been written for those beginning in reverence for God” (p. 127). The list of quotations, or “divine testimonies,” includes a unique cross-referencing system for OT quotations but surprisingly includes citations of extra-biblical material as well.

The final chapter shifts attention to the Latin Vulgate as represented in our earliest witness, the sixth century Codex Fuldensis. As with the Euthalian material, Scherbenske finds little editorializing in the text itself but does find it in the paratextual material. In Fuldensis, the editorial material has been culled from numerous sources, with some awkward results. For instance, the Primum Quaeritur, an introductory prologue found in many Vulgate manuscripts, mentions only the 10 Pauline letters found in Marcion’s edition, but the codex itself has the same fourteen letters found in the Euthalian edition plus the apocryphal letter to the Laodiceans. What’s more, the prologue explains Paul’s ten letters as Paul’s way of showing his continuity with the OT (Ten Commandments = ten letters). Other odd juxtapositions occur as well. The book closes with a short conclusion and appendix followed by endnotes, bibliography, and subject, name, and literature indexes.

A few concerns are worth mentioning. Scherbenske is generally careful to show where the evidence is too slim or unclear to allow conclusions. But in some cases, his desire to connect editorial practices and interpretation gets the better of him. In discussing the formatting of Codex Coislinianus, for example, he argues that the shorter-than-usual line lengths are the editor’s way of highlighting the virtues and vices in these passages (pp. 159–73). But Scherbenske overlooks 2 Cor 11:20 in Coislinianus, a text that lists Paul’s suffering with the same short line lengths. The simpler explanation is that these one- or two-word lines are due to the staccato syntax of these verses not their moral content. One can see the same pattern in Rom 8:35 in Codex Sinaiticus.

Scherbenske also suggests that there is a shift by the fourth century from controlling interpretation by changing the text itself to changing the paratextual material instead (pp. 229, 231, 236). Although he never tells us what caused this shift, this simplistic description obscures the fact that textual alteration occurred well after the fourth century (see Codex Bezae) and that textual transmission before then could be quite free from editorializing (see P75 and B).

Despite these concerns, Scherbenske has produced a well-researched volume. Particularly helpful is his survey of ancient editorial work in chapter one and his subsequent investigation of two fascinating codices. In this reviewer’s opinion, he has succeeded in his goal to stimulate “further exploration of the physical aspects of early Christian manuscripts both as material culture and as repositories of texts and interpretations ripe for social history” (p. 13).