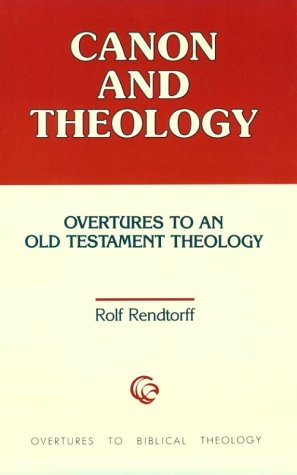 Canon and Theology: Overtures to an Old Testament Theology (Overtures to Biblical Theology)

This volume is a collection of 18 articles and papers given by the author since 1981, a number being quite recent and several appearing for the first time, or for the first time in English. The idea of canon is a uniting thread, and Rendtorff acknowledges a debt especially to B.S. Childs for influencing him away from traditional redaction criticism to a more explicit concern with the final form of the OT text. Some of the essays exemplify this concern in detailed treatments of biblical books. There are three chapters on aspects of the unity of Isaiah, for example (one newly published), which gives that book a certain prominence in the collection (fittingly, perhaps, as Childs’s treatment of Isaiah in his Introduction has often been singled out as a classic of his interpretation). This unity, of course, is not a unity of authorship; yet those who are conservative on Isaiah may still learn here. A chapter on the childhood of Samuel also comes in this category.

The reader will quickly discover, however, that there is more here than advocacy of a type of criticism. The real underlying concern is the relation of Christian interpretation to Jewish. The subtitle, then, ‘Overtures to an Old Testament Theology’, is meant to convey a problem, namely the problem inherent in the fact of the ‘Old Testament’ as Christian theology, in view of the claim of Judaism to possess the book also. In the light of that claim, even the name Old Testament is a problem. Rendtorff sees it as his task to try to find points of contact with Jewish scholars in interpreting the OT as part of a bigger programme of reconciliation and co-operation between church and synagogue. This he clearly sees as the contemporary theological challenge. In his final chapter, a personal reminiscence reviewing his 40 years at the university of Heidelberg in which he charts fashions in OT scholarship, he states his aim, in what remains of his life, ‘to help to free the Hebrew Bible from the captivity into which it was brought when it came to be labelled merely a preliminary step, now superseded and overcome, on the way to the Christian Bible’ (p. 218).

In the variety of essays here a number of key points recur: 1. The Church has no exclusive claim on the OT; 2. Modern Christian interpretation of the OT, since Wellhausen, has denigrated the post-exilic period and thus exhibited, if latently, a hostility to Judaism; 3. It has promoted unduly the role of OT prophecy as the key to the relationship between OT and NT, thus under-valuing the OT itself as a revelation of God.

These elements in the thesis have far-reaching consequences. In part they involve a recantation on Rendtorff’s part because of his association earlier in his career with Wolfhart Pannenberg and a group which emphasized the importance of history in revelation. Rendtorff now reflects on how essentially ‘Christian’ that view was, since it involved the proposition that the end of history was revealed in Christ—a proposition which is now inimical to his purpose. In an attempt to move away from the focus on covenant which typifies much Christian OT theology, he advocates, in an important chapter, greater prominence for the OT’s teaching on creation and the early chapters of the Bible. His interest here is especially in the promise to Noah (albeit a ‘covenant’), whose omission from the theologies of Zimmerli and Westermann he rightly laments. A focus here suggests ‘a world stabilized through God’s grace’, and calls to a concern, in the nuclear age, for the whole creation, lest in our day we obscure the ‘rainbow’. The essay thus incidentally shifts the balance in thinking about creation from ‘subduing the earth’, with the licence that it is sometimes heard to give for exploitation, to caring for it, in the light of possible judgment. The possibilities for bridge-building with Judaism are plain in the exploration of a topic such as this.

Rendtorff seems to hesitate, however, between thinking that the two religions inevitably do take different views of the OT and trying to show that the Christian emphasis on fulfilment is misguided (tending to the latter, for example, in his exposition of the new covenant in Jeremiah, where he emphasizes its continuity with the Mosaic covenant, and also argues that the NT appeal to it has significantly departed from the OT meaning).

The book is an attempt to move a number of mountains. On the one hand, Rendtorff has put himself in a minority as far as German critical scholarship goes because of his appeal to ‘canonical criticism’. He is a significant convert, by the same token, to the cause of that approach, now so widely espoused in the Anglo-Saxon world. He has apparently done it, however, in the name of a particular reading of the OT. Rendtorff is sure that the issue of Christian-Jewish dialogue on OT theology is the single most important issue in OT theology today.

It may be granted, however, that the issue of who ‘owns’ the OT is enduring and unavoidable in Christian theology, and this is no doubt highlighted when a ‘canonical criticism’ is adopted. The question remains, though, how far recognition of the Jewish claim should lead Christian interpretation. Rendtorff’s desire to ‘free’ the Hebrew Bible from its captivity to Christian interpretation has a certain validity as part of a hermeneutical endeavour; particular exegeses are always in principle liable to revision. But the deeper issue is a theological one. Rendtorff takes the view (not uniquely) that salvation comes differently to Jew and Christian. The motive is good, namely one of empathy for Jewish readers, together with revulsion at past Christian oppression. But the result of this desire to affirm, seen from a different point of view, is to negate, for it denies to the Jew the freedom to enter the church, and at the same time abdicates the Christian claim to universality implied in its Christology.

Curiously, there may be more common ground in theological interpretation than Rendtorff admits. The Jewish theologian-philosopher Martin Buber’s understanding of kingship, for example, strongly expresses the idea of a pressing forward towards an ideal not yet attained, a thought which Rendtorff fights shy of because of its supposedly Christian connotations. Other theological loci might also yield shared insights, within certain understood parameters. In the end, however, Christian and Jew are likely to respect each other best from a stand-point which recognizes the particularity of the other—a particularity, at least in the Christian case, which is the basis of a claim to universality.