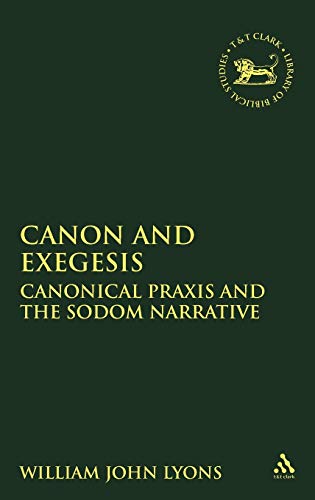 CANON AND EXEGESIS: CANONICAL PRAXIS AND THE SODOM NARRATIVE JSOTS 352

An important figure in OT studies over the past forty years has been Brevard Childs. His particular development of ‘canonical criticism’ has few followers, but many have been influenced by his constant stress that these ancient Near Eastern documents together form part of the Scripture of the Christian church. Lyons aims to give a critical account and defence of Childs’ approach, and then to illustrate its application to a specific text, for which he chooses Genesis 18–19.

It is not always easy to work out just what Childs thinks, and Lyons does a generally admirable job of disentangling the fundamental principles behind Childs’ presentation. Lyons defends the legitimacy of appealing to the ideas of ‘canon’ and the ‘canonical process’ by which it was formed, then asks what the exegetical implications might be. He finds in Childs ten resultant exegetical principles, ranging from the importance of ‘formal features’ of the canonical text in shaping how it should be read, to the fact that for Childs all Scripture witnesses truthfully to Christ. However in general Lyons seems happier with Childs’ more literary than his more theological considerations, so it is these that he primarily attempts to take forward.

Chapter 3 takes a slight detour to examine the philosophical underpinnings that a canonical method would require. The primary issue is whether there is objective meaning that belongs to the texts, or whether the perspective of the reader is more important. Lyons suggests the latter, appealing to the work of Stanley Fish. To my mind this was the least satisfactory part of the book: Lyons doesn’t give detailed arguments in support of Fish’s position, and my reading of Fish is that he is much more relativist than Lyons wishes to be. A Christian interpretation of Scripture requires more defence than ‘this is how my community interprets it, and that is all that matters’.

Chapters 4–6, forming over half the book, are a detailed exegesis of Genesis 18–19. Lyons’ main contention is that Abraham has neither a definite individualistic idea of justice (each person should suffer for their own deeds) nor a clear corporate conception (a community can suffer or be rewarded for the behavior of some of its members), and God simply accepts Abraham’s muddled requests. Amid much good discussion of the issues that the text raises, there is much more of Scripture where further lessons on the nature of justice are taught. I still think Abraham is consistent: his request is for the righteous not to lose their city and community because of the wicked, which explains both its individual and its corporate aspects. But I would have been interested to hear more about the ongoing process of teaching Israel about justice in the OT. Lyons also stresses that the text is less clear than we might like it to be about the importance of women: we are not told whether or not the women of Sodom were wicked, and Abraham’s intercession may be concerned only with righteous men.

Not much in the interpretation seems distinctively ‘canonical’. There is a stress on the final form of the text, but many scholars other than Childs have argued for the importance of this. There are some comments concerning how the text relates to the rest of Scripture, but the exegesis does not depend on these (see 272–73). It is probably a sign of a good method that it should often agree with others. Nevertheless, I was left wondering just what Lyons thinks is the particular contribution of Childs.

What is more, Lyons does not think he has found a neat method. Even in the conclusion he is still wrestling with such issues as just how much prior knowledge the reader should bring to the text, and exactly what it means to try to read the text as a coherent narrative. Here as throughout the book there is much of interest. But as many questions are raised as answers given.