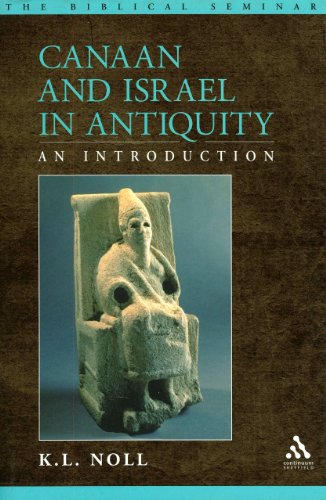 CANAAN AND ISRAEL IN ANTIQUITY: AN INTRODUCTION THE BIBLICAL SEMINAR SERIES

This lucid and engaging book is aimed at the intelligent reader who has not yet encountered academic study of the ancient world’ (13). In a vivid account of life in antiquity and its differences from our own world, the author succeeds in communicating a wealth of detail while carefully explaining terms and concepts. Necessary technical debates about archaeology are not avoided, but everything is made as comprehensible and accessible as possible.

The opening chapters (Canaan and Israel: An Overview; What is ‘History’?; What was ‘History’ in the Perception of the Ancients?) provide a conceptual framework for the following ones, which review history by archaeological ages from pre-Late Bronze to post-Iron II, with special chapters focussing on the tenth century bc and the religions of Canaan. Noll majors on archaeological and anthropological evidence in reconstructing history as he does not regard much of the biblical text as having the intent of conveying factual data. Thus, since ‘no Jewish author mentions an Ezra until about the first century of the Common Era … it is very likely that Ezra is an invented character of relatively late origin, whose story is partially modelled after that of Nehemiah’ (294). On the other hand, Noll is occasionally open to dubious textual sources outside the Bible and so Hecateous of Abdera (fourth century bc), cited in Diodours Siculus (first century bc), is used to reconstruct an alternative exodus story and a further variety of Judaism in the Persian period (297–98).

Despite the volume’s many merits, what most impairs its use as an introduction, particularly as the first book for a student to read on the subject, is almost certainly its dogmatism. Though it interacts with other opinions, at some important points of controversy the author makes a categorical statement without indicating to readers that many would have a quite different definition of a term or view of a debate. Here is a brief selection: ‘Since the ancient Israelites lived in the land of Canaan, they were also “Canaanites” ’ (15); ‘history is not what happened; it is what a teller reports to have happened’ (31); A theory is a hypothesis that is highly probable and therefore tends to be accepted by most competent historians’ (47); ‘philology is the study of ancient literature’ (51); ‘Being called an ‘apiru not a compliment. The word literally means “dust-maker” ’ (124); ‘A myth is any story involving a god or gods that is repeated often’ (241); ‘In a very late Hellenistic text, Daniel. 7:13–14, El is the “Ancient of Days” and Baal is the “One like a Son of Man” ’ (247). Some definitions are just wrong: ‘The Second [read “Third”] Intermediate period had begun by about 1070 bce’ (186); ‘The term for this status was moshiach [read mashiach], which is conventionally translated “anointed one” ’ (210); ‘It was a vaticinia [read vaticinium] ex eventu, which means ‘prophecy after the event’ (275).

Histories of this period adopt different positions and we may reasonably learn from them all. But books aimed at beginners which either foist particular definitions on them or suggest that all sane scholars are more agreed than they are can only have the effect of closing minds too early in the course of study, even if this is not what the author intended. This book would be useful for intermediate students.