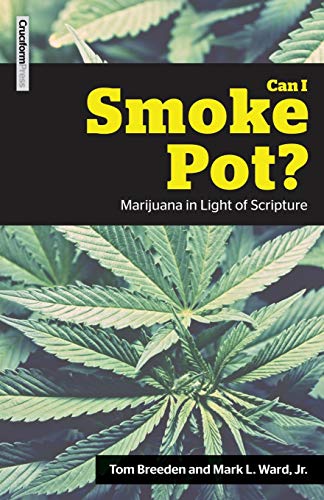 Can I Smoke Pot? Marijuana in Light of Scripture

In this helpful little volume, Breeden and Ward provide a biblical and theological framework for considering the ethics of marijuana use. Along the way, they also provide a mini-seminar in hermeneutics, the role of government, the place of medical research in ethical deliberation, and comparing marijuana use to other drug use. This book is an excellent tool not only for helping laypeople think carefully about an increasingly controversial and relevant question but also for aiding them in developing a biblical sensibility for decision making.

Chapter one provides a creation-fall-redemption context for considering marijuana. Breeden and Ward argue that the goodness of creation means that marijuana must be good, but that fact leaves unanswered the question, Good for what? They take three chapters to answer this question. In chapter two, they provide an overview of the Christian’s relationship to government in order to argue that any recreational use of marijuana is sinful in America because, “at this point in history, not even a state law permitting recreational use of marijuana may be seen by Christians as decisive—because at the federal level, it is still illegal!” (p. 31).

Addressing the question of the medicinal use of marijuana in chapter three, the authors argue that marijuana could possibly be considered palliative medicine, a painkiller of sorts. But even if that were the case, side effects and unintended consequences must be kept in mind. In short, they’re open to the possibility of medicinal use in well-regulated situations if unbiased medical studies can establish that it is the best option.

In the last chapter, Breeden and Ward explore how the parallel between alcohol and marijuana is best understood. They note that “every Christian who favors recreational marijuana use will base his or her argument in large part on what the Bible says about drinking alcohol” (p. 55). If the Bible allows for moderate alcohol consumption, then moderate pot consumption must also be fine. The authors concede that alcohol is viewed as a permissible but potentially dangerous thing in the Old and New Testaments. However, they agree that the place where the Bible draws the line with alcohol is with drunkenness. Once intoxication occurs, sin occurs. From there, they argue that the one thing that turns alcohol into sin (drunkenness) is the only purpose of recreational pot use (getting high). Since research shows that one hit is often enough to produce the effects, there is no possibility of smoking pot “in moderation.” The parallel with alcohol ends there. In the end, Breeden and Ward focus on the spiritual issues at play. Even if all of the contextual factors that might impact the decision are removed (family authority, government authority, etc.), the intoxication question should prevent any Christian from using pot recreationally.

Breeden and Ward provide a “closing word” in which they bring their message to bear clearly by analyzing motivations. For those resistant to their arguments, they ask, “Where does this drive to justify getting high come from? What are you really craving, and why are you pushing this point so hard? Are you effectively seeking a kind of palliative care to soothe some emotional or spiritual pain in your life? A pain that God will gladly soothe if you only draw near to him through his Word and prayer?” (p. 83).

For a short book, this one is incredibly wise and helpful. It even includes a brief “How to Use the Bible to Answer Your Questions” essay as an appendix. While the authors are certain that a longer, more detailed book would reach the exact same conclusions as long as it is faithful to Scripture like theirs is (p. 81), I’m left wondering if more nuance wouldn’t help at least a little bit. To be clear, this is a book aimed at laypeople, not scholars. Yet sometimes the arguments are oversimplified. For instance, Breeden and Ward are very careful not to make medical claims, but at the same time they are very quick to say that inhaling one puff of marijuana is morally equivalent to drunkenness (both are intoxication). This statement seems to require a level of scientific certainty that they’re hesitant to make in the medical chapter—it is difficult enough to establish a line for drunkenness, let alone to apply that to another substance that works in different ways and varies so greatly from strain to strain and person to person. I was also disappointed that they did not explore the medical side of the question more thoroughly. They essentially said, “The jury is out,” but then continually argued against “recreational use” in particular in a way that implied medical use is permissible. Perhaps a longer book would have allowed space to spell these differences out more clearly. Both of my minor quibbles are issues of detail and consistency, and I want to be careful not to level the typical critique of, “I wish they had written a different book!” I’m glad they wrote this one, and these are the sorts of questions it raises.

In the end, this is a book you can confidently recommend to any Christian ministry leaders, parents, and teenagers who are curious about how to think through this controversial issue. They will not only get a solid, biblically saturated answer, they will also learn a lot about how to interpret the Bible as they go.

Jacob Shatzer is assistant professor of theological studies and associate dean of the School of Theology and Missions at Union University in Jackson, Tennessee, USA.