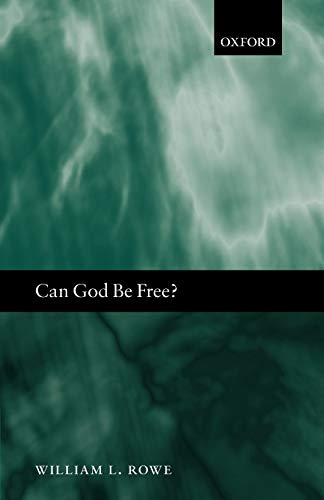 CAN GOD BE FREE?

This book argues that serious problems arise from affirmation of God’s perfect goodness and freedom. Given his perfection, if there were a best world for God to create he would certainly create it. For, as Leibniz wrote, ‘to do less good than one could is to be lacking in wisdom or in goodness’. But if God could not do other than create the best world, he created from necessity, not freely. This raises a problem, for how can we be grateful to God for doing what is necessary and cannot be avoided?

Rowe first examines the views of four influential theologians from the past. Leibniz argued that God must create the best of all possible worlds, but denied that creation was absolutely necessary. Rowe argues convincingly that this is inconsistent. Samuel Clarke admitted that the world is morally necessary, but God alone causes his choice and retains the power to create an inferior world, so God’s choice is not physicallynecessitated. In reply, Rowe argues that Clarke’s discussion obscures the fundamental problem that God could not have produced a different choice, so he really lacks the power to choose differently and so is not free. Rowe then examines Thomas Aquinas, agreeing with Norman Kretzmann that elements of Aquinas’ thought imply that God was not free not to create, although Aquinas held that he was. Rowe queries Aquinas’s arguments for denying that there is a best possible world, but thinks there may be better ones. Finally, Rowe rejects Jonathan Edwards’ claim that freedom is compatible with determinism and his attack on indeterministic notions of freedom, but agrees that Edwards’ theological opponents were inconsistent in claiming that human responsibility is incompatible with necessity while holding that God necessarily does the best.

Rowe next turns to the modern debate, objecting to Robert Adams’ argument that God’s grace means he can choose less than the best. Rowe argues that God could be gracious and still necessarily do the best. Perhaps, though, there is no best choice, but for every creation, there is a better, with no upper limit. It then seems that no matter what God chooses, he could do better. It then seems he must always lack maximal, unsurpassable goodness, for there is no maximum to how good he can be. God cannot do his best, but he could have done better, yet chose not to. Rowe maintains throughout that a perfect creator must choose the best, so believers must either abandon the claim that there is a perfect Creator, or suppose that this is the best of all possible worlds, or one of a set of equal best worlds, in which case God lacks morally significant freedom. Rowe further doubts that our world, with its horrendous evils, is the best that an infinitely powerful, infinitely wise being could do.

Rowe writes in a clear, accessible style on important topics. How might evangelicals respond? The Bible does not specify God’s freedom or goodness philosophically, and traditionally all positive language about God is at best analogical. Divine freedom and goodness therefore need not be identical to created freedom and goodness. Philosophical analyses of freedom have advanced since Jonathan Edwards’ time and could help clarify ways forward. Incompatible creations may not be directly comparable, so God may retain significant choice among very good options. Judgements about the goodness of all creation based on our part alone are questionable. Overall, Rowe’s problems may not be as serious as he thinks, but they certainly stimulate thought.