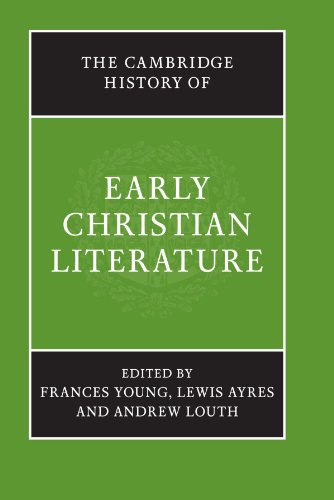 The present volume is a fresh introduction to the early Christian literature up to the mid-fifth century. The editors want to cater for recent interdisciplinary interest in this literature. Its study is no longer confined to church historians, because ‘Feminists have challenged the designation “patristic”, and questions of social identity and social level have become important, together with issues such as the parting of the ways with Judaism, and the process of Christianisation. “Heretics” have been re-habilitated, and their motivations and ideas studied with greater sympathy, especially as they were history’s losers. New material … has occasioned more intensive research. This material can no longer be presented simply as sources for the history of the development of Christian doctrine, important though that project remains’ (xi). In addition, there is a recent growing interest in the early Christian interpretation of both Testaments. The editors describe their approach as follows: ‘Instead of brief introductory articles in alphabetical order … an attempt is made to provide a coherent focus, and to concentrate on the literature, its interpretation and significance, and its context, historical, social, philosophical’ (xii).

The volume has three parts, each consisting of a ‘Literary guide’ (covering ‘the literature of a much broader period and geographical location in relatively briefer compass’) and a section entitled ‘Context and interpretation’, which attempts to enable ‘the generation of a greater sense of perspective than was possible in a series of essays on individual authors, as well as giving an opportunity to explore new hermeneutical questions’ (xii). The combination of both aspects is the strength of this contribution and will reward diligent students who work their way through both sections. It raises issues in the study and appropriation of this body of literature which have not been considered previously to such an extent. On some authors and types of literature the literary guide section is only a good point of departure, and not sufficient for further study.

Part one covers ‘The Beginnings: The New Testament to Irenaeus’. After an introduction to the literary culture of earliest Christianity and a mere nine pages on the NT (with some highly questionable claims for dating the NT!) and the Apostolic Fathers, further essays cover the Gnostic literature, apocryphal writings and Acts of the Martyrs, the Apologists and Irenaeus. After this survey the context and interpretation essays describe the social and historical stetting, the way Christian identity is being articulated and the doctrinal context in which this literature arose and was used by Christians (the same areas are also covered in part two and three).

Part two is devoted to the third century. The literary guide section covers the Alexandrians, the beginnings of Latin Christian literature, Hippolytus, Ps.-Hippolytus and the early canons, Cyprian and Novatian, a survey of earliest Syriac literature and a concluding review by F. Young of the literary culture of the third century. In ‘Context and interpretation’ the social and historical setting is explored (Christianity as culture critique), the articulation of identity, Christian teaching and the significance of third century Christian literature. Part three outlines the ‘Foundation of a new culture: From Diocletian to Cyril’. In addition to essays on the major figures, there are essays on classical genres in Christian guise and vice versa, hagiography, the literature of the monastic movement, texts by and about women and on conciliar records and canons. A final essay by F. Young summarises the interpretation and outlines ways of appropriating this body of literature today by applying post-modern critical theory to it. Bibliography and an index close the volume.

Though it does not follow the traditional format of dictionaries of the Ancient church or patristic literature this stimulating volume can be used for reference to a certain extent. It should be supplemented by a dictionary that provides full coverage of the era (e.g. E. Ferguson, ed., The Encyclopedia of Early Christianity, 2nd ed., New York: Garland, 1998).