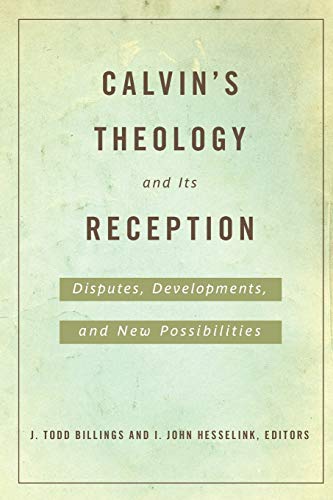 Calvin’s Theology and Its Reception

What should we do with John Calvin? What if, on the way back from dinner, we drove through a wormhole into a parallel universe and found John Calvin sitting on our sofa when we arrived home? What would we do with him once we discovered his identity? What would he do with us? These are the sorts of questions this volume explores. The book is organized in five sections: (1) Revelation/Scripture, (2) Union with Christ, (3) Election, (4) The Lord’s Supper, and (5) Theology of Church and Society. Each section has two essays, the first giving an account of Calvin’s teaching on the topic and the second seeking to suggest how moderns might appropriate Calvin’s theology, piety, and practice.

I. John Hesselink gives a generally helpful survey of Calvin’s doctrine of revelation and Scripture and of its reception by the early Reformed tradition. His essay seems to treat Calvin as a baseline by which to judge orthodoxy and writes as if it is still an open question whether Theodore Beza corrupted Calvin’s theology (p. 19). I thought that question had been settled long ago. In this regard and in others, his account of the scholarship of Reformed orthodoxy is out of date (e.g., pp. 19–23).

Calvin’s doctrine of union has been a matter of considerable interest for decades, and Todd Billings’s work has been clear, insightful, and faithful to the sources. This essay is a good summary of that research. The only minor criticism might be that, were one looking for an early orthodox theologian of union, Jerome Zanchi would seem to be a strong candidate as he was more overtly interested in union than most of his contemporaries. Michael Horton’s survey of and interaction with the secondary literature on union with Christ is a valuable contribution.

Carl Trueman does a fine job of orienting the reader to Calvin’s doctrine of election, to the historiographical issues, and to the early Reformed development. His reminder of the problem of anachronism (p. 106) might have been heeded by other contributors, but more on this below. His brief survey of the differences between Amyraut and the orthodox is especially useful.

Sue Rozeboom’s survey of Calvin’s doctrine of the Lord’s Supper is a useful entry point to Calvin and to the literature on the question. Her reliance on Jill Raitt’s 1972 research on Beza, as important as it was, is puzzling. If one is going to set Calvin against Beza, even if cautiously (p. 163), should it not be done on the basis of primary sources?

Jeannine Olson’s essay on Calvin’s view of church and society is as clear as it is professional and helpful. She is clearly at home with this topic, and the reader will benefit from her expertise. I appreciated her dig at the Weber caricature (e.g., p. 213). David Little’s companion piece is interesting, and he’s surely right that there is a connection between Calvin’s constitutionalist, legal background and later developments. Still, I could not shake the sense that I was reading a bit of Whig historiography. Perhaps it was the claim that Calvin was “unquestionably an apostle of constitutionalism” (p. 225) and the way the American Revolution was made to succeed Calvin’s theory of lesser magistrates?

To those familiar with Calvin and Calvin studies, the topics seem like familiar territory. However, these essays, though brief, are dense and more challenging than one might expect.

From a historian’s perspective, however, the volume raises questions that demand further exploration. The question, “what should we do with Calvin?” is not a historical question. It is a constructive, systematic, ethical question. The editors commend the work of historians in correcting abuses, but they insist that we must “blur boundaries” between history and theology (p. xiii). They write, “there is no tradition-free location from which to interpret Calvin’s writings,” and “[t]here are no disinterested readers of Calvin” (p. xi). The second claim is true enough, but the first and third are debatable.

For all the emphasis of on the reader’s situatedness, the historian’s job is still to call balls and strikes as best he can no matter what his own tradition or his own theological commitments. If that is no longer possible, then departments of history should be put to better use. Further, as significant as Calvin has become in the modern period (far more so than he was during the periods of Reformed orthodoxy), he is not Scripture or even confession. The Reformed orthodox had a healthier view of Calvin: as an important writer but one writer among many. Perhaps it is time to remove Calvin from the perch on which Barth and company placed him and return him to his proper place? The past and present will be better served when we let the past be the past and allow our contemporary projects to stand on their own two exegetical and theological feet.

Nevertheless, taken on its own terms, is the book helpful? Yes, for the most part. The entries are generally engaging. It succeeds well in introducing readers to basic questions in Calvin studies, to the literature, and to some of the questions percolating in contemporary systematic theology. Certainly I wouldn’t hesitate to recommend several chapters in the volume.

What should we do with Calvin on the sofa? The answer to that question depends on one’s job description. The historian and the systematician will ask him different questions, and that is as it should be.